Those are all accurate statements, but they don’t capture the totality of who Crawford is.

True: He is a CEO, and a damn good one, for Movement Mortgage; a nonbank lender he started 10 years ago, which is now a top-10 HMDA lender.

True: He writes LinkedIn posts about how awesome his wife is and what an inspiration she is to him and how he’s the perfect dad with the perfect family – a story that all checks out.

Still. He wears t-shirts to his televised interviews; not very CEO. He played sports at a high level, but rarely brings it up and when he does he talks about it as a mere chapter in his life. Honestly, who plays a Super Bowl and doesn’t describe it as the defining moment in their personal journey? Casey Crawford, that’s who. His family is a big part of his life of course, but he talks about his even larger family — his coworkers — in terms that are just as glowing.

On an early morning in March, Crawford is sitting at his desk at Movement Mortgage headquarters in Fort Mills, South Carolina. His office walls are polished concrete with exposed metal fixtures. The desk itself a big slab of wood cut from a tree that was cleared from the lot he’s sitting on, in order to make room to build the Movement Mortgage building. Writing utensils are all standing at attention on the desk top in a little leather cube; there are no drawers to speak of, and no cabinets — everything is out in plain view, nothing is tucked away.

The opposite wall is a mural of inspirational quotes and profile pics of those Crawford looks up to and the shelf below contains a smattering of awards and photos of his family. Some could describe the office as minimal and cold, yet the simpatico presence of Crawford helps warm the space. His persona, while affable now, will be magnified in a few hours. That’s when he is due to take the stage in front of his 800 or so employees here for a rousing speech. There, he will still be in his t-shirt and jeans, but behind him will be a bright explosion of red, cosmic dust, a background emblazoned with the words, “Love has a name.”

“We’ve started using the word love a lot,” Crawford tells me, in an explanation of his motivations. Is he building some sort of cult of personality? Not at all. But he is trying to tap into a cultural angle and he thinks “love” is his in, and here’s why.

“Friends of mine said working for Bank of America and Wachovia simply drained them of life,” Crawford said. “They just described it at best as ambivalent about the institutions they worked for, but more typically they had animosity for the place that was giving them a paycheck every week.”

It’s part of a larger, cultural problem he wants no part of.

“We want to see people thrive professionally and personally. Our industry is really good at promoting people who thrive professionally. I think we’ve fallen woefully short of seeing people thrive personally,” Crawford said. “Our industry, because there is so much wealth that can be awarded, brings with it a culture of toxicity. It comes at the expense of health and families and their communities.

“We’re still seeing it with Wells Fargo; when sales goals so direct decision-making it leads to things we should never do, we would never do. That’s indicative of the environment they work in, it’s not a comment to say they are bad people. 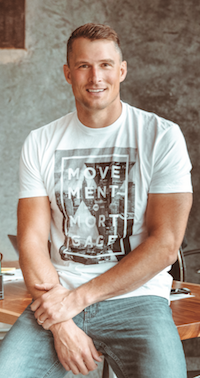 “But can we create a community where we strive professionally to be our best selves and personally make sure we take care of the relationships that are important to our lives?”

You can, as it turns out, and Movement has.

Case in point is the way in which Crawford organized his people to get behind a cause that didn’t involve sales goals at all, but made a huge impact on their personal lives. With 350 people in Tempe, Arizona, and 600 in Norfolk, Movement employs more than 1,500 staffers. Crawford challenged his employees to shrink their personal consumer debt over a three-month period, rallying his employees to the goal.

“Last year we launched a lose-a-million (dollars) challenge. We got everyone Dave Ramsey’s book, financial tees… and we shed a collective  $2.8 million in consumer debt and saved an additional $1.4 million in savings. In 90 days, we transformed the collective, personal balance sheet of everyone in this company, to the tune of $4.2 million.”

But what was even more important than that? The incredible stories Casey heard from his people along the way, expressing the gratitude they had for their employer helping them get a better hold of their personal finances.

“A community, not a company, pulls you in the direction you want to go in life,” Crawford explained. Less debt was a common goal that everyone in the company could get behind, and help each other achieve. In the end, some Movement staffers paid off a credit card for the first time ever. Others paid off student loans.

But none of them used their homes as a piggy bank and reworked their debt via a refi.

That’s a no-no to Crawford and something he doesn’t want to see his customers do either.

Movement does mortgage volume in the $25 billion range, making them a top 10 lender. They’re  No. 6 in purchase, according to HMDA numbers, but that number is lower when it comes to refis. In fact, Movement could probably enter a period of rapid growth, maybe even rub shoulders with the loanDepots and the Quickens, were it to look at its current book of business to refi.

But again, Crawford doesn’t like that approach for either his staff or his clients.

“We don’t look to buy refinance leads. If it makes sense for people, we will do a refinance, if we can save them money. We try not to let people use their houses like piggy banks. I personally love to see people pay off the mortgage we sell them. Being debt-free serves Americans well in their long-term best interest,” he said.

Crawford came out to Charlotte to play for the Carolina Panthers, and fell in love with the city.  After two seasons, the Panthers decided he was the fourth least valuable guy on the team and fired him, so he signed with the Bucs.

Crawford went on to play with Coach Jon Gruden in the SuperBowl: “It was an incredible experience; something any kid who dreams of playing football dreams about.”

“But, I realized I was a backup for when the good players got hurt. So I wanted to invest in my own life in a more significant way other than being just an entertainer — that’s all you are when you play professional sports.”

So the Crawford family moved back to the Carolinas from Tampa and Casey moved into the real estate business, doing hard-money loans and a little bit of real estate development. Crawford  soon  entered into a joint venture with Nation City Bank with partner Toby Harris.

Then in 2007 and 2008 the Charlotte area became significantly impacted by the subprime housing crisis, serving as headquarters to both Wachovia and Bank of America. During this time, Wachovia wiped out and BofA teetered on the brink of collapse while struggling to buy Countrywide.

That’s when it happened.

“I listened to a Bill Dallas CD [Skyline] who said ‘the greatest opportunity in mortgage banking history is just right on the other side of this crisis.’ That made a lot of sense to me, as foundationally this nation is underpinned by its belief in the holding of property rights. In recent times, you see the federal government leveraging the mortgage industry to subsidize credit and spur the economy back on.

“And the largest providers of mortgages, many of them, were just eliminated. Americans still want to own homes and the federal government will still insure them. So who’s going to lend to them? So many banks were in disarray.”

During this time the too-big-to-fails and many private banks became obsessed with refinancing their current book of business, except for Wells Fargo, which was pushing FHA-backed mortgage as the replacement to private capital.

Who was going to look after the purchase market? Crawford asked himself.

Again, this was in 2008, and Crawford sat down at his desk. As the CEO of Movement Mortgage he now had five years of business under his belt.

But being ultra-competitive, he wanted more. He Googled: “How to start a mortgage bank.” The results, and the rest, is history.

Being a mortgage bank ticked all the boxes for the CEO/NFL Athlete/Super Family Guy. He had a plan for his bank and he now had a dream for his people: To love the American Dream.

“My Catholic priest, Father Ed, back in high school used to say: ‘To love someone is to act in the long-term best interest of another.’ So, what would it look like if we loved our customers?”

That dream began to lead a lot of decisions. A huge driver is this: Treat your customer like they are your family.

Crawford instructs his people to tell them: “Give me all the documents upfront, let’s let the underwriter look over it and we can see how much house you can afford, before you even begin looking. Fully underwritten loans before you even go shopping. That’s the right thing to do for the American people.”

Then it takes six hours to underwrite, seven days to process, one day to close. The formula is easy for borrowers to follow and efficient for real estate agents and loan officers.

“That became our competitive advantage. We spread the word out to Realtors and loan brokers on how we positioned ourselves to look different from our competition and to show how we loved our customers through the entire mortgage process,” Crawford said.

It worked. Now Crawford spreads his message of success through ever-growing channels, from regular CNBC appearances to writing native posts for LinkedIn. In one such post he extolls the virtues of working out with your significant other to help build a better you. And how that same theory also works in business.

In that article he writes:

“Whether you’re at your gym or your job, teamwork is critical. At the office, you must work closely with your teammates in order to meet deadlines and achieve goals. The Navy Seals, for example, place incredible emphasis on teamwork, which is why they assign each person a ‘swim buddy’ to hold the other accountable in the field.

“This accountability helps drive you beyond yourself as you refuse to let your teammate down. Teammates can also encourage one another. They can have different and complimentary gifts. In a partner workout, you may be good at running, while your teammate is strong at pull-ups. Together, the two of you can help each other navigate obstacles.”

But the last whistle is far from being blown for Crawford, and Movement is where he’ll stay. More and more, he’s taking his message to new audiences.

“We spend a lot of time in Washington, talking to the CFPB, to the GSEs, asking how can we do more to support homeownership. We all know that owning a home is one of the greatest builders of wealth in this country and the greatest stability for families. Both of these, we are currently in dire need of.”

He won’t quit and he will win. After all, it’s in his very nature. 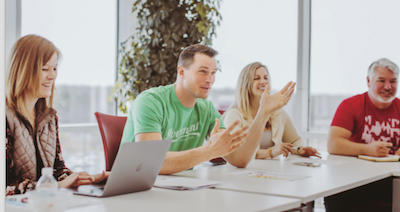