Whether it’s ranking America’s highest rates of real estate appreciation or just its highest real estate, Washington and Colorado are top of the heap.

Those states, which coincidentally have eight of the 10 highest peaks in the continental U.S., have six of the 10 Metropolitan Statistical Areas topping the recent March 1, 2018 VeroFORECAST projections from Veros Real Estate Solutions.

This is the 15th year that VeroFORECAST has provided these data-rich projections to help U.S. lenders anticipate risk and facilitate loan portfolio management. This most recent report is based on data from single-family residences, condos and townhouses in 342 MSAs. That equates to nearly 1,000 counties, over 13,600 ZIP codes, and approximately 82% of the nation’s population.

In last week’s column I drilled down into what is driving Seattle’s long run of property value appreciation. This week, we upturn our gaze to the mile-high city of Denver and the high-performing Denver-Aurora-Broomfield, Colorado metro area.

THE NUMBERS ON DENVER-AURORA BROOMFIELD

The 12-month projected appreciation rate of 9.9% for the Denver-Aurora-Broomfield metro area puts it fourth among the 342 MSAs included in the March Q1 2018 VeroFORECAST report. This shows a half-percent rise in the projected appreciation rate from the previous report in December 2017, when this MSA was the sixth highest (behind a solid top five in Washington State) at 9.4%. By comparison, three years earlier, in the December 2014 report, the Denver-Aurora-Broomfield MSA was 17th on the list at just 6.9%.

This is one of the strongest markets in the country, with an extremely tight supply of homes at approximately 1.4 months and a population, currently at 2.81 million, that continues to grow rapidly. Its impressively low unemployment rate is 2.9% and, according to DataUSA, the median household income grew 5.1% between 2014 and 2015.

Charting Colorado home price fluctuations, since the beginning of this century, alongside those in New York, California and the nation, shows that the Centennial State took the shallowest dip as a result of the financial crisis beginning in late 2007. Even with that relatively mild depression, the state is now enjoying property appreciation rates that rival California’s. And, as our newest VeroFORECAST shows, no California metro is projected to outpace Denver-Aurora-Broomfield over the next 12 months. 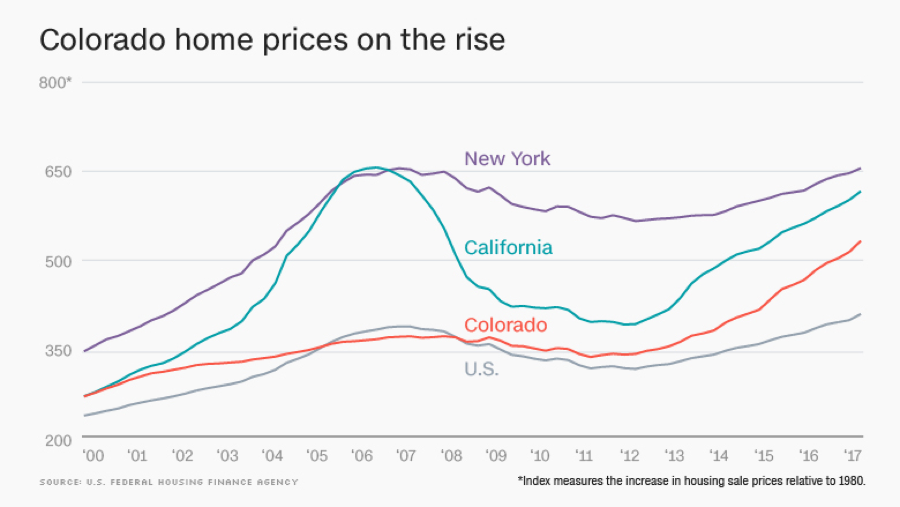 According to the National Association of Realtors, the median property value in the Denver-Aurora-Broomfield MSA, which includes Denver County, Arapahoe County, and Jefferson County is $414,700. DataUSA’s most recent home ownership figure was over 62%. With extremely limited inventory, it’s a seller’s market. According to Apartmentlist.com, there isn’t any relief in the rental market, either. Denver rents are 12.6% above the national average and the statewide median monthly rate has risen more than 20% since 2014.

THE VIEW FROM THE FIELD

“In Denver’s scorching-hot real estate market, the supply of homes is no longer measured by traditional standards such as months of inventory, but in numbers of days,” said Anthony Rael, a RE/MAX Alliance broker in Arvada, Colorado. “Currently we are at ten days for homes priced from $200,000 to $399,999 and three weeks for homes priced between $400,000 and $499,999. The scarcity of available inventory is turning potential buyers into MMA fighters as they savagely negotiate to purchase a single property. In the higher priced Luxury Market, year-to-date sales of million-dollar plus homes have tripled during the last four years, which is a contributing factor in the latest record-setting average sales price for the Denver metro area.”

Rael added, in regard to his MMA reference, that buyers in his market have been offering “seller assurances” to guarantee a certain cash out-of-pocket amount if the property appraisal comes in short. So in the case of a property listed at $300,000 that gets pushed to $350,000 with an appraisal at $325,000, the buyer is now contractually obligated to make up the $25,000 difference, guaranteeing the seller the $350,000.

“Additional pot-sweeteners buyers have used to sway sellers,” Rael said, “are offers of tickets to Hamilton and Broncos games, expensive dinners, weekend getaways and so on…”

GET ALL THE DATA

Additional forecasts and infographics for U.S. markets are available for download and upon request. Visit Veros.com for the full VeroFORECAST report. Real estate and mortgage professionals and those in the financial services sector who wish to receive either the complete quarterly reports or regional reports as they are released can subscribe. For more information email [email protected] or call 714.415.6300, option 6.