Housing starts increased in November, rising nearly 13% from the year before to the highest pace since October last year, according to the latest report from the U.S. Census Bureau and the U.S. Department of Housing and Urban Development.

Privately owned housing starts increased in November to a seasonally adjusted annual rate of 1.3 million, up 3.3% from the revised October estimate of 1.26 million and 12.9% above the November 2016 rate of 1.15 million.

One expert explained this surpassed analysts expectations, but could still be elevated due to the recent hurricanes.

However another expert said this increase was not due to the hurricanes, but shows builders are rising up to meet growing homebuyer demand.

“Housing starts and permits for November both exceeded consensus estimates, boosted by the highest number of single family starts since September of 2007,” PwC Principal Scott Volling said. “This is a positive sign as it shows builders continuing to shift focus to the pent up demand in the single family segment, which should benefit consumers as more inventory enters a tight market.”

“With the impacts from hurricanes Harvey and Irma now largely in the rearview mirror for builders, this is the second straight month of strength in both starts and permits and a trend we expect to continue into what may be the strongest spring selling season since before the recession,” Volling said.

The chart below shows that besides the increase around October 2016, housing starts remain higher than any other point since November 2012. 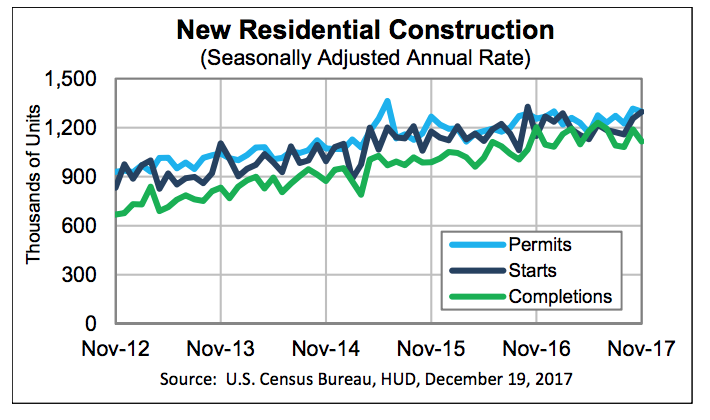 However, privately owned housing units authorized by building permits decreased slightly in November, falling 1.4% from last month’s 1.32 million permits to an annual rate of 1.3 million. But this is up 3.4% from 1.26 million permits in November 2016.

One expert explained that while the developing trend is positive, there is still room for more growth.

“A welcoming trend is developing in the housing sector as builders are able to bring more supply to the market on a consistent basis,” said Lawrence Yun, National Association of Realtors chief economist. “The latest monthly figure of near 1.3 million annualized housing starts is solid, and the growth is mostly coming both in the West and for single-family homes.”

“There is still more room for improvement, as the latest figure is still not yet at the long-term 50-year average of producing 1.5 million units per year,” Yun said. “If this rising trend continues, the worst of the supply shortage could soon end, which would help slow price appreciation in 2018. That would be a huge, welcoming relief for renters seeking to become homeowners.”

Privately owned housing completions came in at a seasonally adjusted annual rate of 1.12 million in November. This is down 6.1% from Octobers 1.19 million and 7.2% below the November 2016 rate of 1.2 million completions.

Even single-family completions decreased, falling 4.6% from October’s revised rate of 788,000 completions to 752,000 in November.

And one expert pointed out that despite the decrease in housing starts and permits, the year will finish higher than 2016.

“Homebuyers hoping for a large boost in new housing supply as a holiday gift are likely disappointed with today's homebuilding numbers, as both permits and completions were down in November,” Trulia Chief Economist Ralph McLaughlin said. “However, they should despair not: each indicator – permits, starts, and completions – is on pace to finish 2017 at higher levels than last year, which should help boost inventory in 2018.”

The Federal Housing Finance Agency is requesting industry input on its strategic plan for fiscal 2021 to 2024, the regulator said in a statement on Tuesday.