Overall, housing starts decreased in September, however, single-family housing completions showed double digit growth, according to the latest report from the U.S. Census Bureau and the U.S. Department of Housing and Urban Development.

“September housing starts brought the second streak of three monthly declines in 2017, driven by a fall in both single-family and multifamily starts,” Trulia Chief Economist Ralph McLaughlin said. “While notoriously volatile, this trend is something we will continue to keep an eye on throughout the remainder of the year.”

The chart below compares the total number of permits, starts and completions in new residential construction. 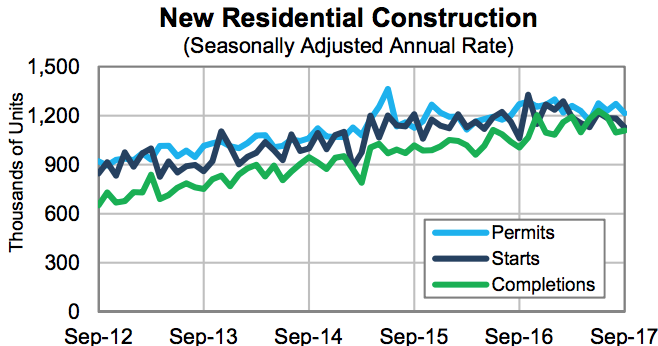 After the slight dip in housing starts in August, September’s decrease in building permits suggests this overall drop may continue throughout the next few months. However, single-family permits are up.

“Given the relatively small number of homes for sale, it’s surprising that single-family starts haven’t trended more sharply higher this year,” Nationwide Chief Economist David Berson said. “Still, despite September’s decline, single-family starts were almost 6% above year-ago levels for the month and for the first nine months of the year they are up by more than 9% over the same period in 2016.”

“It is likely that single-family starts will rise again over the remainder of 2017, as homebuilders respond to still-strong housing demand – as evidenced by yesterday’s rise in the NAHB Housing Market Index for October,” Berson said.

One expert explained this increase in single-family permits could show the new construction market is beginning to once again gradually increase.

“Given that seeing reliable trends takes three months for permits and six months for starts, it’s still likely the trends for new homes starts are continuing to slow, while permits are increasing, indicating new home construction may be resuming its gradual, though uneven rise that we've seen for the past five years,” said Robert Frick, Navy Federal Credit Union corporate economist. “The new home market in general is under pressure from higher labor and lumber costs, and not enough lots zoned and available for construction.”

“Homebuyers are facing relatively few houses on the market that are selling fast and rising about 6% per year in price,” Frick said. “That's hampering Millennials from buying their first home and is contributing to the record low number of Americans moving. And the number of new homes on the market each month is still a solid 25% lower than what is needed to restore a reasonable balance between supply and demand.”

One expert explained that while some of this month’s drop can be blamed on the recent hurricanes, there was still a significant decrease in the Western U.S. that can’t be explained by the hurricanes.

“The one-month fall in new home construction, especially in the South region in light of Hurricane recovery, is understandable,” said Lawrence Yun, National Association of Realtors chief economist. “What is frustrating and hard to comprehend is the sharp drop in total permits in the West region.”

“Home prices have been rising too fast in the West, and several metro areas are in dire need of new home construction,” Yun said. “If housing shortages continue, along with the commensurate affordability challenges, then expect new job creation to begin shifting away from the West to other parts of the country.”