According to the government-sponsored enterprise, market-related impacts remained low as market spreads were relatively unchanged and the implementation of hedge accounting offset most net losses arising from changes in interest rates.

This is compared to the first quarter when Freddie Mac attributed its decline in the company’s first quarter 2017 results to a reduction in market-related gains.

“This transformation is enabling us to better deliver on the mission that is our purpose – to provide liquidity, stability and affordability to the American primary mortgage market. We’re doing that by helping lenders of all sizes compete which, in turn, expands affordable housing opportunities for borrowers and renters nationwide,” he said.

“Additionally, through our award-winning credit risk transfer programs, we’re fulfilling our mission with much less risk to taxpayers than in the past,” said Layton. “We at Freddie Mac are proud of the work we're doing and proud of the success we're having in making home possible for millions of Americans and in building a better housing finance system.”

Once again, the applicable capital reserve amount is $600 million for 2017 and will be zero beginning on January 1, 2018.

The chart below shows the aggregate cash dividends paid to Treasury. 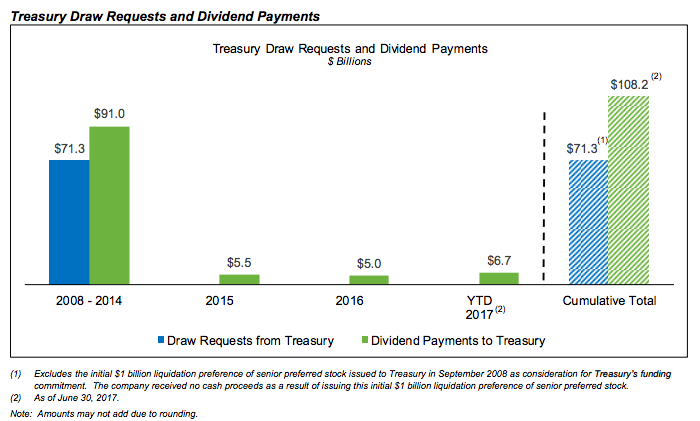 Freddie Mac attribute the increase in adjusted guarantee fee income from the prior quarter to higher amortization of single-family upfront fees driven by an increase in loan prepayments during the second quarter of 2017.

Also, adjusted guarantee fee income increased slightly when compared to the prior year driven by continued growth in the total guarantee portfolio. 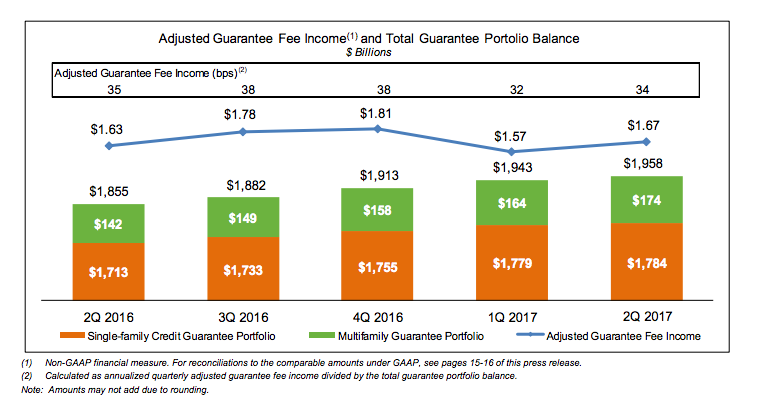