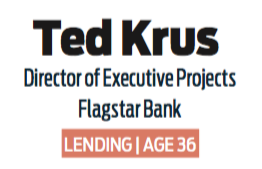 As director of executive projects for Flagstar Bank, Ted Krus has led the sale of more than $1 billion in high-risk, underperforming assets. This move transformed the bank’s balance sheet and resulted in the lowest level of non-performing assets in Flagstar Bank’s 30-year history.

Krus, who has worked at Flagstar since 2014, also led the project to create the Michigan-based bank’s appraisal panel for its retail mortgage channel, enhancing the customer experience and overall quality of originations. Krus also serves as an M&A core leadership team member for Flagstar, evaluating acquisitions for the bank, including its most recent acquisition, Stearns Lending, in April 2017.

Krus also oversaw and completed a project with the company’s vendor services for the physical and electronic storage of the bank’s records management functions, resulting in reduced costs and increased efficiencies. 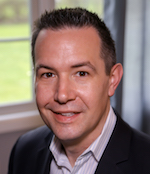 WHAT'S THE BEST PIECE OF ADVICE YOU HAVE EVER RECEIVED?

“It is not necessary to do extraordinary things to get extraordinary results.” This quote from Warren Buffett has always resonated with me. Details matter. Being able to see the big picture and put all the details together matters —and usually brings success.