The average time to close a loan in 2016 fluctuated around the high 40s, but this is no longer the case, according to the latest Origination Insight Report from Ellie Mae.

The survey found that the average time now sits at the lowest level in two years, coming in at 43 days in March, down from 46 days in February. This is the shortest time to close since February of 2015.

After the implementation of the Consumer Financial Protection Bureau’s TILA-RESPA Integrated Disclosure rule last year, the industry became hyper focused on the average time to close a loan. The time eventually started to level out around the high 40s, as the chart below shows. 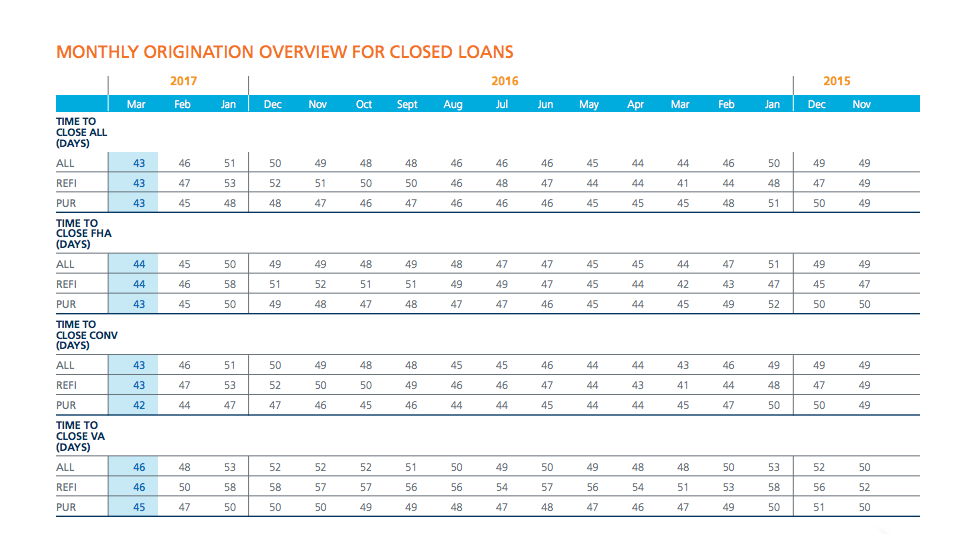 The Origination Insight Report uses data from a sampling of approximately 80% of all mortgage applications that were initiated on Ellie Mae’s loan origination system, Encompass.

In addition, home loans for purchases increased to 63% in March, up from 57% the month prior. This doesn’t come as a surprise since refinance applications have been on a downward trend.

Jonathan Corr, president and CEO of Ellie Mae, commented on the report stating, “The purchase market continued to heat up in March, representing 63% of total closed loans.”

“We also saw the time to close shrink to the shortest duration since February of 2015 at 43 days across all closed loans, purchases and refinances, as Ellie Mae lenders automate more mortgage processes to improve efficiency, quality and compliance,” he continued.