Texas’ housing market is as hot as the state’s scorching summer heat, as the market reaches new peaks in sales and home prices, seemingly to endless heights and unending demand.

A new report from the Texas Association of Mortgage Bankers provides an in-depth look at the people who are snagging a piece of the pie in the quickly growing housing market.

And buyers aren’t alone. Lenders are also eyeing the market and making sure they don’t miss out on the business opportunities. Movement Mortgage Market Leader Dana Allen previously said in an interview that Texas in general is a hotbed for business. “Many mortgage companies are trying to come in and capture some of that,” said Allen.

"The profile of Texas homebuyers is as diverse as Texas itself, continually broadening as the demand for Texas real estate grows," said Vicki Fullerton, chairman of the Texas Association of Realtors. "At the same time, rising home prices, lower household incomes, and tight lending standards are making it increasingly difficult for some Texans to afford a home."

Unlike past report, the report stated that the 2017 edition of the Texas Homebuyers and Sellers Report reveals a growing diversity in the profile of Texas homebuyers. “As the demand for Texas real estate has grown over the last several years, so has the diversity of ethnicity, age and composition of households purchasing a home in Texas,” it stated. 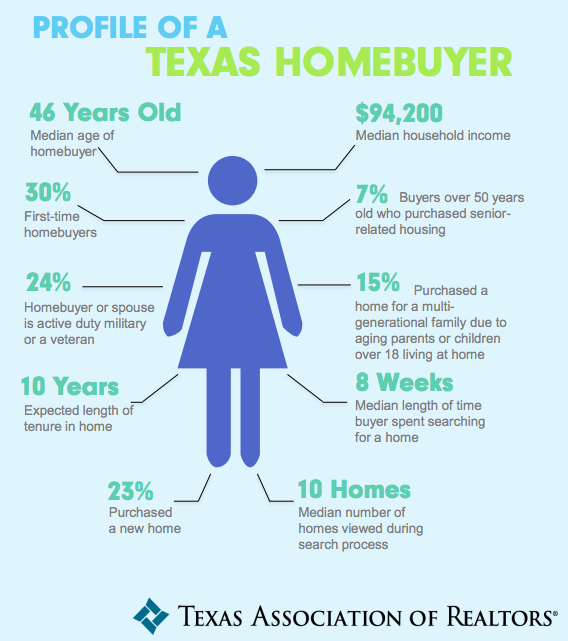 This next chart depicts what the typical house people are purchasing looks likes.

The chart reinforces affordability concerns in the state, noting that the median household income among Texas homebuyers fell nearly 3% year-over-year to $94,200.

Furthermore, the median home price paid among Texas homebuyers was $214,000, which is significantly higher than the Real Estate Center at Texas A&M University's estimation of $150,000 as a typical home price for entry-level and first-time homebuyers.

A recent report from Fitch Ratings suggested that not only is Texas one of the few states where home prices are not only unsustainable, but they’re overheating.

As for the buyers that are able to lock in a home in the hot market, feel free to check out the full TAMB report.