President Donald Trump officially announced his budget proposal that would, among many other cuts, slash $6.2 billion from the U.S. Department of Housing and Urban Development’s funding.

But HUD isn’t the only agency to receive less funding under the new budget plan – some agencies were even defunded entirely.

Within the housing market, one of the independent agencies that will be completely defunded is Neighborhood Reinvestment Corp., also known as NeighborWorks America.

NeighborWorks America is a congressionally chartered nonprofit organization that supports community development in the United States and Puerto Rico and provides access to homeownership and to safe and affordable rental housing.

When asked about Trump’s budget proposal, this was NeighborWork America’s response:

The NeighborWorks America model is an example of successful public-private partnership with a decades-long track record.

In fiscal year 2016 alone, NeighborWorks America financial and technical support provided to the more than 245 nonprofit businesses that comprise the NeighborWorks network has:

Investment by NeighborWorks America into these nonprofit organizations is leveraged with other capital from the private sector, delivering billions of dollars of overall economic impact annually and adding to the security of rural, urban and suburban communities all across America.

In June last year, the agency awarded $40 million to 21 state housing finance agencies, 19 HUD-approved housing counseling intermediaries and 60 community-based NeighborWorks organizations to provide counseling to families and individuals who are working with their servicers to avoid foreclosures.

And back in 2013, NeighborWorks announced its foreclosure program rescued 1.6 million homeowners from losing their home. That same year, it ranked No. 3 among the top-100 homebuilders.

This chart from Bloomberg shows the funding cuts for all programs as well as proposed increases in the budget: 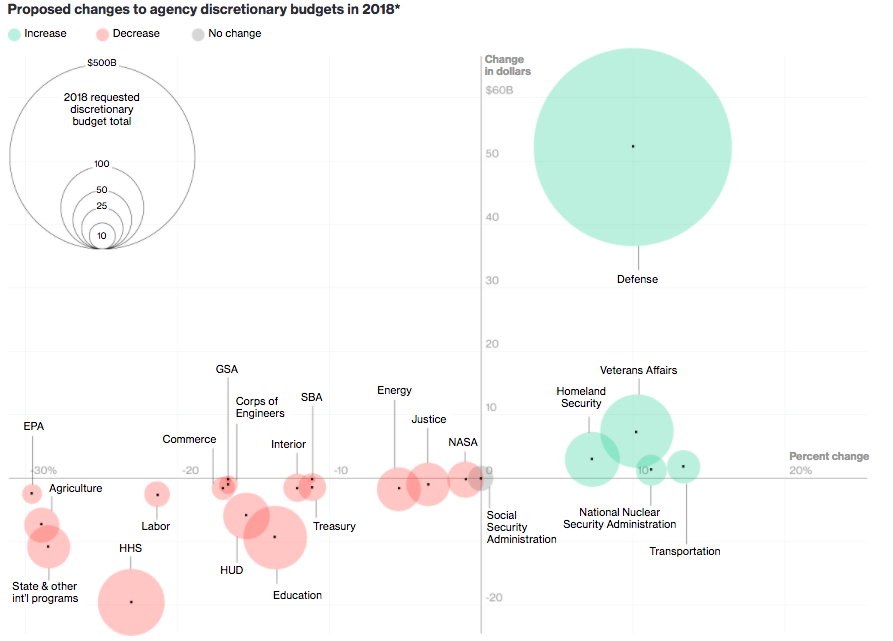 Here’s the complete list of programs Trump’s budget would cut, according to an article by Elaine Godfrey for The Atlantic:

And to see 61 other programs the budget will defund, click here.