For all the consternation during the presidential campaign about whether people should take Donald Trump at his word, in his first few weeks in office, President Trump is following through on many of the promises he made while he was candidate Trump.

One of those promises was a massive deregulation effort that is indeed now taking place in the White House, as well as in both houses of Congress. And while there are many moving parts still to be sorted out, it’s clear that deregulation in some form is likely, if not a sure thing.

But what will the impact of that deregulation be? A new report from Fitch Ratings delves into the various deregulation movements that are afoot and how each will change the financial world.

As mentioned above, one of the main tenets of Trump’s campaign was a promise to reduce regulations. Back in August, Trump told the National Association of Home Builders that overregulation is a “big problem,” and pledged to bring a “massive cut” to regulations if he became president.

Trump continued that pledge after being elected, with his transition team declaring that the Trump administration planned to “dismantle” the Dodd-Frank Wall Street Reform Act.

And now that he is in office, Trump is living up to that promise. Already in his first weeks in office, Trump said that he wants to cut all regulation by 75%, and followed that with the signing of an executive order that stated that for each new regulation issued by the government, two older regulations must be eliminated.

Trump appears to be moving in lockstep with the rest of the Republicans on Capitol Hill when it comes to deregulation, as Vice President Mike Pence and House Financial Services Committee Chairman Rep. Jeb Hensarling, R-Texas, both declared recently that dismantling Dodd-Frank remains a top priority of the Trump administration.

Hensarling is leading an effort in the House of Representatives to overturn Dodd-Frank and replace it with the Financial CHOICE Act, which would “end taxpayer-funded bailouts of large financial institutions; relieve banks that elect to be strongly capitalized from ‘growth-strangling regulation’ that slows the economy and harms consumers; and impose tougher penalties on those who commit fraud as well as greater accountability on Washington regulators.”

And in the Senate, three Republican senators introduced this week a bill that would replace the single director of the Consumer Financial Protection Bureau with a five-person bipartisan committee.

Fitch’s report states that not all of these efforts are likely to come to pass, and analysts David Weinfurter and Joo-Yung Lee write that they don’t expect a full repeal of Dodd-Frank, but the analysts suggest that that Hensarling’s Financial CHOICE Act is a good blueprint for how the Republican majority in Washington will deregulate.

“The architecture of U.S. financial regulations is broad, deep and complex, and any efforts to change the structure and/or provisions require significant legal review,” the analysts write. “For that reason, the White House and congressional Republicans will most probably build on previous regulatory reform efforts.”

They peg the Financial CHOICE Act as the “most logical starting point” for regulatory reform.

One of the biggest changes in the Financial CHOICE Act is the modification to several significant financial regulators, including the CFPB, the Federal Housing Finance Agency, the Securities and Exchange Commission, the Office of the Comptroller of the Currency, the Federal Reserve, and many others.

“Under the proposal, CFOC would retain many of the elements of the CFPB but would be constrained in its authority. It would subject the CFOC to appropriations and greater congressional oversight, and the mandate would be widened to include strengthening market participation and competition while also protecting consumers,” Fitch’s analysts write.

“Financial institutions, particularly non-bank financial institutions, could see an earnings benefit through lower compliance costs related to CFOC and potentially fewer fines from CFOC investigations, although this could be accompanied by weakening control frameworks relative to current standards,” the analysts add.

Click the image below for other potential changes to regulators and the expected impact of those changes, courtesy of Fitch’s report. 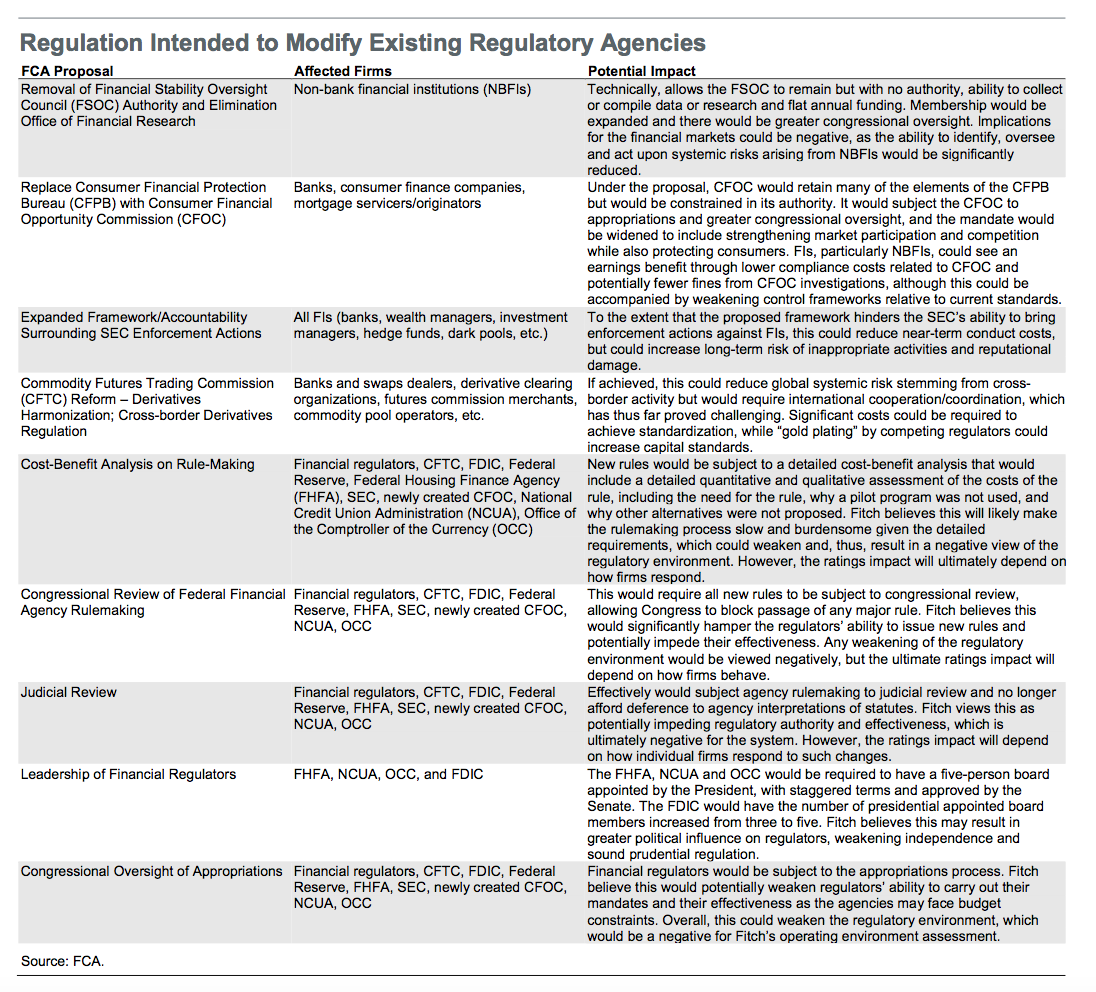 Fitch’s report also suggests that there could be some changes to the existing market infrastructure, with reforms potentially coming to the Federal Reserve and other entities.

Click the image below for a look at those changes and the potential impact, again courtesy of Fitch’s report.

“The FCA does not call for a broad elimination or consolidation of any of these entities. Rather, it focuses on governance and control issues, i.e. board/commission structure and appointments, congressional oversight over budgeting and cost benefit analyses of proposed rules,” the analysts continue.

“Critics have charged that this landscape may be overly cumbersome, duplicative in places and unnecessarily expensive,” they add. “Therefore, it seems less likely that the regulatory landscape will change significantly but rather that leadership, decision rights, processes and Congressional involvement/control will likely change.”