[Update 1: The image in this article was originally presented by Joan Trice of the Alterra Group at the AEI and CRN conference in October 2016. The previous image is now replaced with the original and properly attributed to the correct source.]

Recent data from Ellie Mae showed that it takes about a month and a half on average to close a mortgage loan.

Several speakers at Wednesday’s housing summit hosted by the Urban Institute and CoreLogic, including Quicken Loans CEO Bill Emerson, said that closing times could conceivably be much shorter than that, even as little as 10 days.

So what’s keeping lenders from closing a loan in a week and a half instead of a month and a half? Appraisers.

In several of the afternoon sessions at the "Data, Demand, and Demographics: A Symposium on Housing Finance" event, the subject of the appraisal industry and the delays that come with the appraisal process as it drags on closing times came up.

Several speakers noted that the technology exists to close a loan in a much shorter period of time than the current industry standard.

But the speakers weren’t blaming the appraisers for the delays. Instead, it’s all the other factors that the appraisal industry faces, regulatory challenges first and foremost, that cause delays in the home appraisal process.

“How much time does someone inside a lender actually work a loan file in the 30 days it takes to close a loan?,” Emerson asked the crowd of housing insiders. “3-5 days,” he answered. “There’s a lot of time that can be taken out of that process. But it’s going to take a lot of work to get to 15 days, let alone, 20 days or 25 days.”

The "lot of work" Emerson is referring to is the cumbersome appraisal process, which is hamstrung by a spider web of regulatory oversight that makes it hard to improve the process.

Click the image below to see the regulatory environment that the appraisal industry faces. 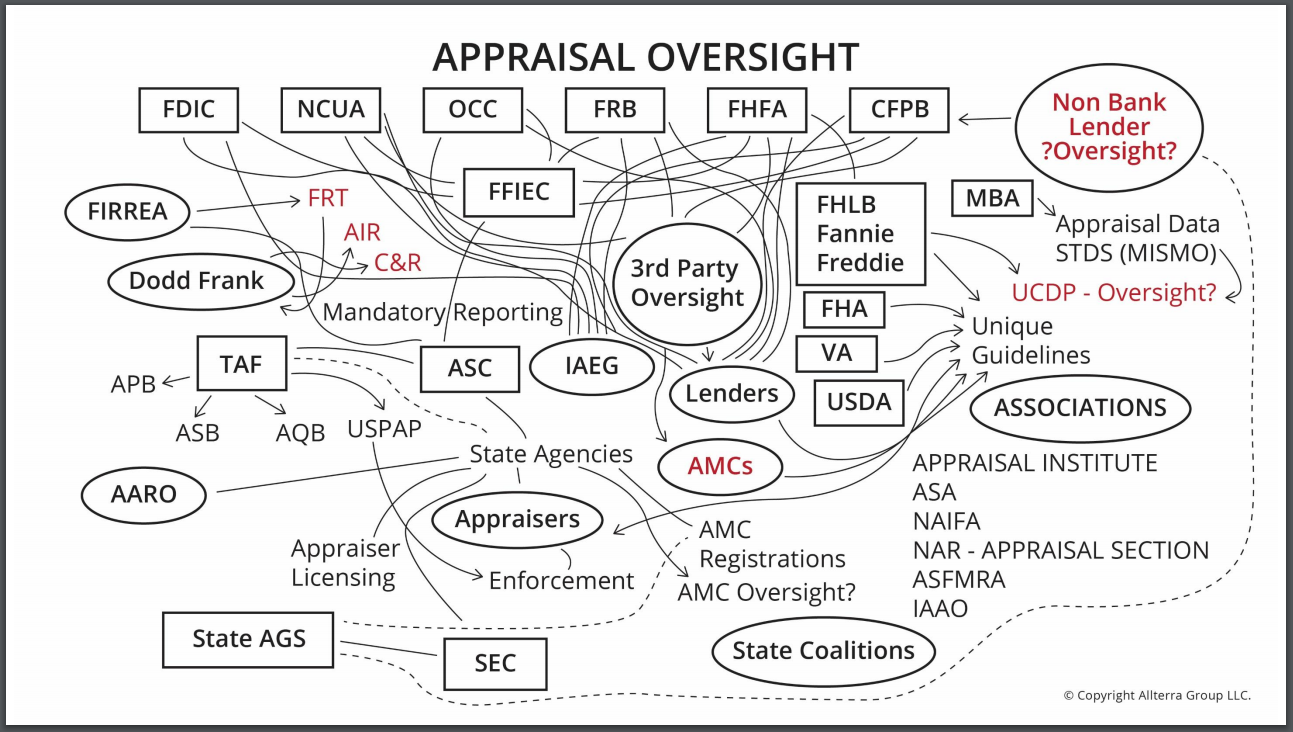 “It’s safe to say that not enough has changed in the ways that appraisals are conducted in the last 20 years,” Petkovski said. “You’d be surprised how much time appraisers spend looking for data,” he added, noting that the process is better now given the current availability of data, but still not fast enough.

“Everyone knows that the appraisal is the long pole in the tent of the mortgage process,” Petkovski said.

Petkovski also said that he expects to see a shortage in appraisers in the coming years, which would further complicate the process.

“We won’t just see it in rural areas,” Petkovski said, “we’ll see it in major metro areas too.”

Also joining Emerson and Petkovski on the last panel of the day was Brian Faux, the CEO and cofounder of Morty, an online mortgage broker startup.

Faux echoed Emerson’s sentiments about the time to close a loan, saying that closing times could be much faster if the appraisal process worked faster.

Earlier in the day, Nela Richardson, the chief economist at Redfin, noted a significant disconnect between the housing market and the mortgage market.

“Our mortgage finance system is not keeping up with the housing market,” Richardson said. “In some places, houses sell in 6-8 days. There’s no time for a Federal Housing Administration loan in that environment. Cash rules in those situations.”

Petkovski said one way to address the problem is to empower appraisers to do their jobs. “We need a reduction in the back and forth that exists in appraisals,” Petkovski said.