The federal government revealed Wednesday that its investigation into foreign buyers using high-end U.S. real estate as a means to launder money found that potentially illicit activity is behind a “significant” portion of the cash transactions in Manhattan and Miami, and plans to expand the investigation into several other areas.

Earlier this year, the Treasury Department’s Financial Crimes Enforcement Network stated that it was “concerned about illicit money” being used to buy luxury real estate, and planned to begin identifying and tracking the previously unknown buyers who used shell companies to hide their identities.

At the time, FinCEN issued a “Geographic Targeting Order” that required title insurance companies in Manhattan and Miami-Dade County to identify the actual person behind shell companies used to pay all cash for high-end residential real estate in those two areas.

In a call with reporters on Wednesday, a FinCEN official stated that more than 25% of transactions covered in the initial inquiry involved a “beneficial owner” that is also subject of a “suspicious activity report,” which is an indication of possible criminal activity.

“In particular, a significant portion of covered transactions have indicated possible criminal activity associated with the individuals reported to be the beneficial owners behind shell company purchasers,” FinCEN said in an associated release.

FinCEN said that the findings of the initial investigation corroborate its concerns that all-cash transactions are “highly vulnerable to abuse for money laundering.”

FinCEN also stated that the initial investigation proved fruitful for both federal and state law enforcement agencies, which reported that information generated by the orders provided “greater insight on potential assets held by persons of investigative interest and, in some cases, has helped generate leads and identify previously unknown subjects” for further investigation.

“The information we have obtained from our initial GTOs suggests that we are on the right track,” FinCEN Acting Director Jamal El-Hindi said Wednesday, but FinCEN noted that the agency remains “concerned” about the use of shell companies in all-cash real estate deals in other areas beyond the initial investigation.

To that end, FinCEN announced Wednesday that it plans to expand the initial investigation into foreign cash buyers beyond Manhattan and Miami to six additional major metropolitan areas.

According to FinCEN, it will soon require all U.S. title insurance companies to reveal the individual behind all-cash, high-end real estate transactions in the following areas:

“By expanding the GTOs to other major cities, we will learn even more about the money laundering risks in the national real estate markets, helping us determine our future regulatory course,” El-Hindi said.

Click the image below for a look at the dollar threshold for all of the metro areas that are a part of the expanded investigation. 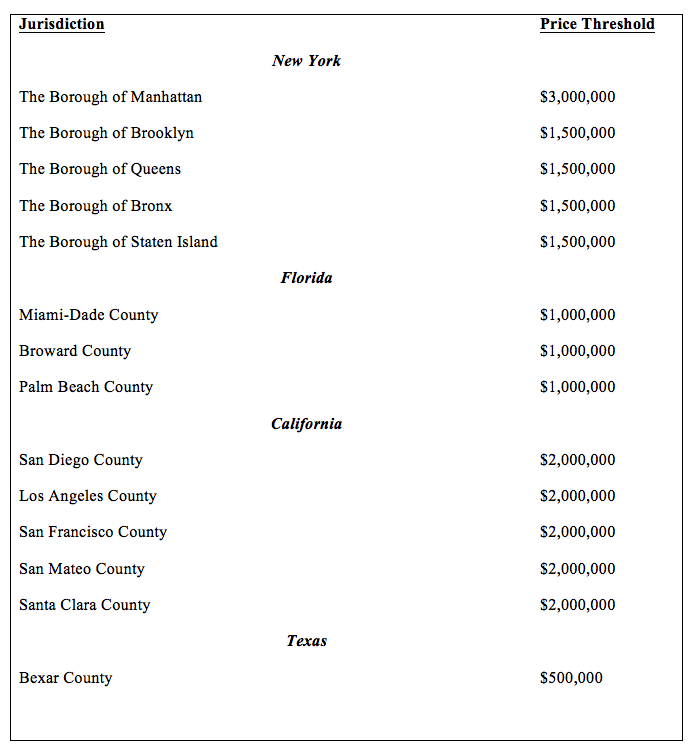 On the call with reporters, a FinCEN official stated that there are various reasons why those six areas were selected, including: the prevalence of shell companies used in all cash transactions in each area; whether the luxury market in that metro area is attractive to foreign buyers; and information provided by law enforcement.

It’s exactly the opposite, FinCEN said.

“The GTOs do not imply any derogatory finding by FinCEN with respect to the covered companies,” FinCEN continued. “To the contrary, FinCEN appreciates the continued assistance and cooperation of the title insurance companies and the American Land Title Association in protecting the real estate markets from abuse by illicit actors.”