A new study released this week by the National Community Reinvestment Coalition shows that race is still a significant factor in mortgage lending in two major U.S. metro areas.

According to the NCRC study, the racial composition of a neighborhood is a strong predictor of mortgage activity in St. Louis and Milwaukee. Basically, the study found that in both cities, more mortgage lending is done in primarily white neighborhoods compared to minority neighborhoods.

The NCRC study found that for the Milwaukee metropolitan statistical area, whites represent 70% of the population, but receive 81% of the mortgage loans. African Americans, on the other hand, make up 16% of the area’s population but only received 4% of the mortgages.

“Without access to responsible mortgage credit and the opportunity to become a homeowner, the ability for working people to build wealth is severely curtailed,” Taylor continued. “Until our financial institutions make a full and genuine commitment that creditworthy borrowers, regardless of their skin color, will be able to access responsible credit, the economies in these neighborhoods will continue to deteriorate.”

The NCRC study focused both on the larger metro areas of St. Louis and Milwaukee as well as the cities themselves.

In both metro areas, the population is “hyper-segregated,” with the majority of the area’s white population concentrated together and separate from the minority population.

According to the study, most neighborhoods of North City have more than 80% African American residency, while many neighborhoods in the southern portion are majority white.

African American-majority neighborhoods also extend from North City to suburbs in the northwest, such as Ferguson, and across the river into East St. Louis in the state of Illinois, the study found. “These areas form a contiguous segregated zone of disinvestment and concentrated poverty,” the NCRC said in its study.

“In the City of St. Louis itself, the racial composition of the neighborhood is a strong predictor of mortgage activity, becoming nearly as important as neighborhood income in its predictive capability,” the NCRC study showed. “As the percentage of white residents increases, so does the amount of mortgage lending. Conversely, a higher proportion of African American residents correlates with fewer mortgage loan originations.”

In some areas of the City of St. Louis, there are many census tracts in which the population is 75-98% African American, which the NCRC study calls concentrated clusters of segregated neighborhoods.

“Within these areas less than 1% of homes received a home purchase loan for the 2012-2014 period,” the NCRC study shows. “This lack of lending is not fully explained by differences of income, meaning that credit is flowing more to neighborhoods with higher percentages of white residents with the same income profile.”

The map below, from the NCRC study, shows the disparity of mortgage loans that go to predominately white neighborhoods, which are shaded gray, compared to the minority areas, which are various shades of green. The darker the shade of green, the higher the minority population is in that neighborhood.

The purple dots, in various sizes, represent the volume of mortgage loans that went to a particular area. 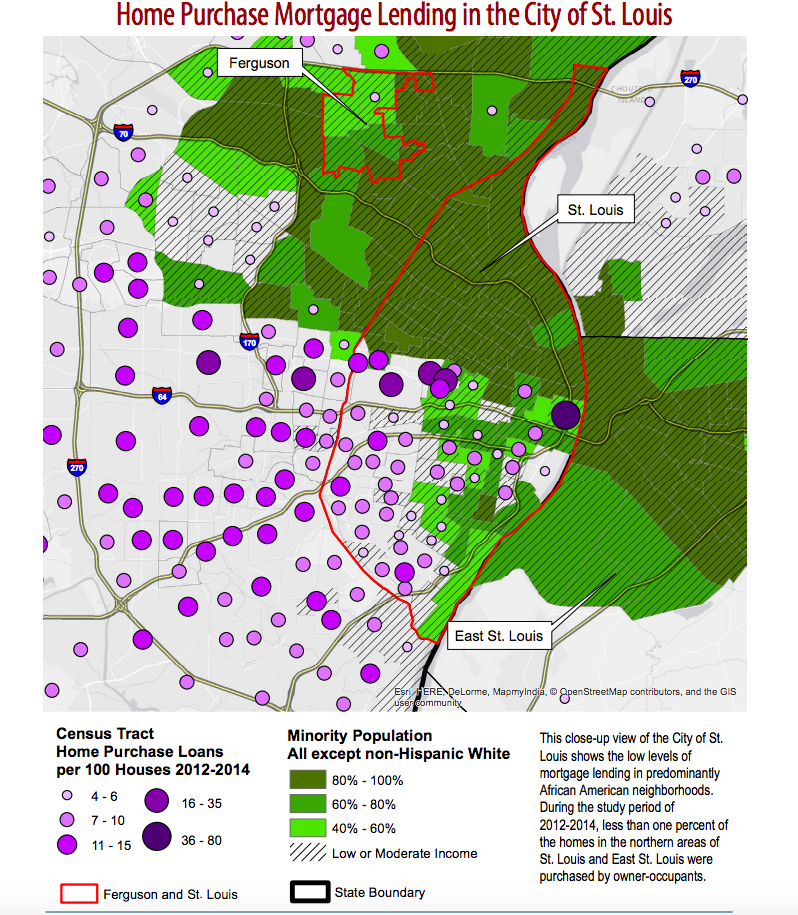 “This report simply puts numbers to what we see every day,” said Elisabeth Risch, co-chair of the St. Louis Equal Housing and Community Reinvestment Alliance. “Majority African American neighborhoods don't have the same access to credit that white neighborhoods enjoy. We still have a lot of work to do before we close the book on St. Louis' ugly history of redlining.”

According to the study, Milwaukee is the third most segregated major U.S. city, behind only Detroit, Michigan, and Gary, Indiana.

And according to the study, NCRC found an “extensive mortgage lending imbalance” in Milwaukee, with mortgage credit distribution “skewed heavily” toward majority white neighborhoods.

“While median family income is a critical factor, lending is concentrated in majority white neighborhoods and scarce in majority African American neighborhoods,” the NCRC study states. “Within the City of Milwaukee, the race of the neighborhood is a significant variable associated with the amount of mortgage loan activity.”

According to the study, loans in the Milwaukee MSA are “heavily concentrated” in majority white and middle- and upper-income neighborhoods.

A map of mortgage lending in Milwaukee, shown below, also shows the differences in loans originated in white neighborhoods compared to minority neighborhoods. 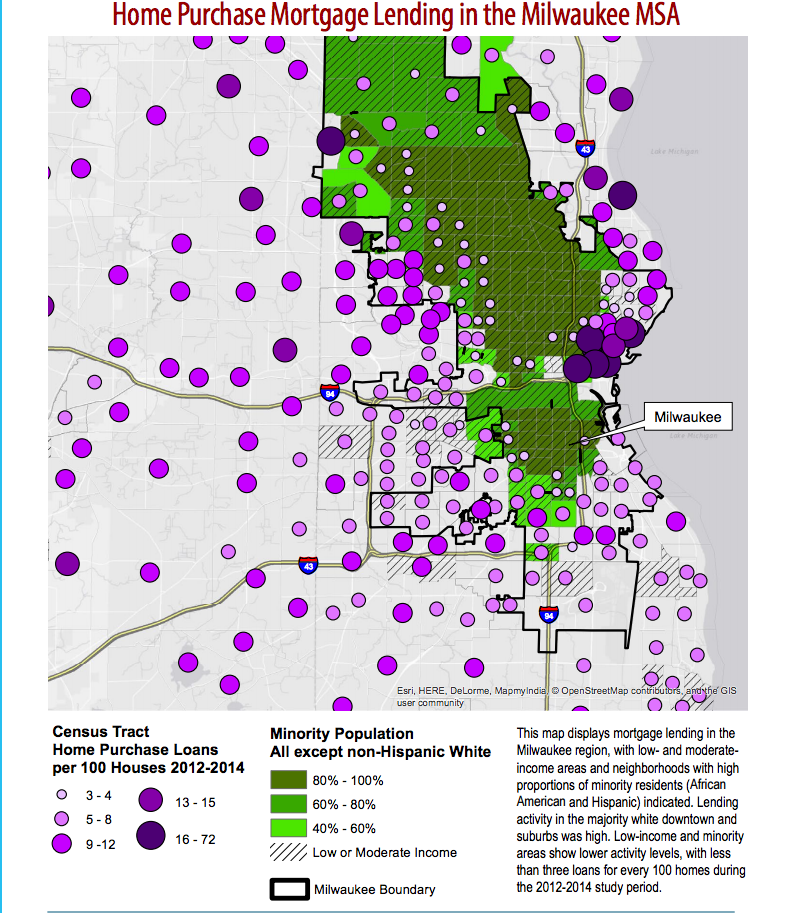 “The future of the Milwaukee region, where one-third of the residents are people of color, is tied very closely to ensuring opportunities for communities of color,” said Bethany Sanchez, director of fair lending at the Metropolitan Milwaukee Fair Housing Council.

“Lenders and policymakers must take action to ensure that every credit-worthy borrower has equal access to fairly priced credit,” Sanchez continued. “Without that access, predators and scammers fill the gap, targeting their fraudulent and discriminatory lending practices on credit-worthy borrowers.”

In each city, the NCRC is calling for “stronger enforcement and expansion of the Community Reinvestment Act and the preservation and strengthening of the affordable housing goals in the secondary mortgage market.”