Come November, some percentage of the U.S. population will choose the next president of this country. Who wins the election is still a big mystery and what happens after that is an even larger mystery.

Regardless of who wins, whether its presumptive Republican nominee Donald Trump, former Secretary of State Hillary Clinton, or Sen. Bernie Sanders, I-VT, the next president will have an impact on housing.

But just what kind of impact?

If the American people choose President Trump or President Sanders, the impact on housing would be decidedly negative, according to survey results released Wednesday by Zillow.

In an effort to determine the potential impact of each of the presidential challengers, Zillow surveyed more than 100 housing experts about their expectations for the housing market, and specifically about how each presidential candidate would impact the housing economy.

The experts were asked for their view on the impact each candidate would have on home values, housing finance reform, and the overall economy.

Both Sanders and Trump do not fare well in the experts’ eyes.

According to Zillow’s survey, the housing experts said that Trump and Sanders would both have a negative impact on home values, housing finance reform and the overall economy if elected.

Clinton, on the other hand, fared better in the eyes of surveyed experts.

Zillow’s survey results showed that the experts see a positive impact on home values and housing finance reform during a Hillary Clinton administration and a neutral impact on the overall economy.

The results of the Zillow report are based on a survey of 107 experts conducted between April 25 and May 5, 2016.

Given the timeframe of the survey, the respondents were also asked about the impact of Ohio Gov. John Kasich and Sen. Ted Cruz, R-TX.

Interestingly, Kasich fared the best of all the candidates in the eyes of the housing experts.

According to Zillow, the survey respondents predicted home price appreciation would end 2016 up 4% year-over-year, up from expectations of 3.7% in the previous Home Price Expectations Survey.

But, if Sanders or Trump is elected, the economists would lower their expectations for home values and the overall performance of the U.S. economy.

“Many of the candidates’ proposals sound appealing to voters, but a closer look through the panelists’ economic lens reveals the potential impact on our economy,” Gudell said.

“The results from this survey show us that from these economists’ standpoint, the more centrist candidates from either party would be best for the economy and housing market,” Gudell continued. “Respondents saw the more polarizing political leanings of Donald Trump and Sen. Sanders as having a negative effect.”

Click on the image below to see the views of the housing experts of the candidates. 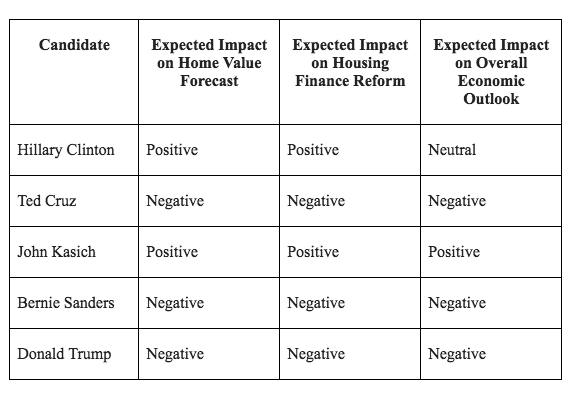 The survey respondents were also asked for their views on the housing economy outside of the election.

According to Zillow, half of the respondents credit the recent acceleration in home value growth primarily to low inventory, rather than low mortgage interest rates or wage and job growth, among other factors.

Additionally, nearly two-thirds of the researchers did not think that recent monetary policy decisions to keep interest rates low are causing an unsustainable increase in home values.

The fact that the housing experts think Clinton would be good for housing isn’t surprising when considering the recent Bloomberg report that Wall Street is apparently betting on a Democrat to win for the first time since 2008.

According to the Bloomberg report:

Clinton gathered almost 70 cents of every $1 spent in the presidential race by employees of the six biggest U.S. banks in the first quarter, according to data compiled by Bloomberg Government based on Federal Election Commission reports.

It's a sharp turnabout for the bankers, who favored Republican Mitt Romney in the last presidential race, and who sent the biggest share of their early money during this election cycle to Jeb Bush and his allies. Not since President Barack Obama's first presidential run in 2008 has Wall Street favored a Democrat, the data show.

So Wall Street is betting on a Democrat and the experts polled by Zillow think the Democratic frontrunner would a be a better president for housing than her other two current combatants, but will voters agree?

The experts agreed that the next president will undoubtedly have an impact on housing. Now, it’s only a matter of time before we know just what kind of impact that will be.