Whether it’s real or imagined, there’s at least the perception that some people in the U.S. would actually leave this country if Donald Trump wins the election later this year and becomes president.

And if this supposed wave of Americans does indeed flee Trump’s America, one Texas Realtor is ready and willing to help local residents sell their homes.

According to an article this week from the Guardian, a recent poll showed that approximately 20% of Americans would actually consider moving out of the country to avoid President Trump.

That article in the Guardian also reveals a new “matchmaking service” that’s designed to help the supposedly fleeing Americans find a Canadian partner that they can share their life with once they take up residence in the Great White North.

Maple Match is a matchmaking service like none other. In the words of its website, it “makes it easy for Americans to find the ideal Canadian partner to save them from the unfathomable horror of a Trump presidency”. The app, in other words, wants to help Trump-averse singles find love – and perhaps a new country to call home.

While Maple Match may claim to help single Americans find love in Canada, what becomes of their home if they move to Canada?

Well, West Texas Realtor Michelle Blackwell is ready to help, and she’s going viral because of it.

According to multiple reports, including Dallas’ WFAA and Click2Houston, Blackwell posted a message on her professional Facebook page this week appealing to anti-Trump homeowners in and around Odessa, Texas.

“Leaving the country if Trump is elected president?,” Blackwell’s ad asked. “Give me a call and let’s get your home sold!!”

The post is now deleted, but that’s not before Blackwell’s post was shared more than 43,000 times and pulled in over 1,500 comments, according to the Click2Houston report.

The post, which HousingWire captured in a screenshot from a cached version of Blackwell’s Facebook page, also featured a caption that read “Call me today and I will take care of you!!” 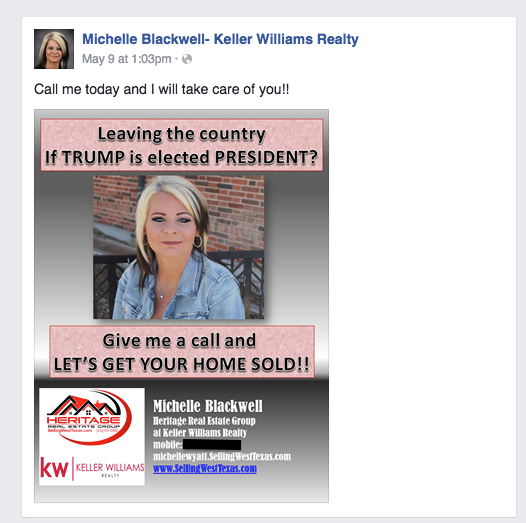 Click2Houston captured some of the reaction to Blackwell’s post, including:

"This is the best marketing ever," Douglas Scyphers wrote.

"From one Realtor to another…that is awesome! Hilarious," Brian Russell wrote.

"Let's see how many people are going to actually follow through," Kynn Tribble said.

"You ma'am, have one the Internet," Steve Saunier wrote.

Considering how many times her ad was shared, Blackwell probably achieved her goal of getting her name out there, and more.

Whether it leads to actual business for her or not depends on how November goes and if there are actually people that would leave the U.S. rather than live through a Trump presidency.

Only time will tell on all counts.