Women and minorities who identify as the head of their household still aren’t borrowing to buy homes at the same rate as men and whites, respectively, even when they make the same income, according to a recent study from real estate firm Trulia.

Because of this, minorities and women are locked out of one of the biggest tax benefits available annually, the mortgage interest tax deduction.

Back in 2013, while the U.S. Department of the Treasury lost money, the tax deduction saved taxpayers $80 billion, according to the Trulia report.

The mortgage interest deduction benefits higher-earning taxpayers who can typically afford to purchase homes. Only about 12% of taxpayers with incomes under $50,000 itemize deductions, compared to 94% of those with incomes over $200,000.

While benefiting wealthier households, this deduction can also create more of an inequality between whites and minorities, as well as men and women, Trulia's report contends.

"If differences in which groups can take advantage of the MITD can’t be explained by age and income, then in addition to fueling wealth disparities between rich and poor, the policy is also increasing wealth disparities between racial and ethnic groups among heads of households who are otherwise similar. Nationally, if you are a head of a household and you are any race or ethnicity other than white, you are between 38.8% and 57.8% less likely to be able to take advantage of the MITD than a white head of household of the same age and income," the report states.

According to the study, blacks are still 56.9% less likely to own a home with a mortgage than whites.

Hispanics, who tend to live in the Southwest and Western regions of the U.S., are 50.9% less likely than whites to have a mortgage. 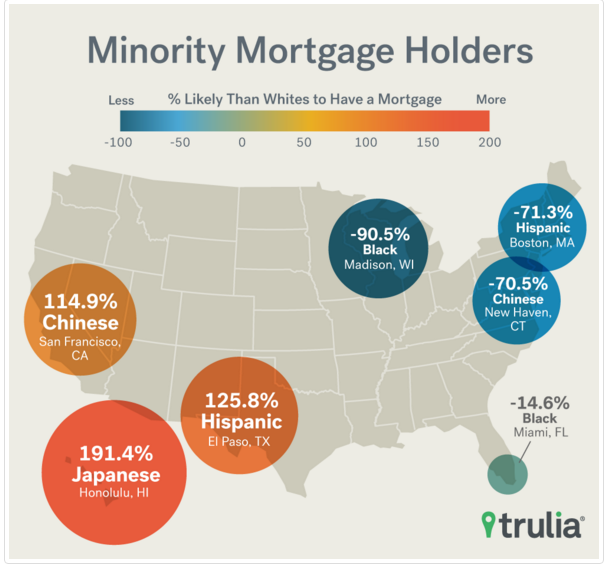 Single women are 6.2% less likely to own a home with a mortgage than a single male, but areas like San Antonio Seattle and Denver are among the many states they prefer to live in.

Felipe Chacón, the Trulia analyst who compiled the study, said that as far as the gender gap goes, much of it is explained by age and income. Women do much better compared with men after controlling for age and income, but still fall short by 10.5%. This is likely because woman who identify as a head of household on Census forms are much more likely to be single than married.

Here’s a rundown of homeownership rates, varying between age and income: 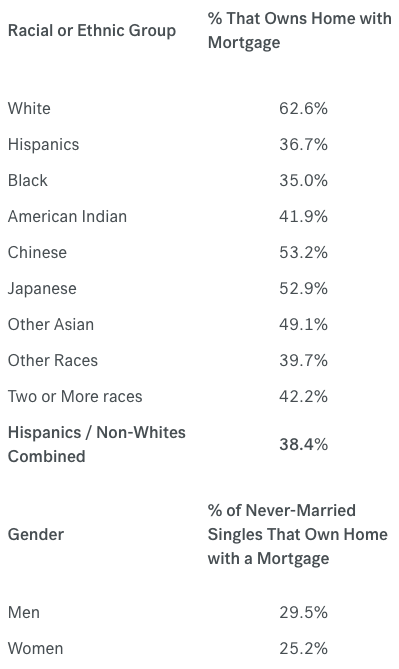