Mortgage rates are officially at their lowest level since February of last year, giving homeowners who have still not refinanced another shot to save money, Freddie Mac’s latest Primary Mortgage Market Survey recorded.

This report echoes recent news from the Mortgage Bankers Association that refinance demand is starting to increase again after dwindling for period.

The number of borrowers who could both likely qualify for and benefit from a refinance now sits at 6.7 million borrowers, a recent Mortgage Monitor Report by Black Knight Financial Service found. And with rates further decreasing, this number is likely to grow.

“Mortgage rates this week registered the delayed impact of last week’s sharp drop in Treasury yields as the 30-year mortgage rate fell 12 basis points to 3.59%. This rate marks a new low for 2016 and matches last year’s low in February 2015. Low mortgage rates and a positive employment outlook should support a strong housing market in the second quarter of 2016,” said Sean Becketti, chief economist for Freddie Mac.

As a result, Becketti noted in last week's survey that her speech triggered a rally in Treasury markets and drove the 10-year yield down. But the comments came too late to affect last week’s mortgage rate survey.

He added that if the Fed’s cautious tone persists, mortgage rates may register the impact in subsequent weeks.

This chart shows rates over the past year. 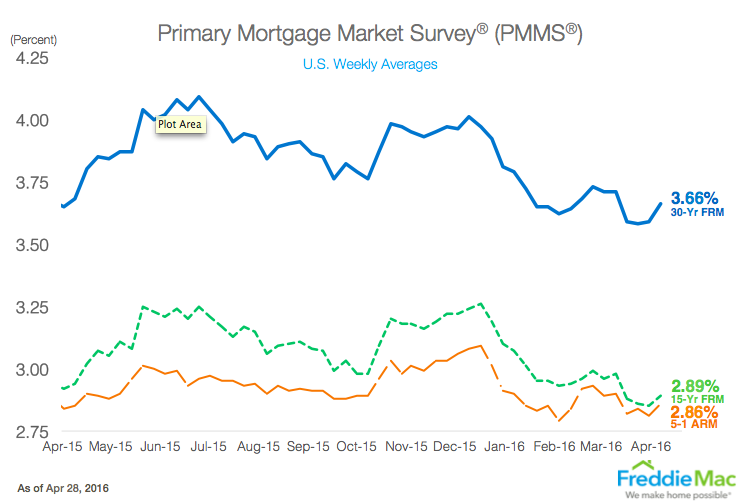 The 5-year Treasury-indexed hybrid adjustable-rate mortgage averaged 2.82% this week, declining from 2.90% last week. A year ago, the 5-year ARM averaged 2.83%.