Conservative underwriting relative to pre-crisis days, coupled with more affordable house prices, has put housing collateral back in a favorable position with investors.

Perhaps the biggest testament to the growing appetite for housing collateral is the arrival of rated distressed collateral.

Rated securitizations backed by re-performing loans (RPLS), which are loans that at some point during their term were at least 90 days delinquent but are back on track following a loan modification, are expected to increase as buyer demand continues.

The transition that occurred in distressed housing in 2015 was the beginning of rated RPL securitizations and with the advent of adding ratings you saw volume go up dramatically, according to Carl Bell, managing partner and co-head of investments at Invictus Capital Partners.

The demand for housing collateral hasn’t just stirred appetite for RPLs; non-performing mortgages — the most distressed mortgage collateral of all — are also finding ready funding.

The challenge for investors is finding access to housing collateral in an environment that provides little supply.

For risk-averse investors, the improvement in housing hasn’t assuaged the looming legacy issues. “These are buyers that remain very cautious about housing-related exposure and concerns are rooted in the past when ratings did not appropriately reflect risk and standards became loose,” said Bell. “These investors are taking a wait-and-see approach.”

But a second group of investors believes that housing is in a favorable position in the distressed cycle, where leverage is lower than before and is just starting to increase. “[These] opportunistic credit investors see housing-related exposure – in other words, residential credit—as a particularly attractive part of the market,” said Bell.

Since 2008, when house prices reached their lowest point, access to housing-related exposure has been limited. Bell estimated that right after the housing market crash there was zero availability or appetite for the asset.

In 2015, bonds backed by residential credit reached $58 billion, around 15% higher than issuance levels supplied in 2014 but still roughly half the level of what was being supplied over 2000 to 2003, just before looser credit underwriting that led to the crisis.

What mortgages are underwritten by the banks usually stay with the banks because the loans are high-quality assets and provide good margins for returns on asset in the current low deposit rate environment.

“Stricter capital requirements for mortgage servicing rights (related to loans that are sold) and an increased bank focus on cross-selling to jumbo borrowers, the result has been that bank bids have outweighed the capital market execution by a margin of 1 to 2 points,” said Bank of America Merrill Lynch analysts in the report. “Whole loan prices at the supply level are too high for RMBS issuance to be profitable.”

BofA ML expects that private label RMBS volumes this year will total $10 billion, similar to the volume placed in 2015.  At this pace it is clear that the positive investor sentiment on housing hasn’t done much to boost the private label RMBS market.

This demand for housing collateral combined with the lack of assets to match that appetite has contributed to an ideal environment for selling bonds that are backed by NPL and RPL assets.

NPL sale volume from the GSEs reached approximately $6 billion in 2015 and sales in 2016 are expected to increase to at least $10 billion this year, according to BofAML.

The Department of Housing and Urban Development (HUD) has historically been the major supplier of NPLs, selling massive chunks under its “Single Family Loan Sale Initiative” started in 2010.

HUD has sold these loans to investors via periodic auctions. But sales have dropped significantly in 2015. According to BofAML, 2015, HUD has carried out a single NPL sale of $1.4 billion unpaid principal balance, down from $9.5 billion in 2014 and $4.9 billion in 2013.

BofAML attributes the lower sales to a change in HUD’s loan auction post-sale requirements in April 2015. Among other restrictions, HUD barred foreclosure sales for one year after sale (instead of six months as before) and added a requirement wherein buyers needed to report on borrower outcomes even after a note has been re-sold. 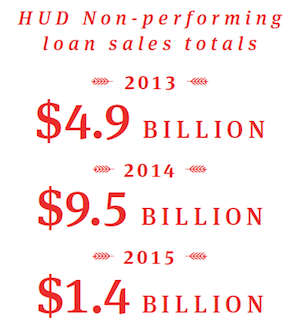 “We think the effect of this change in the requirements will continue to repress the NPL sale volumes from HUD and expect 2016 NPL supply from HUD to be $2 billion to $3 billion,” the report states.

The GSEs on the other hand are expected to ramp up sales of NPLs. Both Freddie Mac and Fannie Mae are expected to sell $12 billion of NPLs over 2016, according to BofAML. Sale volumes had reached approximately $6 billion as of October 2015, when BofAML released its 2016 forecast; with roughly 45% coming from Fannie Mae and 55% coming from Freddie.

Selling NPLs into the debt capital markets achieves two goals for the GSEs: It fulfills their scorecard requirement to reduce the NPLs on their balance sheet and NPL sales also help GSEs reduce less liquid assets in their retained portfolio. Nomura analysts estimates that the total NPL loan pool is roughly $180 billion, which includes $75 billion of GSE-owned paper, $90 billion of  commercial bank and $15 billion of HUD credits.

The latest GSE NPL sale was completed last year. On Dec 9, Freddie Mac said it sold 5,311 non-performing loans from its portfolio in the form of five separate pools.

The loans, which were sold for a total of $1.1billion to multiple winning bidders, have been delinquent for an average of three years, and may have been in various stages of loss mitigation. Mortgages that were previously modified and subsequently became delinquent make up approximately 32% of the pool balance. The average pool loan balance ranged from $180k to $222k, and the average CLTV of the pools ranged from 72 to 134.

But PLs tend to be short duration in nature and deleverage over one to three year periods. Funding is typically achieved through a short-term facility, on an unrated basis.

“Sometimes these transactions are not large enough to accept the costs associated with a securitization,” said Ron D’Vari, chief executiveoOfficer at New Oak Capital. The deals are mostly executed unrated and on a repo funding basis that can price 100 to 200 basis points cheaper than securitization.

RPLs, on the other hand, are better suited for securitization funding. That is because the loan terms are longer in nature and delever at a slower pace.

Credit rating agencies today are also much more conservative than they were pre-financial crisis when they assumed that home prices would not decline and failed to stress ratings with that in mind. Today, said Bell,  ratings are based on stress scenarios experienced during the housing crisis, with prices potentially dropping 30%, 35%   or even more in some cases.

“RPLs , unlike NPLs, are done in securitizations that have longer terms where ratings become more important in terms of opening up the investor base that can participate,” Bell said.

Global pension funds have invested $7 billion in “alternative” assets, including mortgages, infrastructure debt and non-performing loans. And according to consultant Towers Watson, buy-side institutions currently invest only 1% of client money in so-called “illiquid debt.” Going forward, however, this number is expected to increase to between 5% and 10%, according to a Standard & Poor’s report.

Investors that like the assets can also count on strong supply. RPL securitizations grew to $7 billion in 2015, up from $5 billion in 2014; bond issuance in 2016 is expected to grow to $9 billion, according to BofAML.  Nomura analysts estimate that the pool of RPL credits is nearly twice the NPL total at $300 billion. This consists of $225 billion tied to the GSEs and $65 billion among commercial banks.

In 2015, Cerberus Capital Management issued a total of six RPL securitizations via its Towd Point Mortgage Trust, all rated by Fitch Ratings. The senior bonds were rated  “AAA”  with credit enhancement hovering at 50% for most of the deals. That makes Cerberus the most prolific issuer of rated RPLs.  The sponsor began investing in residential mortgages in 2008 and began acquiring reperforming loans in December 2013.

Citigroup, the next biggest issuer of rated RPL transactions, issued three deals in 2015 from its Citigroup Mortgage Loan Trust.

CarVal Investor, a newcomer to the space, sought ratings on two securitizations backed by RPLs in 2015.  The senior bonds issued via Mill City Mortgage Loan Trust 2015-1 and 2015-2 were rated “AAA” by DBRS and Fitch. CarVal is an independent subsidiary of Cargill, and has two main business units —Credit Funds and Real Estate Funds. The firm is headquartered in Minneapolis, with five additional offices in London, New York, Paris, Luxembourg and Singapore. As of October 2015, its assets under management totaled approximately $10 billion.

“It goes without saying that when you bring in rating you are really broadening the demand,” said Bell, adding that a senior bond on rated transactions will trade almost 100 basis points tighter in spreads than the equivalent done on an unrated basis.

Bell believes that the market has substantial demand for rated RPL s and expects to see approximately $1 billion per month of new issuance.

The growing demand for distressed RMBS may show a pent-up demand for non-QM assets, which have only appeared in nominal amounts in prime RMBS pools issued post financial crisis. Non-QM loans do not comply with the Qualified Mortgage rule. The downside to providing these loans is the lack of liability protection.

By definition RPLs are underwritten to borrowers who at some point in the term of the mortgage became more than 60 days past due. Anybody that is more than 60 days delinquent and where the loan required a modification is going to have a low credit score and will be considered distressed.

The other factor is that because RPLs were issued when the housing market was much higher (2005 to 2008) and home prices today remain well below the level; the loans are modified with relatively high loan to value ratios. Cerberus’ Towd Point Mortgage Trust 2015-6 for example is backed by a pool of mortgages with a current LTV of 96.8%; approximately 38.2% of the loans have LTVs greater than 100%,

“That means that the securitization market is already open, on a rated basis, for collateral pools with high LTVs and borrowers that have been financially stressed at some point during the last couple of years,” said Bell.

“Non-QM securitizations will arguably include stronger collateral with lower LTVs, borrowers underwritten to the stricter criteria of today, full documentation and fully compliant to the Ability to Repay rules relative to any of these RPL deals,” he said.