If you’re a follower of the Appraisal Institute on Twitter, some strange tweets began showing up on your timeline over the last 18 hours or so.

Instead of tweets about the appraisal industry, tweets emanating from the Appraisal Institute’s account for the last 18 hours or so have more to do with Playboy Magazine, Hooters, David Hasselhoff, links to “sexy” videos, and other inappropriate tweets.

That’s because the Appraisal Institute has fallen victim to a Twitter hacking, the trade group confirms to HousingWire.

Included among the tweets from @AI_sucks_big were retweets from Playboy Magazine, links to videos with the title “18-Year-Old: ‘If Your Boyfriend Hits You, It’s A Sign Of Love’ – Dr. Phil”, and other videos. 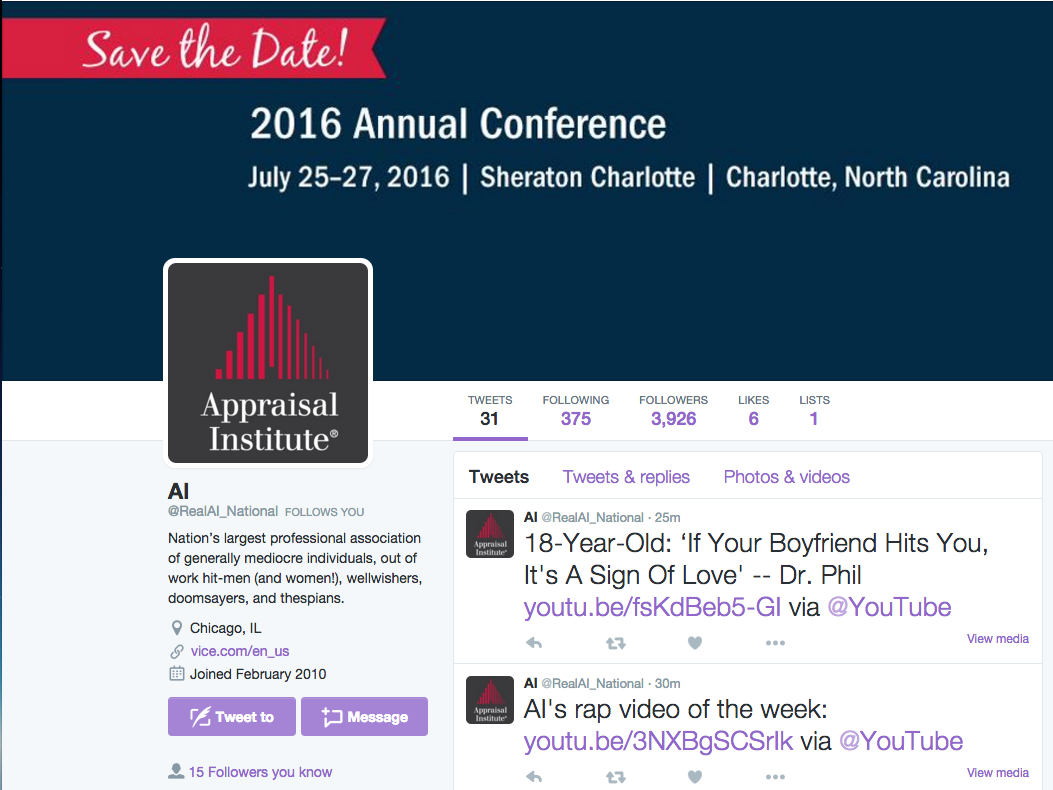 Also included in the tweets was a string of Tweets that appeared to be directed at Appraisal Institute employees. HousingWire captured the tweets in screenshots, which appear below. (click any image to view it in full size) 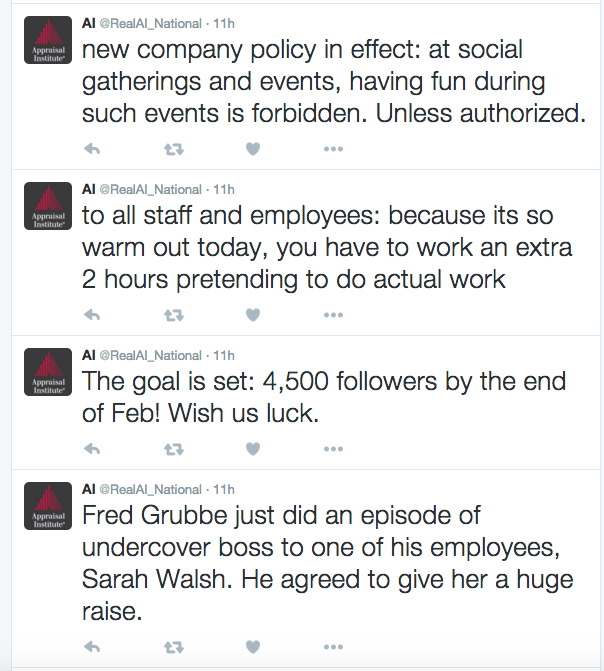 Among other tweets, the hacked Appraisal Institute account tweeted out “to all staff and employees: because its so warm out today, you have to work an extra 2 hours pretending to do actual work” and “new company policy in effect: at social gatherings and events, having fun during such events is forbidden. Unless authorized.”

Over the course of Friday morning, it appears that the Appraisal Institute was in a fight to regain control of its Twitter account, which at one point changed from the handle @AI_sucks_big to @RealAI_National.

When reached about the hack Friday morning, Brent Roberts, the Appraisal Institute’s senior manager of communications, confirmed that the AI Twitter account had been “compromised,” but had since been restored; temporarily using the handle @RealAI_National.

As of 11:05 a.m. Eastern, the @RealAI_National account was in the process of being taken back over by the Appraisal Institute, but the description that was placed on the account while it was out of AI control was still on the account.

It read: “Nation’s largest professional association of generally mediocre individuals, out of work hit-men (and women!), wellwishers, doomsayers and thespians.

The account’s description has since been changed back to its original wording: “The Appraisal Institute is a global professional association of real estate appraisers, with nearly 20,000 professionals in almost 60 countries.”

The tweets that appear on the newly formed @AI_National are decidedly more salacious than what appeared on the @AI_sucks_big account. 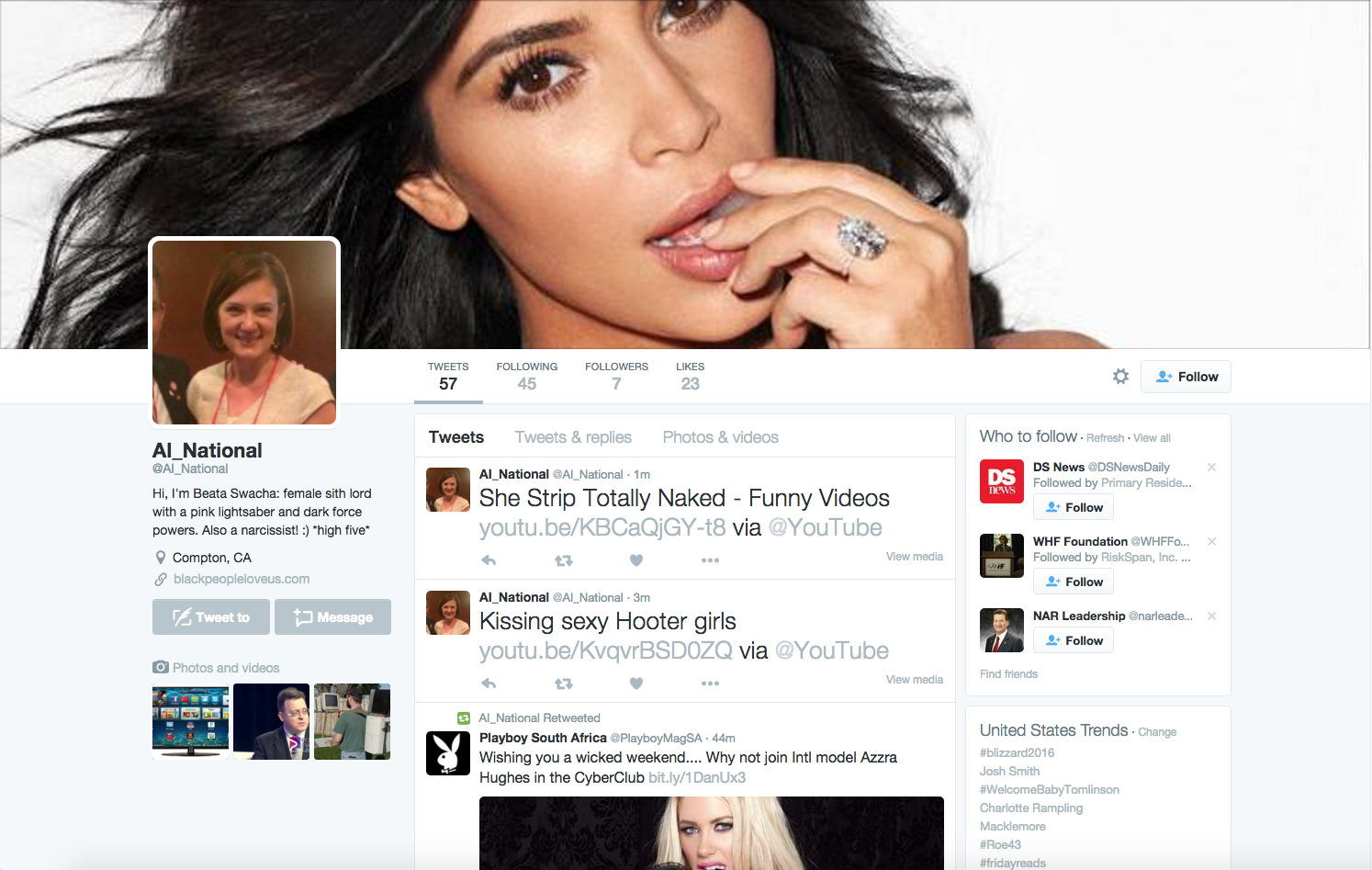 One tweet posted to the @AI_National account on Friday morning read: “Happy Friday AI! Casual day has been canceled. Please no slutwear or dressing like hoochies at work!”

The account also tweeted “Seems like the HR director is quite hung over, again. She should change jobs from AI to AA #Work”

On Thursday evening, the account tweeted that all AI employees are now allowed to work from home, adding “Make sure you’re logged in and you love this tweet!”

And the AI’s chief executive officer, Frederick Grubbe, was not spared either. Grubbe was the subject of a tweet posted by @AI_National, which read: “Every place should have its ‘Dear Leader’, and my workplace is no different. Here’s that ravishing man!” 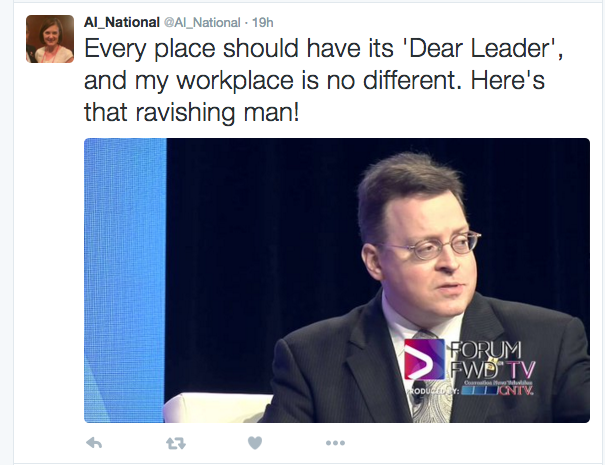 As of 12:50 p.m. Eastern Friday, many of the provocative and disingenuous tweets had been removed from the @RealAI_National account, but retweets that mention both Hooters and Playboy still existed on the timeline. 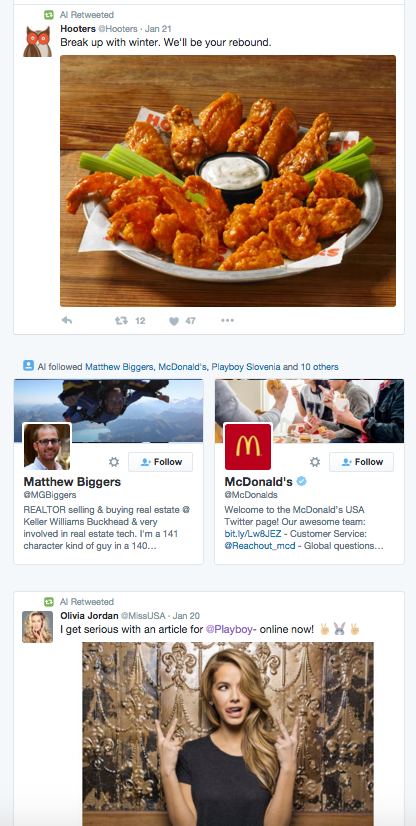 HousingWire asked the Appraisal Institute Friday morning if it knew who was behind the hack, but had not yet received a response.

Both the @RealAI_National and @AI_National accounts have since gone quiet after both prolifically tweeting Thursday night into Friday morning.

It appears that the Appraisal Institute Twitter hacking of 2016 is now over, but we’ll always have the screenshots.