Since we’re only a few weeks into the new year, there’s still plenty of time to identify which housing markets are set to blow up this year.

Zillow set out to do just that, using its Home Value Forecast, which forecasts the change in the Zillow Home Value Index over the next 12 months, recent income growth, and current unemployment rate to pinpoint which markets will be the hottest in 2016.

While last year’s list was heavy on “trendy tech centers,” Zillow’s hottest housing markets for 2016 is more diverse and spans the country, from coast to coast, although the vast majority of 2016’s hottest markets are west of Texas.

Topping Zillow’s list of the hottest housing markets for 2016 is Denver, where home values rose 16% in 2015, and Zillow said that it is forecasting them to rise another 5% in 2016.

“Trendy tech centers like San Francisco, Seattle and Denver hogged the spotlight in 2015. But this year, the markets that shine brightest will be those that manage to strike a good balance between strong income growth, low unemployment and solid home value appreciation,” Zillow Chief Economist Svenja Gudell said.

“As the job market continues to hum and opportunity becomes more widespread, the best housing markets are no longer limited to the coasts or one-industry tech towns,” Gudell continued. “This year’s hottest markets have something for everyone, whether they’re looking for somewhere to raise a family or start their career.”

Zillow noted 2016’s list is not absent of tech centers, especially considering that Denver is a major tech center itself.

The other two cities in the top three are also tech centers – Seattle and Dallas-Ft. Worth. Zillow noted that each of the top three cities are “ideal” for job growth.

Coming in fourth on Zillow’s list is Richmond, Virginia, where a strong and diverse economy is the driving force behind the city’s high income growth, with government, finance, education, and manufacturing jobs robust in the area and expected to continue to in 2016, Zillow said.

And here’s Zillow’s full list of the hottest housing markets in 2016.

And here is Zillow’s methodology: 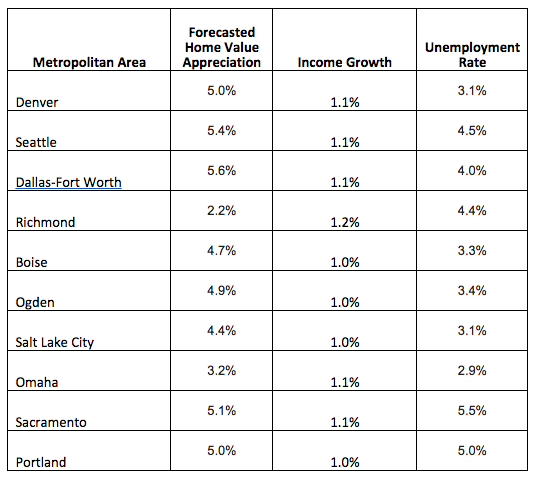