As the real estate marketplace has begun to turn around, one result is that the strategies that worked so well for Wall Street during the past few years are now likely to evolve. Instead of purchasing homes by the thousands to hold and lease — the single-family rental business (SFR) — the emerging opportunity centers on financing for small real estate investors.

Data from RealtyTrac shows there are more than 16 million homes with absentee owners. While some of these properties are second homes and vacation properties, huge numbers are simply single-family rentals with one to four units.

By and large, the owners of single-family rental units have done well during the past few years. The National Association of Realtors reports that existing home values reached $219,400 in April, an 8.9% increase from a year earlier.

While not all areas have seen price increases, the general trend is clear: Among 174 major metro areas, NAR reports that 148 saw price increases during the first quarter when compared with a year earlier.

And if we take a longer-term view and look back three years to when the U.S. housing market bottomed out, it’s apparent that the rise in home prices has been widespread. A quick analysis of 202 metropolitan statistical areas with a population of 200,000 or more shows the average change in median home prices between April 2012 and April 2015 was a 16% increase, according to RealtyTrac data.

Among those who have reaped major profits from rising real estate values are surely the big players in the SFR space. At the end of 2014, RealtyTrac calculated that properties purchased by Blackstone/Invitation Homes during the prior three years had increased in value by more than $500 million. (See chart on page 83).

Rising home values prove the essential soundness of the SFR movement and also raise a question: Can anyone reasonably expect home values to rise 8.9% year in and year out? On average over the last 14 years going back to January 2001 (172 months to be exact), the average annual home-price appreciation in the U.S. median home sales price was 2.24% .

As the SFR space matures, where is the next big opportunity?

A deeper look at the absentee-owner market shows that as a result of home price increases, equity is growing. Also, among all-cash investors, equity growth means they may now be able to extract some or all of their original investment through refinancing, a choice that allows them to shrewdly parlay that equity into more investment properties while avoiding the taxes and marketing costs associated with a sale.

But tighter regulation and higher risk aversion — both to actual risk and to headline risk — in the world of mainstream lending mean that despite the opportunity available with buy-to-rent investors, traditional lenders have by and large not jumped on this opportunity.

That leaves these nontraditional national lenders a bigger share of the pie in a market that in the past has been largely the domain of local and regional hard-money lenders.

Thanks to their ability to scale, innovation and hands-on experience in the single-family rental market over the past few years, these nontraditional lenders evolving from the roots of the big buy-to-rent operators are able to offer better products at competitive rates tailored specifically to SFR investors.

That competition is already forcing local hard-money lenders like The Norris Group in Southern California to lower their rates also, according to founder Bruce Norris.

“We have refi rates at 6.9% for rentals, and that’s hard money,” he told RealtyTrac recently, explaining that five to 10 years ago the rate would have been closer to 12.5%, and just three years ago his group was giving hard money investor loans at 9.9%.

“There’s all kinds of hybrids … as everyone tries to chase the same borrower. And that borrower, the investor, is in the catbird’s seat, and that borrower has more options than the owner-occupant really.”

Potential loan opportunities for the absentee-owner market are substantial. RealtyTrac address data shows that more than 10 million absentee single-family homes — more than 50% of all absentee-owner homes — are owned free and clear while another 3.7 million have more than 20% equity.

Some of the major SFR operators in the past year have recognized the massive opportunity in lending to these existing landlords with equity and have created companies designed to do just that.

Savvy Wall Street minds seized the unique opportunity coming out of the recession and foreclosure crisis to buy distressed properties at below-market prices and rent them to the burgeoning renter population. That population swelled by more than 7 million between 2007 and 2014 from homeowners who lost their homes to foreclosure and is continuing to balloon as Millennials hold back on homeownership.

Now those investors  are now moving on to the next opportunity for at least two good reasons.

The first reason is that the rates of return these operators need to feed their business model are no longer available at the scale and density levels they have been over the past couple of years. Consequently, these operators are staying disciplined, sticking to the original plan and not acquiring single-family rentals in the volumes they have in the past when the numbers don’t make sense.

However, solid returns are still available for individual investors who are happy buying one or two properties in a year rather than thousands of properties a year.

There is plenty of opportunity to go around in the buy-to-rent arena. These companies have become highly efficient in property acquisition, but even with all those efficiencies they collectively have purchased about 647,000 single-family homes over the past four years, according to RealtyTrac data.

That’s still a small drop in the bucket of 6% of the total 10.2 million single-family homes purchased during that time period.

Even if we just include single-family homes purchased by non-owner-occupants, the 647,000 still represents just 9% of the 7.4 million purchased during this time period.

These operators have now identified two strategies to capitalize on a housing market shifting away from homeownership and toward a higher percentage of renters.

The first is to acquire single-family rentals that offer a good return in the form of rental cash flow (with any appreciation icing on the cake); and the second is now to fund other investors employing the first strategy with returns coming in the form of interest paid on that financing.

An added benefit of this second strategy is that the SFR lender does not face the same challenge associated with nonpayment. A traditional or hard-money lender has to dispose of the asset in that scenario whereas the SFR lender simply moves the asset into their existing rental portfolio.

The second good reason SFR operators are shifting toward lending rather than renting is simply public relations. Investment ownership — as opposed to real estate financing — is very visible and subject to criticism.

“Blackstone’s deep pockets — $248 billion in assets under management and a $3.6 billion credit line arranged by Deutsche Bank for buying houses — allow it to outbid individual buyers, driving up local real estate prices and pushing families out of the market,” wrote Mother Jones in April.

The magazine added that “buying houses cheap and then waiting for them to appreciate isn’t the only way Blackstone is making money on these deals. It wants your rent check, too.”

While the SFR operators could mount some good arguments against that logic (i.e., isn’t it good for local communities when real estate values rise? Don’t higher property values mean higher property taxes and therefore more public services?), why fight that PR battle when another, arguably better option is on the table for capitalizing from the housing market’s seismic shift toward renting?

The only real obstacle remaining for this shift on the part of SFR operators is raising capital. But let’s face it, that’s not really an obstacle for these folks. 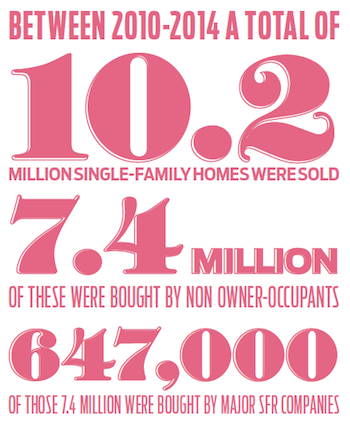 There are several ways for BTR firms to raise capital.

First, sell off some number of properties now in inventory. Given massive profits to date this option could be highly attractive, however in some neighborhoods sell-offs would have to be done over time to avoid flooding the market and pushing down values.

As an example of how a securitization might work, in January Bloomberg Business reported that “Blackstone’s Invitation Homes is planning a $513.8 million deal backed by 3,072 properties.”

Given that Invitation owns 45,000 properties, we can extrapolate and say that if the entire inventory was used to secure bonds the company at that time might have be able to raise something on the order of $7.38 billion, a figure which today is likely higher given that home values in most metro areas have continued to rise.

Bloomberg also said that seven different issuers had previously sold rental-home bonds worth about $6.5 billion, proof that the concept can work. (Read more about SFR securitizations on page 72).

Crucial to each of these options is the reality that the world is awash with capital — and big players on Wall Street have ready access to such funds.

In such an environment, getting a few billion here and there from overseas investors is hardly a problem for Wall Street.

Beyond the capital and PR issues, there’s another reason why loans for small-scale investors are attractive: RESPA, TILA and the newly formulated, 1,888 page, TILA-RESPA Integrated Disclosure rule (TRID). TRID was designed to protect residential mortgage borrowers but generally does not apply to extensions of credit secured by business, commercial or agricultural properties.

Commercial loans are typically considered more risky than residential financing and for that reason, lenders are able to get higher returns. To the extent that commercial mortgages are exempt from various consumer regulations, they may also be cheaper and quicker to originate.

According to estimates from the Consumer Financial Protection Bureau, which created TRID, the cost to implement TRID across the industry will be more than $67 million per year for the next five years. That’s a total price tag of $1.3 billion, and that’s just the financial costs.

Because the TRID rules are new, lenders will have to get legal advice determining what is or is not covered by the latest regulations. Some of the questions may be tricky: For instance, if there’s a four-unit property and one unit is owner-occupied, do residential or commercial lending rules apply?

RealtyTrac data shows millions of specific addresses where absentee owner equity is substantial and little or no current financing exists. This is a natural market for BTR firms looking for new revenue sources as well as fewer regulatory and public relations headaches.

For many Wall Street firms, such data will mean an opportunity to build on SFR experiences and quickly expand into what might be called LCO financing — loans for commercial owners.