Patrick Wanninkhof, 25, died tragically after being hit by a car in Western Oklahoma while he was bicycling across America to raise money for affordable housing, an article in Oklahoma’s Own reported.

The driver of the car admits she was using her cell phone at the time of the collision.

Wanninkhof was hit on Highway 152 south of Elk City on Thursday morning, July 30, according to the Oklahoma Highway Patrol. He died at the scene. 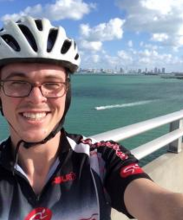 The article said another bicyclist, who was identified as Bridget Anderson, 22, was hurt in the same crash. Troopers said she was stable when she was airlifted to OU Medical Center with a leg injury.

According to the trooper's report, Wanninkhof and Anderson were riding west when a westbound 2014 Chevy driven by Sarah Morris, 34, of Cordell hit them.

She told troopers she was distracted by looking at her phone when she hit the bicyclists, according to the OHP report. Morris wasn't hurt, troopers said.

Wanninkhof was part of the group Bike & Build, which raises awareness of affordability housing.

"As someone with a Dutch father, bicycling is in my blood," he wrote on his Bike & Build profile. "Combining my passion for social justice and pedal powered-vehicles will make for the adventure of a life-time."

According to the organization, “Patrick was an avid cyclist and musician and came to Bike & Build after serving for 3 years with Teach for America in the Bronx.  He had recently completed his Masters in Teaching Adolescent Physics.”

The organization is still gathering information from the relevant authorities and will provide updates as they become available.