Millennials don’t borrow and lend in the same way as their predecessors; it's a fact.

Indeed, Millennials prefer to shell out the dough for organic products rather than repay mortgage debt.

So while spending habits have changed, the credit score system hasn’t, leaving a lot of Millennials without access to credit.

An in-depth feature, just published in the August issue of HousingWire magazine (subscribers only), explains it with the following:

At the moment, the issue is that the Fair Isaac Corp. (FICO) score remains the sole determination of whether or not a potential homeowner should even be considered for a loan in the first place. But the model, originated in 2004, includes data from 1995 to 2000.

“We’ve got an older model that has been incorporated into the [GSEs] automated underwriting engine, but 20 years later we have more granular data available and consumers’ behavior has changed,” said Debra Still, president and chief executive of Pulte Financial Services.

Still then pauses for a moment, and asks, “Is that older model scoring enough consumers and is it scoring them accurately?”

But do they even care about credit in the first place?

ID Analytics conducted a study on Millennial credit scores to find out if they want credit after witnessing their families struggle as a result of the recent recession.

The study found that the challenge for these younger consumers is that while they are actively seeking credit, they are being denied at a much higher rate than other consumers across all industries. 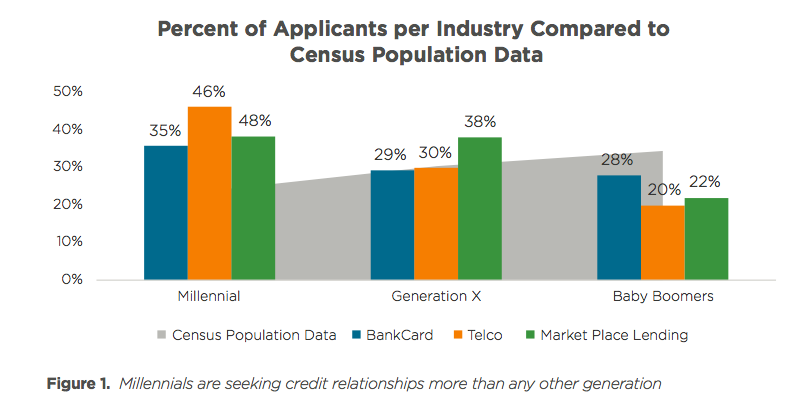 Meanwhile, the activation rate is a lot lower. 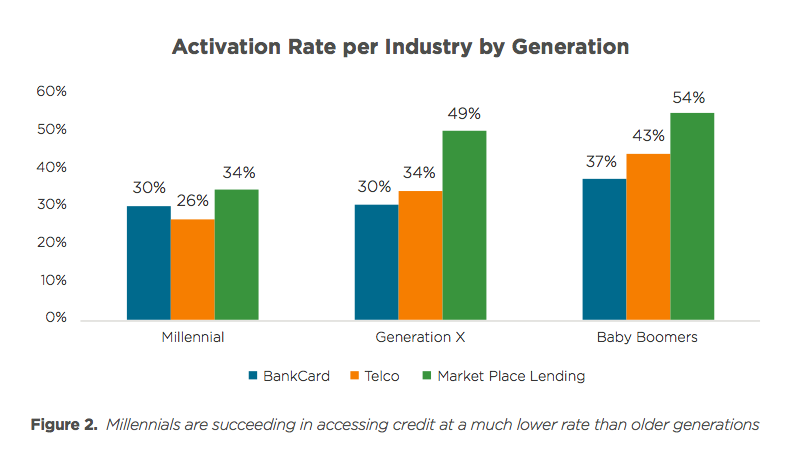 The Consumer Financial Protection Bureau recently published a study that found that 26 million Americans are “credit invisible,” meaning they do not have any credit history with a nationwide consumer reporting agency.

One giant roadblock for millennials was the Credit Card Act of 2009, which prohibited banks from providing those less than 21 years of age with a credit card without a guardian co-signer unless the applicant can provide proof of sufficient income to cover the credit obligation.

The FICO distribution between the generations helps to show this divide. 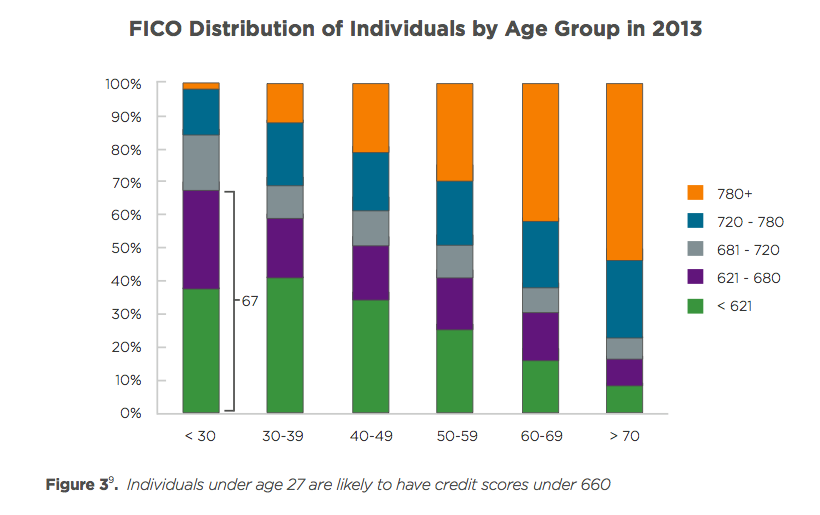 Traditional credit scores include mortgage, credit card, auto loan and other installment loan payment history. With the exception of student loans, a young adult will often not have these credit products.

“The Millennials are disproportionately turned down due to traditional credit score calculation that favor consumers with more established credit behavior,” the report stated. “Using a score that includes alternative data from wireless providers, marketplace, or other online lenders will not only be more predictive, but also more predictive in the very industries millennials are seeking to start their credit relationships.”

Answers for this issue are slowly coming out. Fair Isaac Corp. said it would potentially start using a new credit score metric that includes consumers’ payment history with their cable, cellphone, electric and gas bills, as well as how often they change addresses and other factors.

The newer credit scoring models put less emphasis on the impact of unpaid medical bills, and the effect of missed payments on debts that have subsequently been paid off is eliminated.