It’s been just over five months since the Zillow Group (Z) formed, after Zillow bought Trulia for $2.5 billion in a stock-for-stock transaction.

An acquisition of this scope and size was always going present challenges for the newly unified Zillow Group, but the transition from two brands to one and the hearty competition in the form of Realtor.com have some questioning what the future of Zillow holds.

In a new report, Barclays (B) cites slowing traffic for Zillow, and in particular Trulia, as a cause for concern, and downgrades Zillow for the second time in three months.

And now, Barclays is downgrading Zillow again, this time from Equal Weight to Underweight.

Barclays is also lowering its price target on Zillow from $90 to $70.

According to the Barclays report, Zillow’s slowing traffic growth is the result of “category saturation” and increased competition from Realtor.com.

Barclays pulled traffic data on Zillow, Trulia and Realtor.com from comScore and found that Zillow’s growth is slowing significantly.

The comScore data also showed that Realtor.com’s traffic in June surpassed Trulia’s traffic for the first time in two years.

According to the Barclays report, authored by Christopher Merwin and David Lee, Zillow Group’s traffic growth continues to slow across all of its brands, most notably Trulia.

Per the Barclays report citing the comScore data, the combined traffic growth of Zillow Group’s four consumer brands – Zillow, Trulia, StreetEasy, and HotPads – fell to 16% year-over-year in the second quarter from 33% year-over-year during the same time period last year, marking a new low for growth.

Barclays said that it believes the slowdown in traffic is a “function of audience saturation and new competition.”

According to the report, Zillow Group now pulls in a 57% share of real estate traffic in the U.S. and boasted 140 million unique visitors as of the first quarter of this year.

Merwin and Lee said that they believe those levels indicate that Zillow’s brands are reaching the saturation point.

And now, Zillow has a big competitor with big pockets, nipping at its heels.

Barclays notes that since News Corp (NWS) acquired Move Inc., which operates Realtor.com for the National Association of Realtors, in November, Realtor.com’s traffic has grown steadily.

“We believe News Corp has successfully leveraged its digital media assets like the Wall St. Journal and New York Post to funnel traffic to the site, in addition to investing incrementally in a branded advertising campaign,” Merwin and Lee wrote in the report.

The analysts also said that it believes Realtor.com’s gains have at least partially come at the expense of Trulia, which saw its traffic growth fall to 2% year-over-year in June, down from 44% year-over-year growth in 1Q.

Click the image below for a look at the traffic data for Zillow, Trulia and Realtor.com. 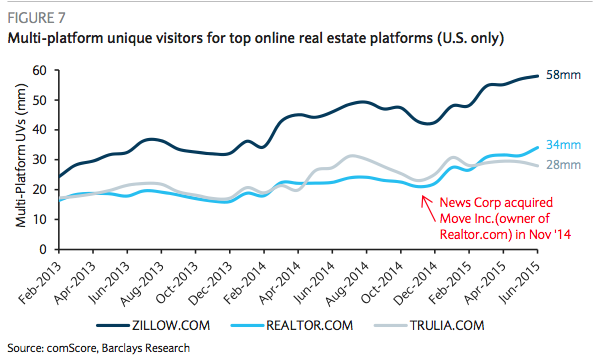 Merwin and Lee said that they think Zillow is allowing the Trulia brand to “fade away,” which will only benefit Realtor.com.

“In February, Zillow closed its $2.5B acquisition of Trulia, with the intent of consolidating audience market share and driving cost synergies, mainly from sales & marketing,” the analysts wrote.

“And now management is seemingly letting the Trulia brand slowly fade away, we think to the benefit of Realtor.com,” the analysts continued.

“Indeed, we believe Realtor.com may be the new Trulia, a large competitor that will relentlessly pursue audience market share, and will at the very least force Zillow to spend more on marketing than their current guidance for $100 million in post-merger cost synergies would suggest,” the analysts said.

The Barclays analysts also write that the Trulia integration has been “more challenging” for Zillow than originally anticipated.

“When we initially downgraded Zillow to Equal Weight in April 2015, it was in large part because of expected integration pains from the merger, and we now think that the impact of the integration may be even more disruptive than we originally thought,” Merwin and Lee write.

The analysts also say that the timing of the departure of Zillow CFO Chad Cohen, who announced earlier this month that he intends to step down, during the middle of what has proven to be a "difficult integration so far,” creates more execution risk for Zillow in the back half of the year and in 2016 as well.

Zillow did not immediately respond to queries from HousingWire, the story will be updated as appropriate, or a responding article will be written.