The results are in, and the national homeownership rate continues on its downward spiral.

For the 10th consecutive year, the homeownership rate in 2014 dropped and is off 0.6 percentage point to 64.5%, according to the 2015 State of the Nation’s Housing report from the Joint Center for Housing Studies of Harvard University.

The decline continued in early 2015 with a first-quarter reading of just 63.7% — the lowest quarterly rate since early 1993.

The 233,000-drop in homeowner households last year brought the total decline since the 2006 peak to 1.7 million.

And the weakness in homeownership extends across all regions of the country and nearly all metropolitan areas, including inner cities, suburbs and non-metro areas.

The report noted that “while recent estimates suggest that homeownership rates may be firming in some areas, there is no evidence so far of a significant rebound.” 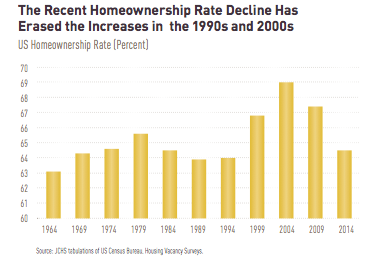 Two factors play a large role in this decline: Generation X and Millennials.

“With the gen-Xers accounting for such a significant share of the first-time and trade-up markets, the drop in their homeownership rates may well be a more critical factor in the ongoing weakness of the owner-occupied segment than the slow transition of the millennial generation (born 1985–2004) into homebuying,” the report stated.

And Millennials are just now beginning to fill in the homeownership gap.

There are more than 86 million Millennials, already exceeding that of the baby boomers at similar ages, and they will increase over the next 20 years as immigration (typically of young adults) continues to pick up.