Homes sold at their fastest pace in nearly two years, with the typical property on the market only 28 days in May, down from 32 in April, according to the latest from Redfin, the online real estate brokerage.

According to the report, in May 35.6% of homes went under contract within two weeks of their debut, just shy of the peak rate of 35.8% exactly two years ago.

Home sales across Redfin markets rose 5.4% in May from April and 3.1% from a year earlier. For the last three years there’s been a double-digit spike in homes sold; this year, an inventory shortage has kept a lid on that growth.

“Even as homes sold more quickly, May showed a significant slowdown in month-over-month price growth, up just 1.6%,” the report from Redfin Chief Economist Nela Richardson says. “That’s relatively low — in each of the past five years, prices rose at least 3% in May. Year over year, the median price was up 6% last month to almost $279,900, a marked drop from the 7.7% increase in April.” 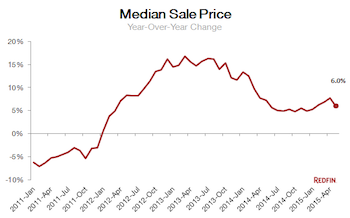 Redfin says that because of steady buyer demand, inventory has barely budged from last year’s low levels. The number of houses, condos and co-ops for sale in March and April grew by less than 1% year over year; they dipped slightly in May.

The composition of buyers — more traditional households and fewer investors — also has kept prices from surging at the double-digit rates seen in 2013.

Other May highlights include:

Homeowners in the Miami, Fort Lauderdale and West Palm Beach, Florida markets can now buy their next home before selling their current one.