Detroit continues to register as a blip on the radar when it comes to America’s housing recovery, which should come as no surprise. The motor city filed for Chapter 9 bankruptcy on July 18, 2013, and while the city does display some improvement, according to experts at Zillow (Z), Detroit’s housing situation is not only stuck, it is deeply troubling.

Leading up to May 7, Zillow posted a series of research pieces diving into what exactly is going on in Detroit to hopefully shed light on the city’s challenges.

What’s interesting is that Detroit never really participated in the hoopla of the financial crisis. “But the lack of frenzy in good times did not protect Detroit from the bad times, with the subsequent national collapse in home values hitting Detroit as hard as any market, if not harder. And since then, while local housing markets around the country have gradually dug themselves out, Detroit has been stuck,” said Aaron Terrazas, senior economist at Zillow.

To put it in perspective, take a look at these two charts. 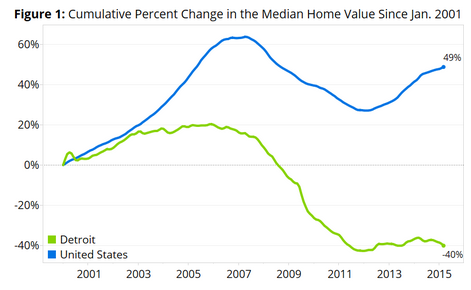 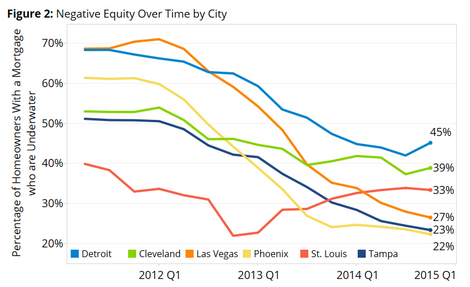 So what happened in Detroit? It wasn’t the most scarred city from the financial crisis, and yet, it has the worst recovery.

Detroit’s home values fell more than 50% from their December 2005 peak, and have only increased about 5% from their trough. As a result, the share of homeowners that are underwater, owing more on their home than it is worth – remains such a huge issue in the city.

The worst part is that the future doesn’t look any better for Detroit’s underwater homeowners.

Terrazas explained that of the traditional ways for homeowner to get clear of negative equity, the only one in which the homeowner does not eventually lose the home or sell without profit is to simply wait for home values to rise.

Except home values are not growing or expected to grow in Detroit.

However, Detroit does have its share of supporters. Dan Gilbert, the founder and chairman of Quicken Loans, has invested millions in the revitalization of Detroit, as chronicled in the March 2014 of HousingWire Magazine.

“In order for the region to thrive, you need to have a thriving city of Detroit,” Quicken Loans CEO Bill Emerson said at the time. “So we just felt like it was something that we wanted to do to be engaged and involved in. Some of our philosophies are that if you really want to affect the outcome you have to do something about it.”

And with one of the top mortgage lenders behind the effort, maybe there is hope for Detroit yet.