The S&P/Case-Shiller U.S. National Home Price Index, which covers all nine U.S. census divisions, posted a slight decline, with a 4.6% annual gain in October 2014 versus 4.8% in September.

On a yearly basis, both the 10-city and 20-city composites saw year-over-year declines in October compared to September.

Las Vegas led the declining annual returns with a decrease of -1.2%. 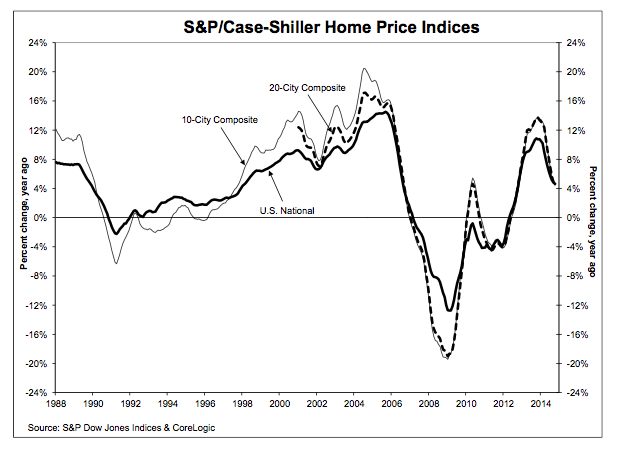 “After a long period when home prices rose, but at a slower pace with each passing month, we are seeing hints that prices could end 2014 on a strong note and accelerate into 2015,” says David Blitzer, managing director and chairman of the index committee at S&P Dow Jones Indices.

Month-over-month, the national and composite indices were both slightly negative in October.

The 10- and 20-city composites both reported a slight downturn of -0.1%, compared to the national index, which posted a -0.2% change for the month.

San Francisco and Tampa led all cities in October with increases of 0.8%.

However, this was offset by Chicago and Cleveland, which posted decreases of -1.0% and -0.7% respectively. 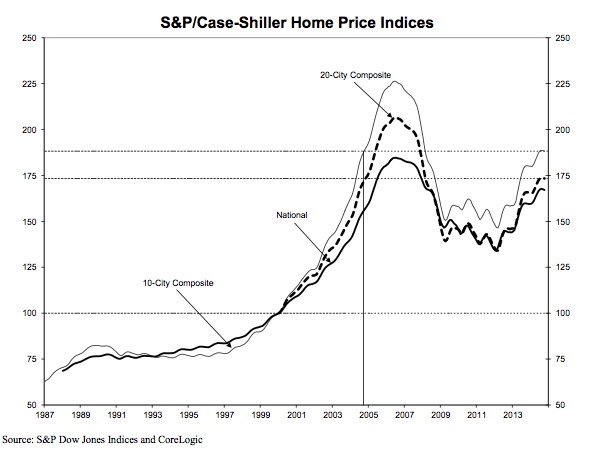 “Home prices in October continued to cool as the leaves changed, nearly flat on a monthly basis. Yearly increases are still slowing at a manageable 4.6% growth, much healthier and more sustainable than the double-digit increases we had seen in years past,” said Quicken Loans Vice President Bill Banfield.