The rent may indeed be “too damn high,” but it’s only going up, according to a new report from online real estate listing service Zillow (Z).

“Over the past 14 years, rents have grown at twice the pace of income due to weak income growth, burgeoning rental demand, and insufficient growth in the supply of rental housing,” said Zillow Chief Economist Stan Humphries.

“This has created real opportunities for rental housing owners and investors, but has also been a bitter pill to swallow for tenants, particularly those on an entry-level salary and those would-be buyers struggling to save for a down payment on a home of their own.”

According to Zillow’s data, renters in the New York-Northern New Jersey metro area alone paid $50 billion in rent, which accounted for more than 10% of the nation’s total.

On the other hand, the smallest amount of cumulative rent was paid by renters in Birmingham, Alabama ($1 billion), Louisville, Kentucky ($1.2 billion) and Buffalo, New York ($1.2 billion), Zillow’s report showed.

Humphries said that increases in rent are only going to continue. “Next year, we expect rents to rise even faster than home values, meaning that another increase in total rent paid similar to that seen this year isn’t out of the question,” he said. “In fact, it’s probable.”

Click the chart below to see the total rent paid by the 25 largest metro areas, courtesy of Zillow. 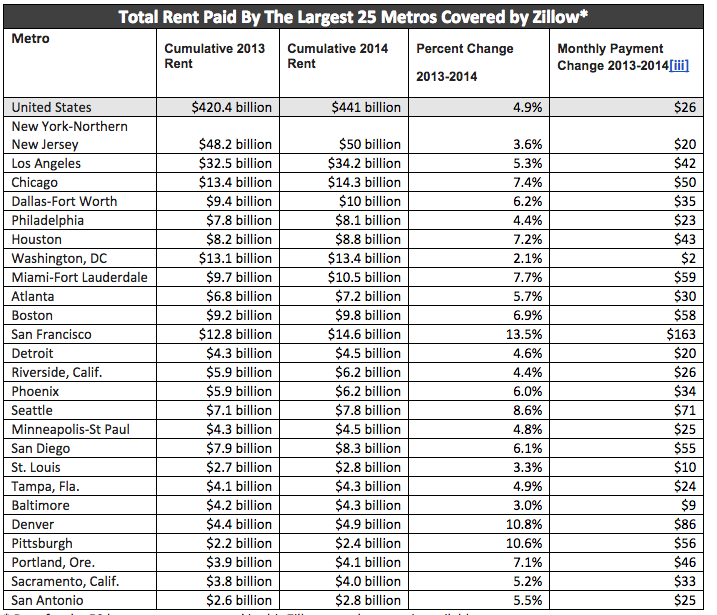