Mortgage servicing rights will get bought and sold in 2015, but the volume won’t reach the go-go days of 2012 or 2013, and the portfolios put out to market are expected to be smaller.

“It will be interesting to see what happens going into 2015,” said Scott Brown, vice president and head of mortgage servicing at Colorado-based W.J. Bradley Mortgage Capital, which has sold some of its MSRs over the past year.

The massive deals that made big headlines a year or two ago, however, aren’t in the mix, and some industry players expect to see more originators retain their servicing. 2014 was marked by a few large transactions but many small deals, the sum of which still paled in comparison to 2013 activity.

As 2014 was drawing to a close, one of the nation’s biggest nonbank servicers — Ocwen — continued to draw the ire of the New York Department of Financial Services,putting additional doubt on the already-on-hold $39 billion MSR transfer from Wells Fargo.

The regulator’s concerns about the deal could spill over into the broader MSR market. In mid-November the deal was finally canceled with Wells Fargo.

“I do think there has been and continues to be a lot of scrutiny on servicing transfers,” said Roelof Slump, managing director, Fitch Ratings.

“I think the regulators have been most focused on the impact on borrowers and their treatment pre and post servicing transfer and the smoothness of those transfers. That continues to be a concern.”

Any big deals will be watched closely as regulators examine whether servicers have the wherewithal to handle larger servicing volumes without negatively impacting consumers, said Ron D’Vari, CEO of New York-based NewOak Capital, which advises clients on MSR deals.

There are also concerns about whether servicers could handle a confluence of challenging issues such as an increase in delinquencies, interest rates and advances combined with a housing slowdown or major litigation, he said.

Some MSR transfers, if they are small enough, likely will remain under the radar of regulators next year as highly regulated banks continue to examine whether shedding more MSRs makes sense.

“The banks certainly are evaluating and optimizing their capital structure,” D’Vari said. “They will see whether they want to tie up capital (in MSRs) or move it. They may not want the (servicing) headache, especially if they’ve sold the (loan) portfolio.”

The Basel III accord and its unfavorable treatment of MSRs is one of the main reasons behind banks’ interest in shedding the asset. Basel III requires banks to increase the capital they hold against their mortgage servicing assets (MSAs).

Under Basel II, a bank holds 8% capital against MSAs, which are risk-weighted at 100%. The capital requirement rises to 20% under Basel III because the accord references a 250% risk weight for MSAs. As a result, banks are selling off mortgage servicing rights to less-regulated nonbank mortgage servicers, real estate investment trusts, hedge funds and private equity firms.

Mortgage servicing rights at U.S. banks and thrifts have declined by more than half since their peak in mid-2008, according to the Federal Housing Finance Agency Office of Inspector General.

In contrast, concentration of MSRs has risen sharply for the nonbank servicers over the past three years.

At Texas-based Nationstar Mortgage, one of the country’s largest and fastest-growing nonbank mortgage servicers, loans serviced by the company more than doubled to $283.3 billion in aggregate unpaid principal balance in year-end 2013, up from $126.5 billion from year-end 2012.

Nationstar signed commitments to acquire $43 billion in servicing acquisitions during the third quarter of 2014 and had closed on $16 billion in MSRs during the same period, according to its 3Q earnings report.

MSRs weren’t always in such hot demand. In the immediate aftermath of the housing crisis, mortgage servicing rights lost favor and traded for very little. As the price of MSRs plummeted, some banks and lenders opted to hold onto their servicing since it was garnering very little on the open market. During the housing downturn, sellers were lucky to get one or two bids on their MSR portfolios.

At W.J. Bradley, its MSR transactions generally equal about $1 billion in unpaid principal balance and attract about a dozen bidders for each portfolio, Brown said.

“We do our homework to make sure we are choosing the best counterparty,” Brown said. “What may look like the greatest bid on paper might not be someone we want to align with. What we are doing is handing our customer out to someone, and we want our customer well taken care of.”

Strong credit portfolios in the aftermath of the housing crisis and few refinances translate into a longer life for the MSRs, making them an attractive buy.

LenderLive Network didn’t buy any MSRs in 2014 but it probably will be bidding on some in 2015, said David Vida, president of the loan servicing division and chief strategy officer of the Denver-based mortgage services provider. 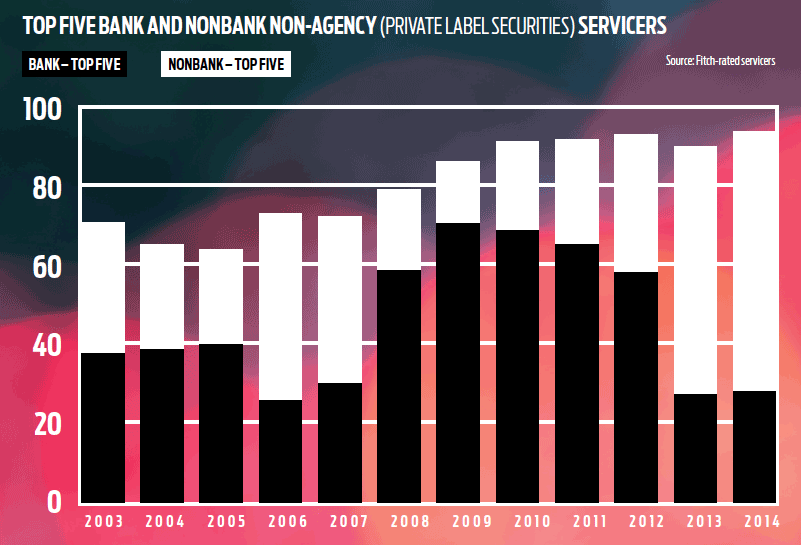 “There have been a few interesting pools that have come up that were unique that we were positioned to bid on (in 2014) but we just couldn’t get there,” Vida said. “Now we are seeing some MSR trades with (operating) platforms that might provide opportunities.”

Such platforms may change the overall servicing dynamic and its participants next year, he said. Such deals will only be of interest to LenderLive if the platforms make sense based on the geographical footprint or if they add something of value to the company’s overall offerings, Vida said.

“As hard as the market corrected over the past year, there haven’t been a lot of big-name mortgage companies that have gone out of business or sold, which is a little surprising,” he said.

“Some of the bigger guys aggregated servicing during that time or their strategies changed. What we don’t know is how many of those companies lived off of this asset and now they’ve sold too much of the asset. Can they survive in 2015?”

“There is a sense that the prepayment speeds are a little more predictable and the quality of the assets produced during the last cycle are pretty strong,” he said. 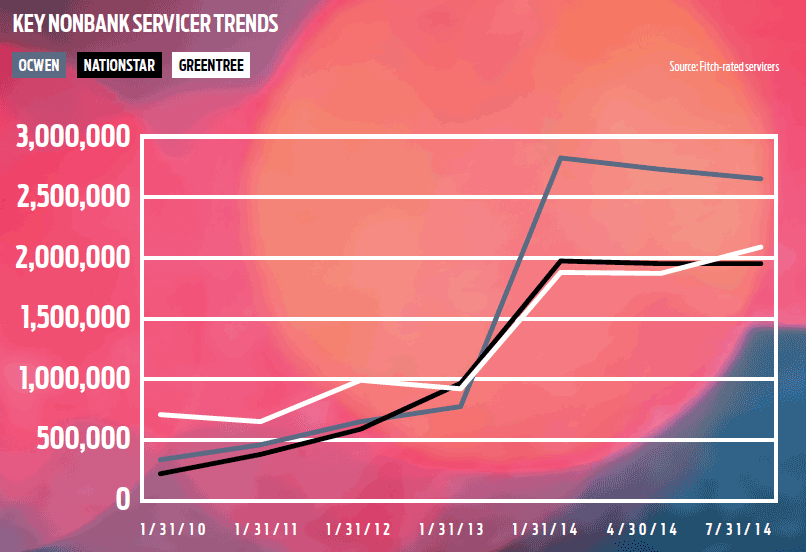 “We like the asset and we like the income that it spits off,” he said. “I think there is something to be said about more shops developing like ours, where they hold onto the asset. That is the way lending was done 30 years ago.”

MSRs are very sensitive to interest-rate fluctuations and can require financial institutions to write down the asset if the 10-year yield on Treasury notes declines.

Portfolio values can drop if interest rates decline to the point that the loans in the portfolio become refinance eligible.

“For some banks — not so much for us — they don’t want to hold hot assets on their balance sheet. They have enough interest-rate risk with loans held in portfolio,” Zugheri said.

Nonbank mortgage companies like MSRs because of the stable rate of returns they can generate that can offset volatility on the origination side of the business, he said.

“Depending on how efficiently you service, your ROI could be north of 8%,” Zugheri said.

In a fairly new development, warehouse lenders in greater numbers are allowing lenders to leverage their MSRs by borrowing against them. How that might affect the market for MSR transactions going forward remains to be seen.

“That’s kind of a new thing and I don’t know how it will play into the MSR sales that are going on,” said W.J. Bradley’s Brown. “Will players opt to sell or will they opt to leverage?”

To be sure, the risks are out there for players in the space, including investors of RMBS. 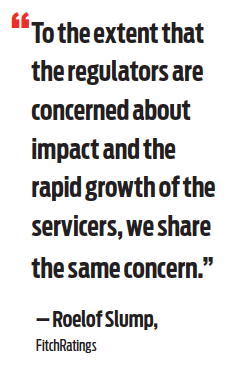 Fitch Ratings has taken negative rating actions on a number of RMBS transactions over the past 24 months due to a higher risk of a servicer disruption among some of these companies.

“We have also been concerned about the impact on the securitizations to the extent that the new servicer had different methodologies related to things such as servicer advances into the trust and the recoverability of those advances.

“That can have a potential impact on bondholders and that’s something we remain focused on,” Slump said.

While the CFPB and state regulators have some authority over nonbank servicers, many of them are not subject to capital, liquidity or risk management oversight.

A mortgage investors’ ability to collect on mortgages might be dependent on a single mortgage servicing company, where failure could have significant negative consequences.

There are also potential risks to Fannie Mae and Freddie Mac as more servicing moves to nonbank entities.

The FHFA OIG said this summer that nine of Fannie Mae’s top 20 servicers are not banks, and account for 28% of the overall group’s loan volume, or 3.6 million mortgage loans with approximately $600 billion in unpaid principal balances.

If market conditions deteriorate, nonbank special servicers may not have the same reserves as banks to meet those challenges and continue servicing the loans without interruption, according to the OIG.

“To the extent that the regulators are concerned about impact and the rapid growth of the servicers, we share the same concern,” said Slump.

The Financial Stability Oversight Council recommended in its 2014 annual report that state regulators “work together to collaborate on prudential and corporate governance standards to strengthen these companies, in collaboration with the CFPB and FHFA, as may be deemed appropriate.”

If a servicer buys smaller volumes, the servicer may be growing its portfolio more slowly or simply keeping pace with portfolio runoff.

Onboarding fewer MSRs at a time would mitigate some concerns over fast growth, Slump said. Smaller transactions can be easier to manage with less impact on the servicing system and the staff and potentially fewer issues with differences between servicing approaches between the old and new servicer. 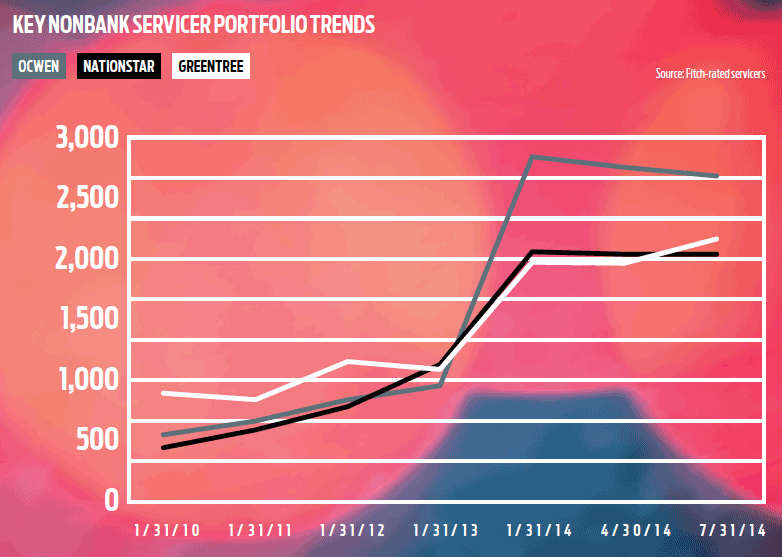 “If a servicer is doing many, many small transactions and they continue to grow quickly, that will be a concern to us and probably would also be a concern to a regulator as well,” he said. “Any pause to rapid growth of nonbank servicers,” Slump said, “would be a positive.”

Smaller transactions are expected to rule the day in 2015. In addition, servicers interested in offloading difficult portfolios may elect instead to subservice those out instead of selling, Slump predicted. “I do expect subservicing to increase in the future,” he said.

The increasing number of private-label securities being serviced by nonbanks concentrates the risks by entities that are inherently riskier than banks.

Whatever happens, plenty of players will be involved, and observers will be keeping watch.

“It’s an exciting market to be in right now,” Brown said.