The results are in, and some aren’t good. But, it may still beat working at another federal agency.

According to the Consumer Financial Protection Bureau’s annual employee survey, staffers are most concerned with the leadership and management, in a filed laundry list of grievances.

The good news is that 91.2% like the work they do and 88.7% feel like their supervisors treat them with respect.

The results "show overall employee satisfaction at the CFPB is in fact considerably higher than the Fiscal Year 2013 government-wide average," a CFPB spokesperson explained to HousingWire via email. In other words, working conditions at the CFPB more than meet federal standards, he said.

However, 43.6% feel that in their work unit, differences in performances are not recognized in a meaningful way. This is significantly up from 30.4% in 2013.

Also, 42.6% disagree that pay raises depend on how well employees perform their jobs, a drastic decline from only 28.6% in 2013. 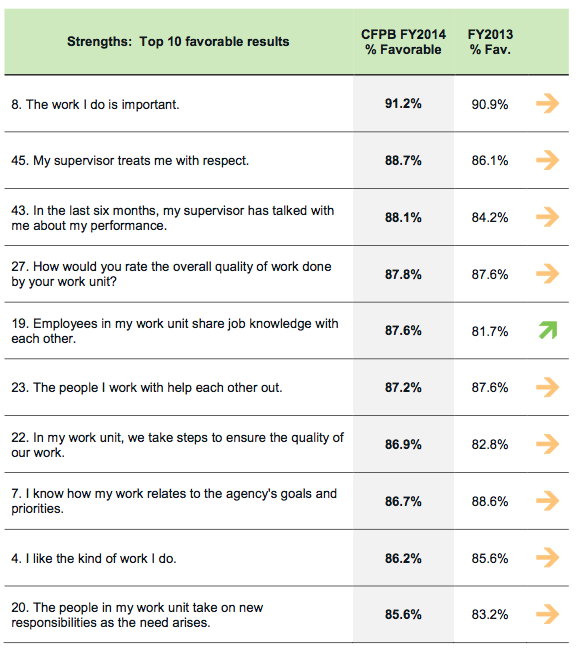 HousingWire has been covering the story of the alleged discrimination at the CFPB since March and will continue its coverage, and many of the revelations and accusations to date have been shocking to observers on both side of the political aisle.

And not surprisingly, the most improved on the survey was the work environment.

The CFPB was under severe scrutiny earlier this year for its building renovation that went significantly over budget and cost at least $185 million.

According to the survey, employes agreed that “physical conditions (for example, noise level, temperature, lighting, cleanliness in the workplace) allow employees to perform their jobs well, which was up 15.7% from last year.

In an interview with HousingWire, FHFA Director Mark Calabria announced that the agency will not be making any servicer liquidity coming – a move that prompted protest from the Mortgage Bankers Association.