For many companies in the U.S., both within the housing industry and outside of it, the practice of using offshore employees, commonly known as offshoring, has become more common in recent years.

The reasons behind the increasing trend of offshoring are pretty simple. It’s simply cheaper to employ workers based in India, the Philippines, and other foreign countries than it is to employ workers in the U.S.

In a new report, Fitch Ratings details the rise in offshoring, particularly among the nonbanks, and why the practice of offshoring should be concerning for both consumers and investors.

“As banks offload the servicing of legacy private-label securities portfolios, often with high delinquencies, some of the nonbank servicers that are acquiring them have scaled up their use of off-shore resources including both voice and non-voice functions in order to remain cost competitive,” Fitch’s Thomas Crowe said in the report.

“At the same time, large bank servicers have been scaling back the use of offshore resources, especially for voice functions, as their inventory of seriously delinquent loans has significantly declined.”

Fitch said that despite the additional costs of management oversight, building offshore infrastructure and training offshore employees, the cost savings have been “particularly useful” to entities that are not as strong financially as the big banks.

But Fitch said there are numerous issues that arise from the use of offshore staff in customer-facing positions.

Click the chart below to see just how much offshore staff that Citi, JPMorgan, Nationstar, Ocwen, Wells Fargo (WFC) and Bank of America (BAC) use. 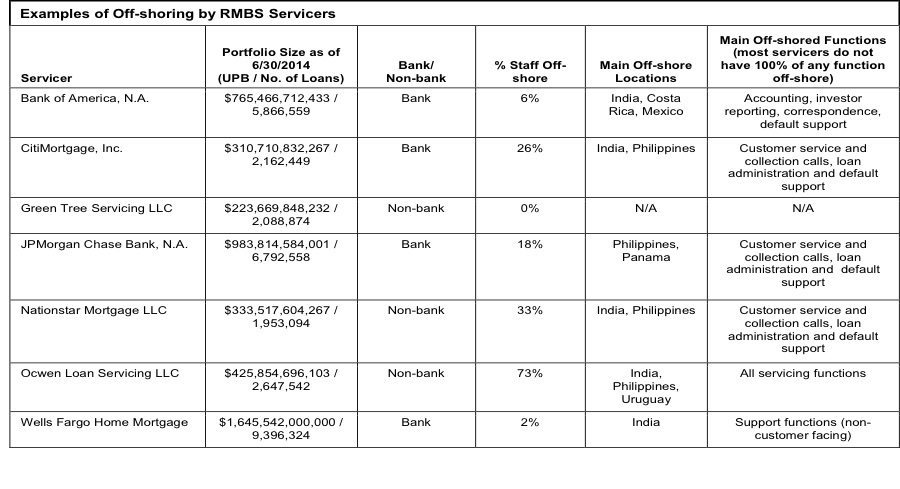 Fitch said that one of the main issues is the ability of offshore staff to handle complex tasks such as later stage collections or loss mitigation procedures.

Another issue with offshore operations is a higher turnover rate than for U.S.-based employees, which Fitch said results in a lower experience level for the call center staff.

“Less experienced offshore staff can lead to ineffective communication with borrowers,” Crowe said. “Even with effective scripting, an offshore call center agent typically does not have the same frame of reference or local knowledge as a U.S. based call center agent. Fitch has found that reliance on scripting works best when calls are predictable and do not deviate from the norm.”

But as any borrower can attest, the nature of the calls can be anything but predicable.

And with an outsized portion of nonbank servicing focused on delinquent or defaulted loans, the ability of customer-facing personnel to be able to go “off script” is crucial.

“Servicing disruption risks can arise in the event of business discontinuity or disaster,” Crowe said. “Fitch believes that effective mitigants to this disruption risk typically incorporate a strong presence in the U.S. and robust business continuity plans to quickly move offshore functions back to the U.S or to other off-shore locations or vendors if necessary.”

Fitch visited mortgage servicing sites in India and provided some additional details on the working conditions in the offshore call centers.

A more significant emphasis is placed on physical and data security in the offshore call centers. Employees are not allowed to bring cell phones or PDA devices into the work area. Access to email is restricted and all USB, CD-ROM, printers and web access are disabled.

Also, workers in India have work schedules that mimic those in the U.S., so that they are available when customers in the U.S. would most likely be calling.

But those hours prevent offshore staff from using public transportation, therefore travel between operational sites can be difficult and take an extensive amount of time.