The year’s largest portfolio of pre-bust non-agency debt is set to trade this week. Investors looking to get their hands on vintage subprime, Alt-A fixed-rate, or Alt-A adjustable rate bonds will have plenty of opportunities when $4.6 billion in vintage debt hits the market Tuesday.

According to bond analytics firm Interactive Data, the portfolio of vintage debt is the largest of 2014, surpassing the January liquidation of the ING US portfolio from the Dutch State Treasury Agency, which checked in at $4.3 billion.

There are 465 individual line items available for purchase in the portfolio, spread across a variety of trance types. Per Interactive Data’s breakdown of the bonds, there is $2.4 billion in subprime, $1.06 billion in Alt-A ARM, and $709 million in Alt-A FRM available among the $4.6 billion package.

In total, subprime and Alt-A account for $4.2 billion or 90% of the total bonds available.

The majority of the subprime debt is from the height of the subprime lending craze, 2006 and 2007. Included among the list are bonds from Bear Stearns, Countrywide, Goldman Sachs, Structured Asset Investment Loan Trust, Ace Securities, Morgan Stanley ABS Capital Trust, and others.

Many of the individual line items exceed $20 million, with several exceeding $40 million per line item.

It’s not all subprime and Alt-A in the portfolio though. There is also prime hybrid, prime 30-year FRM, HELOC and even a few lines of second lien.

Click the image below for a breakdown of the available bonds, courtesy of Interactive Data. 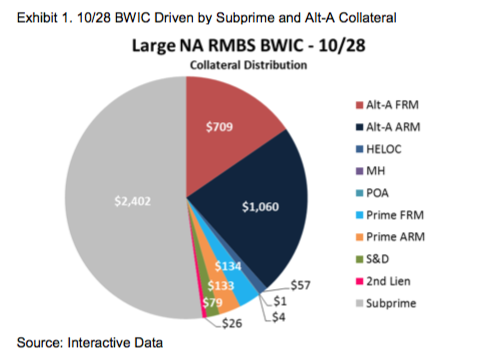 This trade will be the latest in a trend that has seen an increase in subprime debt trading in the last several months. The subprime market was dormant after the Dutch trade in January. In July, the market finally awoke with BlackRock sale of $3.7 billion in debt on July 15.

At the end of July, an undisclosed seller brought $640 million in non-agency subprime debt to the market.

In August, $366.14 million in subprime bonds traded. That list featured some of the most notorious names in subprime lending, including: Ameriquest Mortgage, Countrywide Financial, Bear Stearns, Goldman Sachs, JPMorgan, and Citigroup.

Plus, earlier this month $885 million in subprime debt exchanged hands as part of a $998 million package. The remaining debt was made up of $73 million in bonds backed Alt-A fixed-rate mortgages and $40 million in Alt-A adjustable-rate mortgages.