One of the guys portrayed in “The Wolf of Wall Street” is putting his 7,500-square-foot luxury TriBeCa townhouse on the market for $43.5 million.

And he’s doing a “For Sale By Owner.”

The place is ultrahip and posh.

Zillow has the rundown on that.

Alan Wilzig envisioned a nightclub when he designed his 7,500-square-foot luxury TriBeCa town house nine years ago. He built it with an automated lighting system so that every light in the house can be regular, or, with a touch of a button, any of 64 colors. He and his wife, Karin Wilzig, moved there in 2005, and a few weeks later his first child was born.

“The first time the house was bathed in colored light wasn’t for some disco party on a Saturday night, it was for the bris of my son,” he said. “We made it baby blue, and then made it pink for the baby-naming of his sister. … The reality is, it became a successive series of pink Hello Kitty birthday parties.”

The 3-level home  is accessed through an underground passageway from the condo building next door. The home has bullet-proof windows and a security and entertainment system, plus a cellphone-boosting system.

Definitely hip, which is why one can understand why he’s a little upset over how he was portrayed in the movie – as a square party-pooper known as "Blair Hollingsworth." 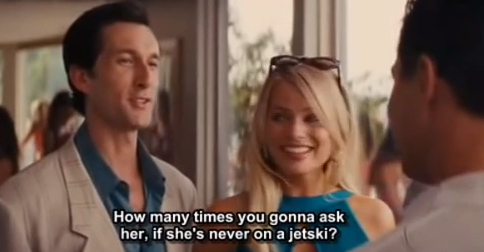 CHARITY CONTEST TIME ! So 20-odd years ago while "The Wolf" was still growing his fangs – I had my first post-college relationship. We lived to together over a year and it was nice and then went on and off which was anything but nice. Like high-school but more adult-vicious  So at the end of year 2, as friendly-exes I took Nadine to Jordan Belfort's July 4th Westhampton Beach House party where the two of them met. The final 6 mos of the ROARING 80's , literally & figuratively. He left his high school sweetheart wife to marry her ; and the rest you can see in the movie. They fictionalized my brief cameo in this story by making me super-dork  My friend who makes films saw a preview with Scorsese and told me they emphatically do NOT show me bringing her to the party in my Red Ferrari Testarossa that I was driving then (she was out to dinner in HIS white TR the next night  And of all things – "Leo as Jordan" mocks the "me" guy by saying " What ? You've never taken this girl for a ride on a JET SKI ?" (I told you it was fictionalized). First person to TAKE A PHOTO OF THAT SCENE ( I've yet to see it, and we have no babysitter so I can't for at least 2 days) SHOWING "ME", LEO & THE GIRL- gets to pick a charity who will receive $1000 from me by Friday morning at 10am (if in the US). NOW GO GET (and post) THE SHOT; and make some (IRS registered) org extra happy ! (and for those that followed in real-time or Timeline – I TOLD you I had "different (read as : ABHORRENT !!) values" when I met Karin which is why it took me a few months to realize what I had……

As real estate professionals adapt to market shifts, they continue to turn to proptech companies to help them provide clients with a streamlined experience.