Another massive portfolio of subprime vintage non-agency debt hit the market on Wednesday, with investors gobbling up nearly all of the $1 billion in pre-bust bonds.

According to bond analytics firm Interactive Data, a $998 million package of legacy debt from 2006 and 2007 came to market on Wednesday morning with nearly all of the bonds trading hands.

“It looks like a decent execution,” said David Varano of Interactive Data. “Nothing covered below low end, but several traded at the upper end.”

Interactive Data also said that all but two of the bonds bid for the entire current face value of the respective tranche, "signaling that a GSE is the likely seller of these legacy bonds."

Click the image below to see Interactive Data’s breakdown on the size and pricing of the bonds traded Wednesday. 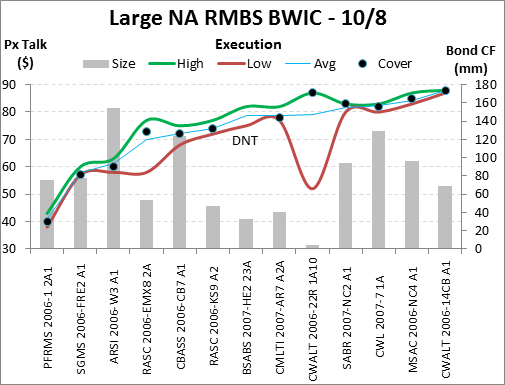 Also among the bonds that traded Wednesday were:

The trade was the latest in a trend that has seen an increase in subprime debt trading in the last several months. The subprime market was all but dead from January until July. Since then, several large packages of subprime bonds have traded.

In August, $366.14 million in subprime bonds traded. That list featured some of the most notorious names in subprime lending, including: Ameriquest Mortgage, Countrywide Financial, Bear Stearns, Goldman Sachs, JPMorgan, and Citigroup.

In July, two separate bond deals from BlackRock roused a market that had been slumbering since January, when the Dutch State Treasury Agency liquidated the last $4.3 billion residential mortgage-backed securitization remaining from the ING US portfolio.

The January 16 sale of the ING portfolio was the largest single day of non-agency RMBS selling activity prior to the BlackRock sale of $3.7 billion in debt on July 15, according to Interactive Data.

And at the end of July, an undisclosed seller brought $640 million in non-agency subprime debt to the market.