For more than a year HousingWire has been reporting on the link between high levels of student loan debt and the struggling housing recovery.

With college debt increasing by about 6% every year, there is every reason to believe this trend will continue, and probably worsen, the firm reports.

Their report estimates that heavy college debt will reduce real estate sales by 8% for this year, and that households that pay $750 or more for college loan debt each month are priced out of the housing market entirely.

Given how important debt-to-income ratios are now with the Qualified Mortgage rules.

Another recent study found that when parsing mortgage applications of those with student loan debt, approved borrowers had monthly college loan payments of about $300.

Mortgage applicants paying nearly $500 per month, however, were usually denied. 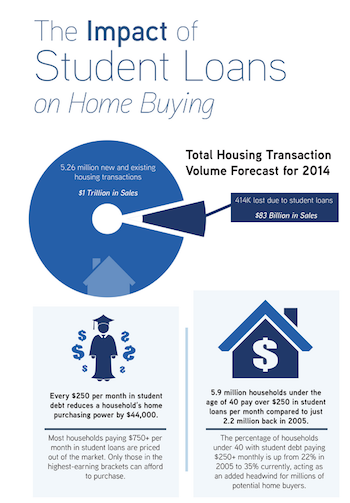 “The analysis was quite complicated and involved a few assumptions, but we believe it is conservative, primarily because we looked only at those under the age of 40 with student debt,” analysts Rick Palacios Jr. and Ali Wolf wrote.

Here is the math:

About 8% of the 20–39 age cohort usually buys a home each year, which would be 1.35 million transactions per year.

“Using previous academic literature as a benchmark for our own complicated calculation, we then estimated that today's purchase rate is reduced from the normal 8% depending on the level of student debt—ranging from 6.9% for those paying less than $100 per month in student loans to less than 1% for those paying over $1,300 per month. Other factors contribute to even less entry-level buying today,” they wrote.

John Burns Real Estate Consulting raised the red flag on student debt back in 2011 and continues to believe that this debt will delay homeownership for many, or at least require that they buy a less expensive home.

Finicity, an open-banking solutions provider that was acquired by Mastercard in October, announced that it is dipping further into the mortgage space.