Black and Hispanic Americans are less likely to apply for a mortgage than any other ethnic group, and it looks like QM and ability-to-repay rules are exacerbating the problem.

This was one of the focuses of the recent Bipartisan Policy Commission summit in Idaho, where the consensus was that the credit pendulum has swung too far to the restrictive side.

Contrarily, other analysts are concerned the push to open up the credit boxes and lift credit overlays will bring a return to high-risk, subprime lending, the kind which collapsed the housing market.

Fewer minorities apply for conventional mortgages than whites, a study by Zillow and the National Urban League found earlier this year.

Although Hispanics and blacks make up 17% and 12% the U.S. population, respectively, they represented only 5% and 3% of the conventional mortgage application pool.

Click the image below to see the ownership rates among the four ethnic groups in the study.

One in four blacks will be denied a conventional loan application, as opposed to one in 10 whites.

“As a result, far fewer African-Americans have achieved the American dream of homeownership,” the survey states. “And those who own homes were hit hard by the housing bust and are recovering at a much slower pace.”

All of this is brought further to the forefront by the tighter lending standards in the industry that have gone into effect either by QM and ATR requirements, or because lenders are overly cautious about skirting the edges of QM and have bigger credit overlays.

In both recent HMDA data and the Zillow/HUD survey data, blacks and Hispanics had a lower average income than other ethnic groups. 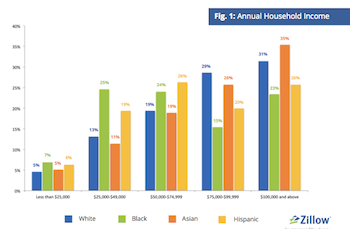 Blacks and Hispanics who apply for a mortgage are also much more likely to have a lower credit score compared to whites and Asians.

Separately, Asians are much more likely to have achieved a higher level of education, which also contributes to their higher incomes.

These unequal incomes naturally lead to stark differences in the amount of down payment that people from different races are able to afford. Blacks are much more likely to put down 5% or less as a down payment, while a majority of Hispanics contribute 6%.

The losses have had a huge impact on wealth, according to Shaun Donovan, former secretary of the U.S. Department of Housing and Urban Development.

"African-Americans and Hispanics have had a higher share of their wealth tied up in their homes than whites," he said.

The bulk of household wealth in the United States is gained from the appreciation of home values.

Fully 25% of Americans' wealth comes from the increased value of homes, but that rises to almost 50% for blacks and Hispanics.

A recent study conducted by the Russell Sage Foundation, household net worth dropped from the beginning of the housing crash in 2007 through the end of the study data in 2013.

According to the foundation’s study, lower-income and lower-credit households lost 60% of their accumulated wealth.

Notably, in that same time period, about 25% of black and Hispanic homeowners lost their homes to foreclosure or became seriously delinquent, compared to less than 12% of white homeowners.

Wide disparities in homeownership rates among ethnic groups persist. According to data from Zillow/HUD, 73.9% of whites own a home, whereas 60.9% of Asians, 50.9% of Hispanics, and 46.5% of blacks own. 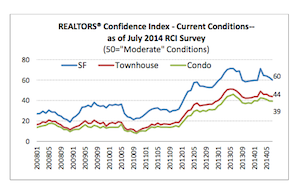 Some of Keller Williams’ agents slammed the recent white male musical chairs. But the brokerage is hardly alone in lacking diversity at the top. HW+ Premium Content