Yellen stressed again there is considerable uncertainty about the nation’s economic outlook, and that the housing and housing finance industries continue to be troubled. 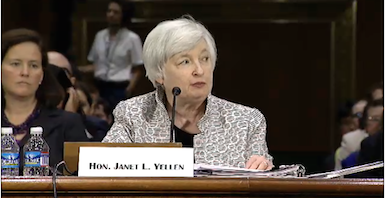 “If the labor market continues to improve more quickly than anticipated by the Federal Open Market Committee, resulting in faster convergence toward our dual objectives, then increases in the federal funds rate target likely would occur sooner and be more rapid than currently envisioned,” Yellen said.

Here's a look at the labor market situation, courtesy ZeroHedge. 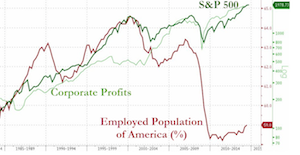 Yellen said that she and her fellow central planners were looking out for asset bubbles but they only see it in a few sectors, like social media.

“While prices of real estate, equities, and corporate bonds have risen appreciably and valuation metrics have increased, they remain generally in line with historical norms,” Yellen said.

On interest rates, Yellen said rates should be raised, putting her oddly in agreement with CNBC's Rick Santelli.

Yellen was realistic about the flatline state of the housing industry.

"The housing sector, however, has shown little recent progress. While this sector has recovered notably from its earlier trough, housing activity leveled off in the wake of last year's increase in mortgage rates, and readings this year have, overall, continued to be disappointing," she told senators.

Yellen has previously admitted that the housing “recovery” is disappointing.

"The recent flattening out in housing activity could prove more protracted than currently expected rather than resuming its earlier pace of recovery," she said.

Yellen said overall, the economy is “continuing to make progress toward the Federal Reserve's objectives of maximum employment and price stability.”

In the labor market, gains in total nonfarm payroll employment averaged about 230,000 per month over the first half of this year, a somewhat stronger pace than in 2013 and enough to bring the total increase in jobs during the economic recovery thus far to more than 9 million.

She did not address the alarming number of those jobs which are part-time.

Yellen also acknowledged the economy tanked in the first quarter.

“Real gross domestic product (GDP) is estimated to have declined sharply in the first quarter. The decline appears to have resulted mostly from transitory factors, and a number of recent indicators of production and spending suggest that growth rebounded in the second quarter, but this bears close watching,” she said. “Although the economy continues to improve, the recovery is not yet complete. Even with the recent declines, the unemployment rate remains above Federal Open Market Committee (FOMC) participants' estimates of its longer-run normal level. Labor force participation appears weaker than one would expect based on the aging of the population and the level of unemployment.”

Yellen said she still expects a snap back from the first quarter.

“Although the decline in GDP in the first quarter led to some downgrading of our growth projections for this year, I and other FOMC participants continue to anticipate that economic activity will expand at a moderate pace over the next several years, supported by accommodative monetary policy, a waning drag from fiscal policy, the lagged effects of higher home prices and equity values, and strengthening foreign growth,” Yellen said.

She said there are still challenges.

“Yet too many Americans remain unemployed, inflation remains below our longer-run objective, and not all of the necessary financial reform initiatives have been completed,” she said.