Some 10,000 Baby Boomers reach retirement every day, exiting a world dependent on jobs and kids and into a new lifestyle that drastically adjusts their housing choices, a commentary by Patrick Simmons, director with the Economic and Strategic Research Group of Fannie Mae, said.

The common perception is that the generation born between 1946 and 1964 is starting to downsize from suburban single-family homes to urban multifamily residences as they become empty nesters.

But this assumption is not true, and in fact, the truth is quite the opposite.

Simmons explained, “Despite these life transitions, one key metric of boomer housing consumption – the proportion of the population residing in a single-family detached home – has yet to decline.”

And instead of the downsizing perception, the percent of Baby Boomers residing in single-family detached homes was at least as high in 2012 as at any time since the onset of the housing crisis.

This trend even includes the oldest members of the boomer generation, who have largely exited the childrearing stage and begun to retire in large numbers.

Between 2006 and 2012, the proportion of leading-edge boomer households consisting of a married couple with at least one child under age 18 significantly fell from 10% to a mere 3%.

And younger boomers are posting much of the same numbers, with the share of nuclear families among this group declining from 35% to 20%.

As a whole, the number of traditional family households dropped by more than 5 million between 2006 and 2012 for boomers. 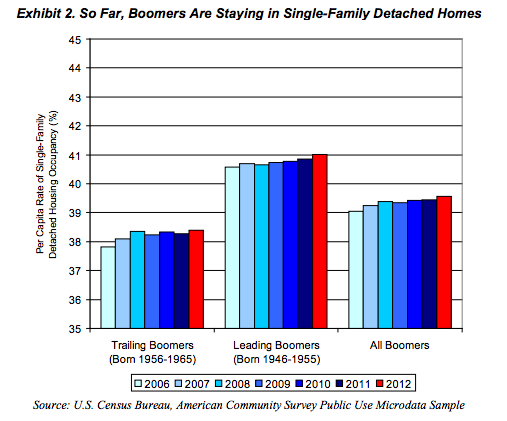 Furthermore, boomers are increasingly stepping away from the workforce. Between 2006 and 2012, the proportion of all boomers who were not in the labor force increased by 9 percentage points.

But despite all these variables, this generation is not leaving their detached single-family homes, but  why?

Click the next page to find out the three reasons.

1. They could simply love their current home.

According to a survey by AARP in 2010, nearly nine in 10 Baby Boomers prefer to remain in their current residences for as long as possible.

From 2006 to 2012, the average value of an owner-occupied single-family detached home with a boomer householder declined by 13%. Even more, the decline in home values means that they are in a negative equity position on their mortgage, making it difficult to sell the home and move. And for those without a home underwater, they might want to still wait to recoup more of their home’s former value.

3. They might not be able to find a home to buy.

It is also a concern that if they wish to sell, they might have a hard time finding buyers for their existing homes or they might face an inadequate supply of homes to purchase should they choose to stay owner-occupants. Between 2006 and 2012, the percent of boomer householders who moved during the preceding year dropped from 10.2% to 7.9%.

“The stability in single-family detached occupancy among Baby Boomers will eventually come to an end, if not by boomers’ choice, then as a consequence of advancing age or mortality that would make it difficult or impossible to maintain a single-family home,” the commentary said.

It is important to note that the commentary is using data available only through 2012, so the trends might miss more recent changes in boomer housing behavior in response to the continued recovery of the housing market and economy.

Still curious? The next issue of HousingWire’s Magazine will feature more on Baby Boomers.  Click here for more information.