There is roughly one month left until summer, and the spring home buying season has yet to kick into high gear, causing Freddie Mac to revise and lower its forecast in several areas on an annualized basis.

"The housing recovery is struggling to shift into a higher gear, and obviously there are various imbalances holding this back from happening, but at the heart of the matter it comes down to jobs,” said Frank Nothaft, Freddie Mac vice president and chief economist.

“Housing needs stronger, and just as important, sustained levels of job creation to get the housing engine firing on all cylinders. April's jobs numbers were encouraging, and nothing will solve the supply and demand factors faster than keeping employment growth going,” Nothaft said.

As a result, Nothaft explained that Freddie is revising its forecast lower in several areas on an annualized basis.

Despite an improving trajectory in the housing market, the earlier forecast is being pushed back a few months because Freddie expects GDP growth to pick up in the final three quarters of the year from what was clearly a dismal first quarter reading.

Between mortgage rates, home sales and household formations, what Freddie expected to be happening isn’t happening.

But why? Here are Freddie's three reasons for its revised forecast: 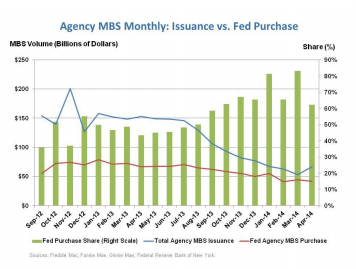 The Federal Reserve started its third round of quantitative easing, with its latest announcement that the committee will add to its holdings of agency mortgage-backed securities at a pace of $20 billion per month, compared to $25 billion per month.

During this period, mortgage rates have largely held steady, with fixed-rates even dipping in early May to the lowest level since early November.

“The Fed’s ‘demand’ for new MBS has declined less than has new ‘supply’, thus keeping the Fed’s share of MBS issuance above year-ago levels,” Freddie said.

As a result, the market is currently enjoying lower than expected mortgage rates.

Freddie forecasts that the 30-year, fixed-rate mortgage will gradually rise to around 4.6% by the end of the year as the Fed continues to taper.

Back in November 2014, Freddie Mac told HousingWire that it expects interest rates to steadily rise throughout 2014, with the 30-yr, FRM ending the year near 5%.

Home sales down, prices up 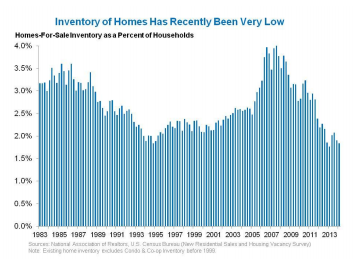 The current months’ supply of existing homes on the market remains low, at 5.2 months in March.

Meanwhile, the total number of homes offered for sale relative to the number of households in the U.S. has been running at the lowest level in more than 30 years, as various factors keep people from selling their homes.

Although housing starts have increased substantially from their trough in 2009, they still remain at depressed levels, with a key reason being the lackluster rate of household formations.

Currently, Freddie said net formations (gross formations less household dissolutions) have averaged barely better than 500,000 per year since the Great Recession, compared with an average of more than one million per year in the decade before.

Harvard’s Joint Center for Housing Studies is projecting an average of 1.2 to 1.3 million per year over the 2015 to 2025 decade.

Since household formations are traditionally the largest driver of the demand for new housing, when demand is weak, net new supply will be reduced as well.

“A pickup in household formations—an increase in demand for additional housing, in economists’ parlance—will require stronger job growth. We understand that we might sound like a broken record here, along with many other economists, but the need to have a job before buying a house is a simple fact of life,” Freddie said. 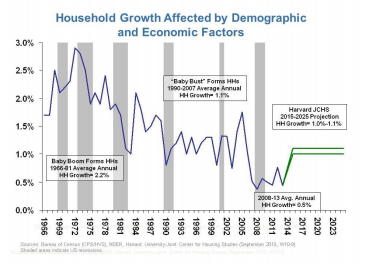