Redwood Trust (RWT) revealed its 11th private-label residential mortgage-backed securitization deal of the year — and its first this month. This deal, the smallest of the year thus far, surprisingly features more loan sellers selling into the pools than ever before, up to 77 sellers from 72 mortgage sellers in the previous deal.

The next smallest deal was the first, with a total unpaid principal balance of $397 million.

"This transaction shares a number of characteristics with the sixteen previous KBRA-rated SEMT securitizations issued in 2012 and 2013. As detailed below, CLTVs have remained in the 65%-70% range, with a significant concentration of 31% at the pool at exactly 80% CLTV," Kroll said in its presale report for the transaction.

“There are no loans with a CLTV of greater than 80%. Average borrower FICO scores remain in the 765-775 range. The vast majority of properties in the pool are primary residences (96%), and income is well-documented for all borrowers,” the report added. 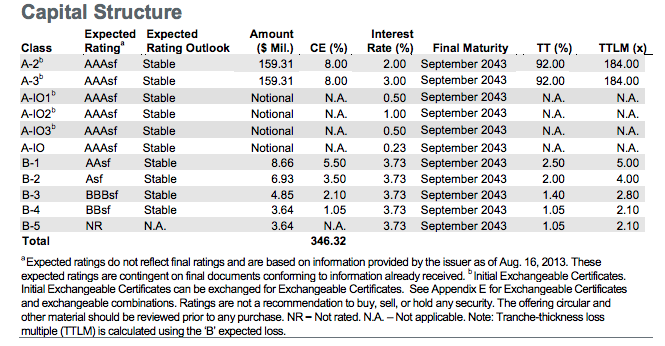 “Although the overall collateral characteristics are generally similar to SEMT 2013-10, the combination of slightly different attributes resulted in a higher ‘AAAsf’ expected loss of 7.25%. The weighted average (WA) combined loan to value (CLTV) is higher to that of SEMT 2013-10 (70.1% compared to 68.1%), while the WA Fair Isaac Corp. (FICO) of the SEMT 2013-11 pool is lower (773 compared to 775),” the Fitch Ratings presale report stated.

“Also, as previously described, SEMT 2013-11 exhibits more concentration in geographic areas compared to the prior transaction.”

The platform will contain 606 loans, comprised entirely of 30-year fixed-rate mortgages. The transaction is supported by a pool of FRM loans with strong attributes, according to Fitch. Compared to the prior SEMT transaction, the pool has less geographic diversity, with the top three states comprising 61.5% of this pool, compared with 57% in SEMT 2013-10.