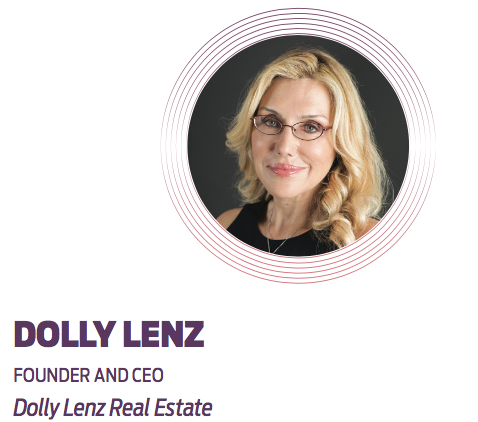 After 25 years as a senior real estate executive with Sotheby’s International Realty and Douglas Elliman operating in sales, marketing and branding, Lenz founded DLRE with a handpicked team of veteran professionals. Deciding against taking a transactional approach, the firm operates under the private banking model, providing advisory services to its clients in every part of the globe and at all price points.

Drawing upon decades of experience and market-specific knowledge, its operating paradigm is powered by market specific information, cutting edge innovation and an unrivaled client database. It is estimated that through 2007 Lenz sold a full $7 billion in real estate including $748 million in 2006. But that was only the beginning. During her illustrious career, she has sold more than $11 billion in property. This amount includes two of her most recent record-setting sales, a $57-million triplex penthouse, which she sold to billionaire Rupert Murdoch, and The New York Foundling’s West Village Mansion, which Lenz sold for $45 million. In fact, this $11 billion record has even earned Lenz the ultimate Stratosphere Award, a level of achievement of which she is the sole recipient.

Her firm currently now represents more than $500 million in luxury properties. And due to the depth of her experience and the breadth of Lenz’ knowledge in real estate matters, she is repeatedly sought after to represent some of the most exclusive properties in the world. As a regular guest on CNBC’s Power Lunch, Kudlow Report and Fox News with Neil Cavuto, as well as appearances on MSNBC, Bloomberg TV and The View on ABC, Lenz has developed a broad following and continues to opine on current real estate issues in various media publications including The New York Times, Wall Street Journal, The Financial Times and Barrons. Lenz is a CNBC contributor and is featured on CNBC’s documentary series called: Mega Homes: Secret Lives of the Super Rich. She is also the host of CNBC’s real estate special series Million Dollar Home Challenge. In addition to her media presence, Lenz also sits on various charitable boards including New York City’s Police Athletic League, The Lincoln Center Council, and The Chopra Foundation.