As the summertime heats up, so are July’s rental prices, according to Zumper’s latest National Rent Report.

According to the company’s data, the rental price for a one-bedroom unit slightly increased by 0.3%. However, rental prices for two-bedroom units fell by 0.1% this month.

This means it now cost the average renter a median of $1,220 and $1,469 to rent the average one-bedroom and two-bedroom units, equating to an annual increase of 0.8% and 1.9%, respectively.

Zumper notes that San Francisco has the largest monthly growth rate for one-bedroom units. In this expensive housing market rent for the average one-bedroom unit has increased by $20, hitting another peak of $3,720.

Interestingly, New York City, which was last month’s most pricey metro, took a slight dip after hitting its 3-year peak in Zumper’s last rent report. In the Big Apple, the average rent for a one-bedroom unit has fallen by 1.3%, totaling $2,940.

According to Zumper, the other top 10 markets saw some adjustments as San Jose replaced Boston as the third priciest metro and D.C. outpaced Los Angeles to become the fifth in the nation. Additionally, Oakland, California, also became a bit more affordable this month, as its rental market became the 7th most expensive.

Notably, Zumper also revealed that there are now more double-digit annual rental dips in the mid to lower tiered markets, signaling a cooling off from last year.

Of these changes, Raleigh had the fastest-growing rent as prices increased by 5.1%. On the other end of the spectrum, Chicago and Bakersfield saw the largest dips as rental prices in both markets fell by 5.1% from 2018, according to the report.

The chart below displays the 24 most expensive rent markets and how they moved in July, according to Zumper. 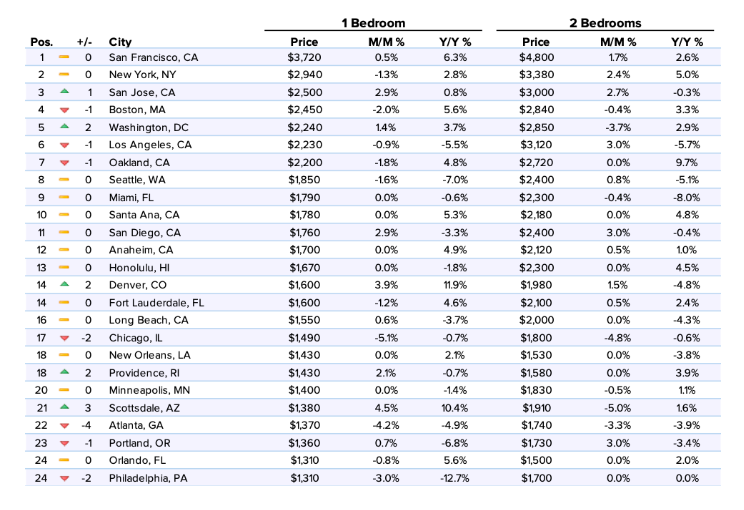