Washington ranked as the best state economy for 2019, followed by Utah, Massachusetts and California, according to a WalletHub study. Alaska had the worst economy, followed by Louisiana, Mississippi, Hawaii and West Virginia.

“U.S. economic growth depends heavily on the performance of individual states, but some contribute more than others,” the report stated. “California, for instance, blossomed in 2017 as the fifth largest economy in the world, boasting a GDP larger than that of countries like the U.K., France and India. Meanwhile, Alaska, a state with valuable natural resources, is struggling with the highest unemployment rate in the country, at 6.5%.”

Washington, the top-performing state, ranked No. 1 for economic activity and No. 2 for innovation potential. Its performance was boosted, of course, by tech giants Microsoft and Amazon, who call it home. Four decades ago, when Jeff Bezos was a teenager and Bill Gates had just moved his dozen employees to a Seattle suburb from New Mexico, the Commerce Department put Washington as No. 17 for GDP growth.

Massachusetts, which ranked No. 3 overall, was the No. 1 state for innovation potential, according to the WalletHub study. Boston consistently ranks high on lists of U.S. startup hubs, after San Francisco and New York. Amazon is constructing a new office building on the waterfront to house Alexa, Amazon Web Services and Audible employees. In 2016, General Electric moved its headquarters to Boston, and on Sunday United Technologies said it is merging with Raytheon and moving its headquarters to Boston.

Utah, which ranked No. 2 overall, was No. 10 for innovation potential. However, it came in second for economic activity and was No. 1 for economic health.

Here is the top 10 ranking with details: 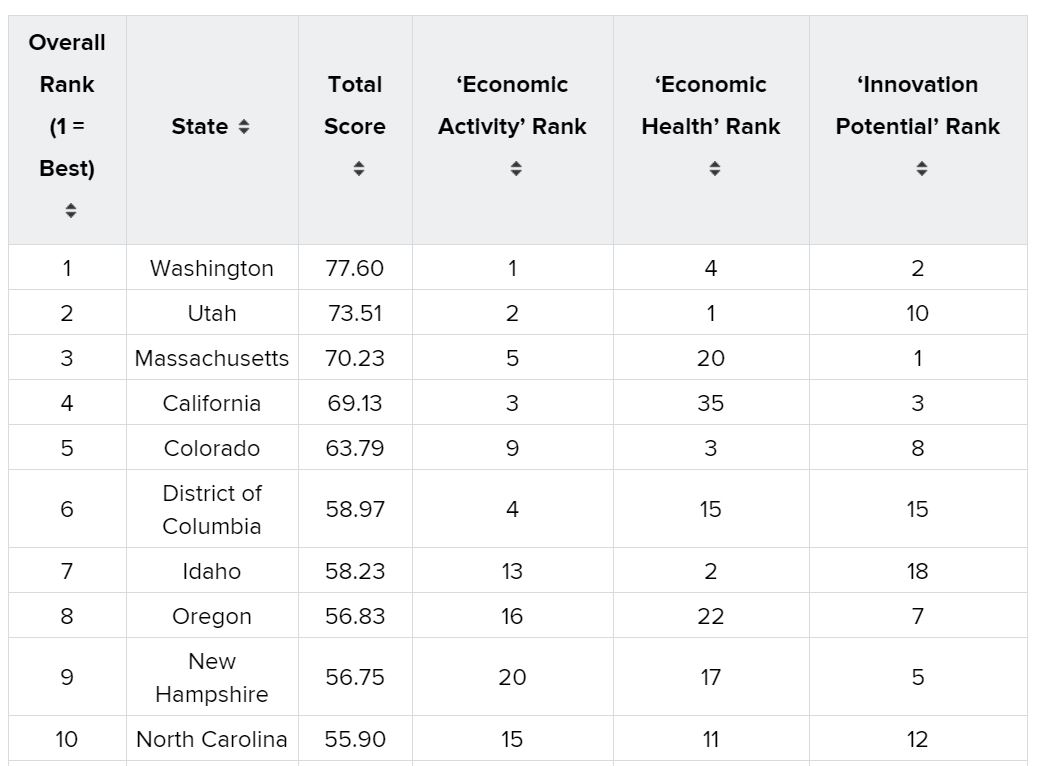