J.D. Power revealed that the mortgage industry’s promise of technology creating a faster and easier mortgage origination process does not appear to be fully recognized, as mortgage customers are reporting slower purchase processes.

Overall, the study found that overall satisfaction with mortgage originators decreased from last year due to a perception of a slower process, despite a significant increase in the number of customers applying online.

Overall satisfaction dropped eight points on a 1,000-point scale in 2017 due to this slower process. Time to close increased nearly one week from 2016 to 36 days in 2017, according to the study.

“We’re at a critical inflection point in the mortgage industry where new technology and the growing use of digital mortgage application channels has made it possible for the origination process to move more quickly; however, the customer is still the final judge of speed and quality,” said Craig Martin, J.D. Power director of the mortgage practice. “A critical element of satisfaction is setting expectations, and this tends to be a weakness of technology, which is demonstrated by substantially lower satisfaction among customers who do not work with a human to complete their application.”

For the first time in the survey’s history, refinance and purchase customers cite online as the most frequent method of submitting a mortgage application. A total of 43% of borrowers indicated they applied digitally in 2017, up from just 28% the year before. However, satisfaction among consumers who applied online plummeted by 18 points from last year, and trails in-person applications by 10 points.

“Quicken Loans is constantly setting the bar for the industry when it comes to both innovation and client service,” Quicken Loans CEO Jay Farner said. “There is no doubt that both are essential for creating the home loan experience that has led to our continued success.”

“We are fanatical about investing our time and resources into technology that enables us to provide the best mortgage process in the nation,” Farner said. “We are proud that we have ranked No. 1 in the country for eight years running and that speaks volumes to our thousands of caring team members as well as our millions of clients who trust us with financing their homes.”

Quicken also recently came out on top as the No. 1 lender ranked by number of purchase and refinance mortgage originations, the latest HMDA data from 2016 showed. Guild Mortgage ranked No. 16 overall in total number of loans originated.

“Our company is defined by our obsessive commitment to client service,” said Dan Gilbert, Quicken Loans founder and chairman. “Every inch matters to us. Every second counts to all of our team members who are singularly focused on delivering our clients the best experience they could possibly imagine when closing on what typically is the biggest financial transaction in their lifetimes.”

Here is a list where mortgage originators ranked, with five starts representing “among the best”, four stars representing “better than most”, three stars is “about average” and two stars is “the rest.”

J.D. Power explained Veterans United, Navy Federal Credit Union and USAA were profiled by are not rank-eligible because they do not meet the study award criteria. 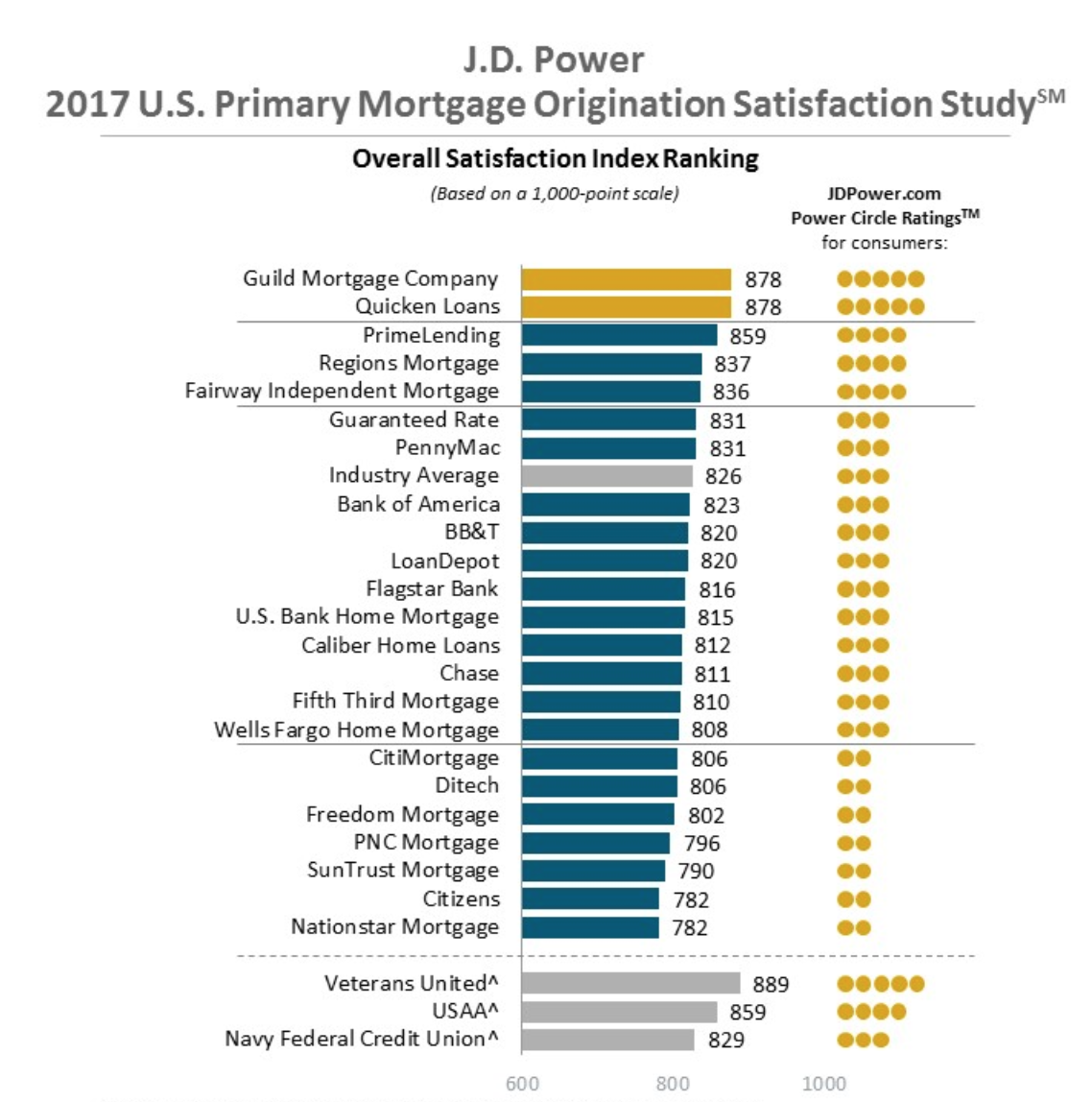 Stacking the deck: Does choosing the right technology stack give your brokerage a competitive edge?

HousingWire spoke to three brokerages to learn about their tech stack, which products they consider indispensable and which have helped them streamline their operations and increase profitability.