New home construction increased in August after a slight slowdown, however housing completions plummeted over the month, according to the latest joint release from the U.S. Census Bureau and the U.S. Department of Housing and Urban Development.

Privately owned housing completions dropped from July’s estimate of 1.197 million to a seasonally adjusted annual rate of 1.075 million in August. However, this is up 3.4% from 1.04 million in August 2016.

Privately owned housing starts decreased, but at a much more moderate pace in August to a seasonally adjusted annual rate of 1.18 million. This is down 0.8% from the previous month’s 1.19 million but up 1.4% from August 2016’s 1.16 million.

But the chart below shows despite the constant ups and downs, housing construction has shown a general increasing trend over the past five years. 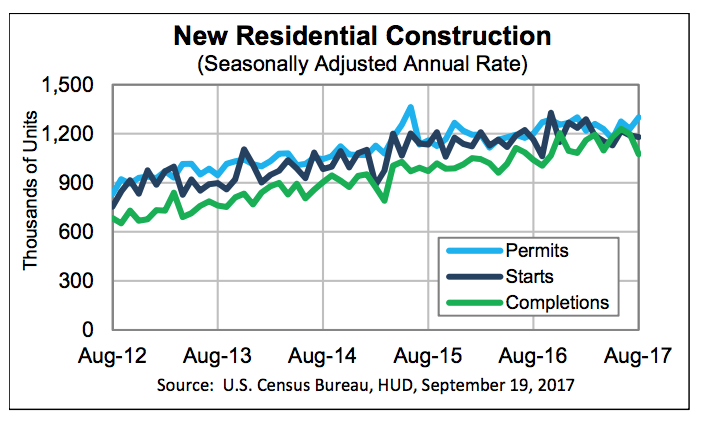 However, this monthly decrease is due to a drop in the multifamily sector. Single-family housing starts increased 1.6% from July’s revised 838,000 to 851,000 in August.

Building permits increased to a seasonally adjusted annual rate of 1.3 million in August. This is up 5.7% from July’s revised rate of 1.23 million, and up 8.3% from the 1.2 million permits in August last year.

Single-family authorizations, however, show a slowdown could be on the horizon as they dropped 1.5% from July’s 812,000 to 800,000 permits in August. But a drop in building permits isn’t the only factor predicting a future slowdown.

“Following August’s decline in new home construction, there will no doubt be a further temporary setback to housing starts in upcoming months due to the impacts of Hurricanes Harvey and Irma on Texas and Florida, respectively,” said Lawrence Yun, National Association of Realtors chief economist.

Yun said: “The nation’s housing shortage unfortunately looks to be with us well into the next year.”

The hurricanes even began creating a pull on builder confidence as they worry about labor shortages and the cost of materials which will be magnified by the recent storms.

However, another expert, who previously served as chief economist of Fannie Mae for more than 20 years, predicted that while the hurricanes might create a slowdown in September housing starts, it will also create an uptick for the rest of the year as disaster areas rebuild.

“Starts in the hurricane hit areas may be down again in September, but completely rebuilt homes will count as new starts, adding to housing starts in coming months as rebuilding commences,” Nationwide Chief Economist David Berson said. “The trend in housing starts should continue to be upward over the remainder of this year and in 2018, as housing demand rises boosted by the solid job market, wage gains that are edging higher, low mortgage rates, and accelerating household formations.”