Over the past 12 months, less than 10% down loans increased to a share of nearly 40% of all purchase loans, or about 1.5 million borrowers. Black Knight explained the higher number of loans is also due to a shift toward the purchase market and away from refinances.

This increase is significant considering the past four years all showed yearly declines in high LTV lending. Now, however, high LTV lending increased its market share as well as volume.

But while borrowers are putting less down on a home, the growth did not spill into the less than 5% down lending, despite lenders best efforts. This year, multiple companies announced a move into the 3% down market, but it seems the new products did little to inspire significant growth.

But Black Knight was quick to differentiate the housing market today from the pre-crisis era from 2005 to 2006.

“However, low down-payment purchase lending today has a much different risk profile than it did back in 2005-2006 during the run-up to the financial crisis,” said Ben Graboske, Black Knight Data and Analytics executive vice president. “At that time, half of all low-down-payment purchase originations involved piggyback second liens, as opposed to a single high-LTV first lien mortgage.”

“It’s also worth noting that while the total share of purchase lending going to borrowers putting less than 10% down was relatively similar then to what we see today, today’s low down-payment mortgage products and secondary risk characteristics are markedly different,” Graboske said.

He explained that while a large portion of low down-payment mortgage were adjustable-rate mortgages during the pre-crisis years, that is not the case today.

On Friday, HousingWire covered the latest phishing scam targeting Realtors, in which the sender accuses agents of certain violations and demands they pay a fine.

But it seems this isn’t the only scam Realtors should be aware of.

Later, the National Association of Realtors expanded upon the warning, saying texts are also being sent in NAR’s name saying agents won a prize, such as a car, and needed to pay the sales tax on it.

Here is an example of both kinds of scams: 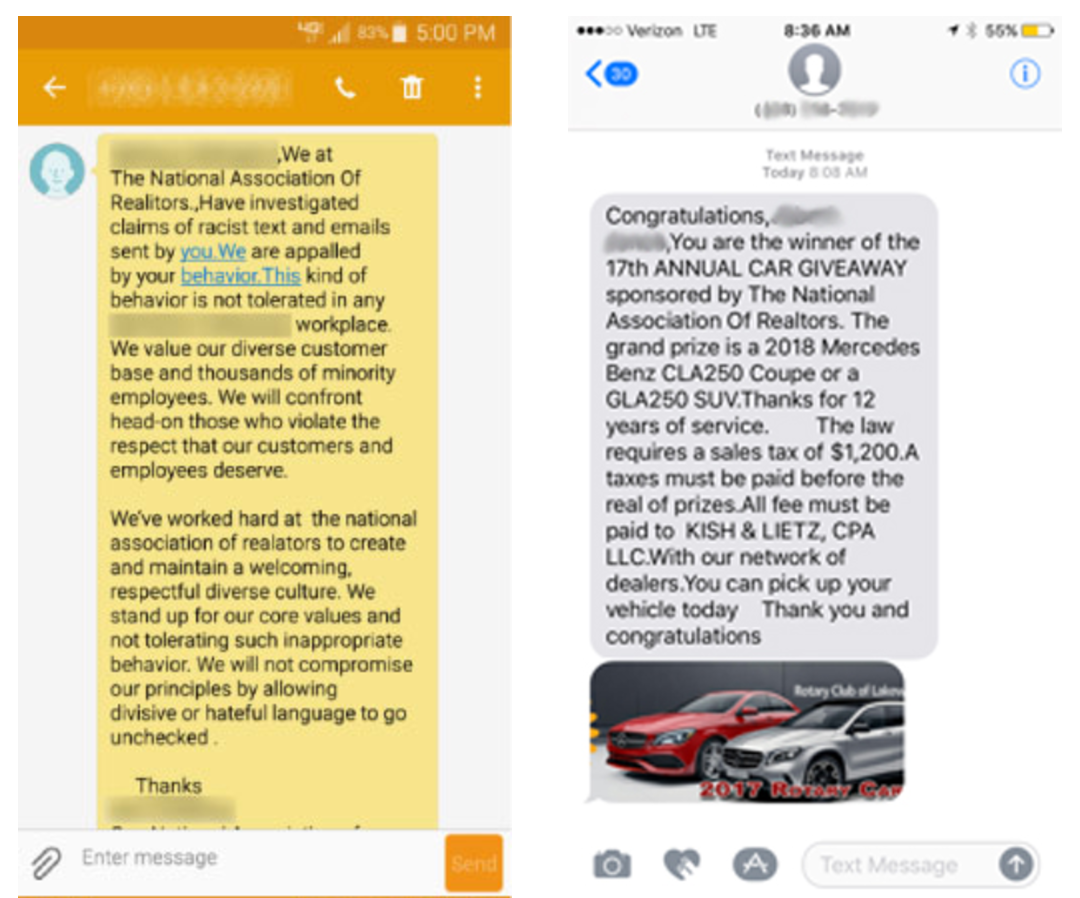 In addition to retweeting HousingWire’s warning coverage, NAR also tweeted out coverage of its own, warning Realtors to be wary of the scam.

NEW SCAM: If you receive a text message asking for payment of a fine or sales tax on a prize, it is not from NAR. https://t.co/taPZnaCsIL

To read more about what you should do if you think you receive a phishing text, click here.

In Florida, an expanding sink hole condemned yet another two homes as it grew by another 30 feet.

The Land O’Lakes, a Tampa suburb, sinkhole now measures 260 across at its widest point. The photo below shows a birds-eye view of the sinkhole.

The Land 'O lakes sinkhole has grown. This is what it looks like now. Photo from eagle 8HD pic.twitter.com/JoXEX1tPJg

Authorities said they can’t tell if the sinkhole is still active, and geologists will later inspect the area to make that determination, according to an article from CBS.

Officials said their main priority is to remove debris from the sinkhole and decontaminate the water, WTSP-TV reports.

They aren't sure what caused the destabilization, but think seismic vibrations from trucks and construction equipment around the hole could be to blame.

Originally, on July 14, the sinkhole suddenly destroyed two homes and forced another nine people to evacuate. Although five of the homeowners were allowed to return two days later, not everyone did so, saying they feared more problems, the article states.

And speaking of things suddenly disappearing without a trace, the Trump administration recently announced slashing the mortgage tax deduction isn’t off the table.

Ok, maybe not quite “without a trace” but President Donald Trump’s tax reform could bring a reduction to the tax deduction currently set at the interest on up to $1 million in mortgage debt, according to an article by Colin Wilhelm for Politico.

National Economic Council Director Gary Cohn, a key decision-maker on tax reform, explained to members of Congress that almost everything, including changes to the mortgage interest deduction, is on the table, according to the article.

That would be a slap in the face to an industry that strongly supported President Donald Trump during his presidential bid: He overwhelmingly won a straw poll by the National Association of Realtors during its annual meeting last year.

Nothing is set in stone, and the Republicans are continuing to work on a tax reform bill to present to Congress. And of course, the bill would need to make it past the Democrats in the Senate.

And if attempts at tax reform go anything like the recently failed health care reform, homeowners have nothing to fear.

HousingWire will continue to watch this issue, and bring you the latest updates.

Have a great week!