Freddie Mac started 2017 slightly down as the market adjusted to lower refinance volumes and rising interest rate levels in the first quarter.

The Federal Reserve began raising interest rates this year, with one hike in March and two more widely anticipated later this year.

Freddie Mac primarily attributed the decline in the company’s first quarter 2017 results to a reduction in market-related gains as interest rates and spreads did not change significantly in the first quarter of 2017.

Although, Freddie also noted that a continued solid business environment and it growing guarantee businesses helped offset the decline.

This quarter’s news comes after Freddie Mac posted its fifth-straight year of profits at the end of 2016.

But despite the slow start to this year, Freddie Mac CEO Donald Layton is positive on what this means for the GSE. “Our strong first quarter results, as the impact of moves in interest rates and market spreads was near zero, show how Freddie Mac is better serving its mission to responsibly provide liquidity, stability and affordability to the nation’s mortgage markets, and doing so in a taxpayer efficient manner,” said Layton.

“Our total book of guarantee business grew more than 6% in the last year to $1.9 trillion. We did this by improving the technology, products and level of service provided to our lender customers,” he said. “This enables them, in turn, to responsibly and sustainably provide more competitive pricing and terms to a growing range of homeowners and renters. At the same time, we continue to innovate in transferring mortgage credit risk to private capital markets.”

“Together, our efforts are building a better housing finance system for America’s homebuyers, renters, lenders and taxpayers. We’re proud to be a leader in this change,” he concluded.

This brings the total to $108.2 billion in dividends paid to Treasury

The chart below shows its dividend payments to Treasury sine 2008. 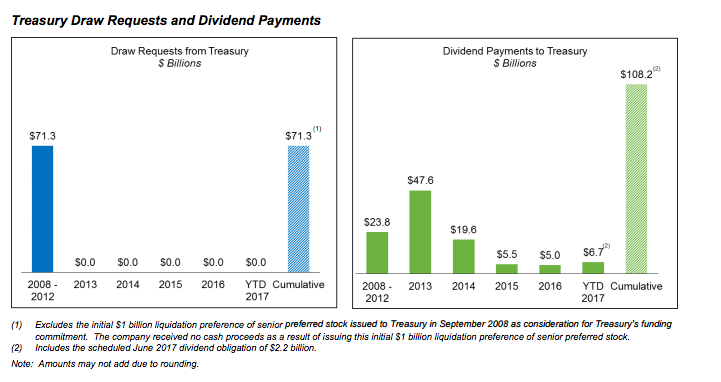 Adjusted guarantee fee income dropped to $1.6 billion, a decrease of $240 million from the fourth quarter of 2016. 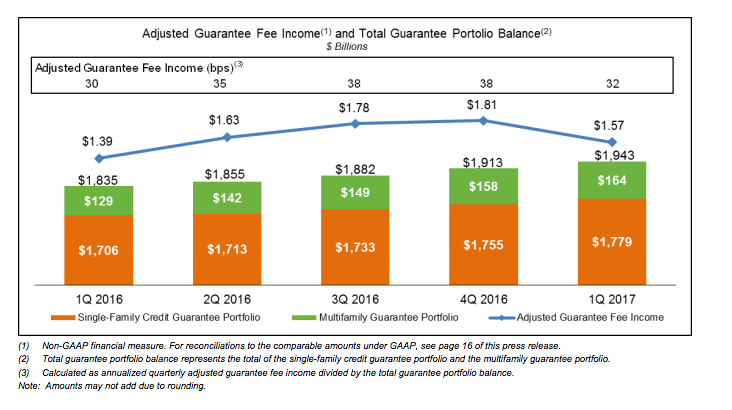