Wells Fargo missed fourth-quarter earnings expectations as it continues to clean up from its massive fake accounts scandal announced back in September 2016.

According to its release from early Friday morning, Wells Fargo posted total revenue of $21.6 billion, which is down $746 million from the third quarter 2016, but consistent with a year ago.

Wells Fargo is viewed as a great read on the pulse of the American economy since 97% of its revenue comes from the U.S, meaning investors will be paying close attention to the bank’s mortgage business.

On the mortgage side, Wells Fargo’s mortgage originations hit $72 billion, which is up 53% year over year thanks to strong refinance volume. The bank noted that 50% of originations were for purchases, compared with 58% in 3Q16.

However, residential mortgage origination revenue was down $87 million on a lower held-for-sale production margin. As a result, mortgage banking was down $250 million. A decline in servicing income also contributed the decline in mortgage banking, with income down $163 million primarily due to higher unreimbursed servicing costs.

Wells Fargo’s retail banking sales practices remediation plan update continued to be a main focus of its earnings report, with the scandal announcement only coming out four months ago.

At the core of the fake account scandal surrounding Wells Fargo right now is the fact that more than 5,000 of the bank’s former employees opened more than 2 million fake accounts to get sales bonuses.

In his update in the earnings announcement, CEO Tim Sloan said, "We continued to make progress in the fourth quarter in rebuilding the trust of our customers, team members and other key stakeholders.”

“I am pleased with the progress we have made in customer remediation, the ongoing review of sales practices across the company and fulfilling our regulatory requirements for sales practices matters,” he said. “As planned, we launched our new Retail Bank compensation program this month, which is based on building lifelong relationships with our customers.”

Earlier this week, Wells Fargo revealed how its new pay plan is going to work.

In a post on the bank’s website, the company said that new pay plan took effect on Jan. 1, 2017 and applies to “all branch team members, including managers, tellers, and personal bankers.”

In the post, the bank listed several “key aspects” of the new compensation plan, which can be found in more detail here and in charts below.

As of Dec. 9 2016, Wells Fargo said it has issued a total of $3.2 million of refunds for potentially unauthorized accounts that incurred fees and charges, including the addition of consumer and small business unsecured line of credit accounts, for the period of May 2011 to June 2015. 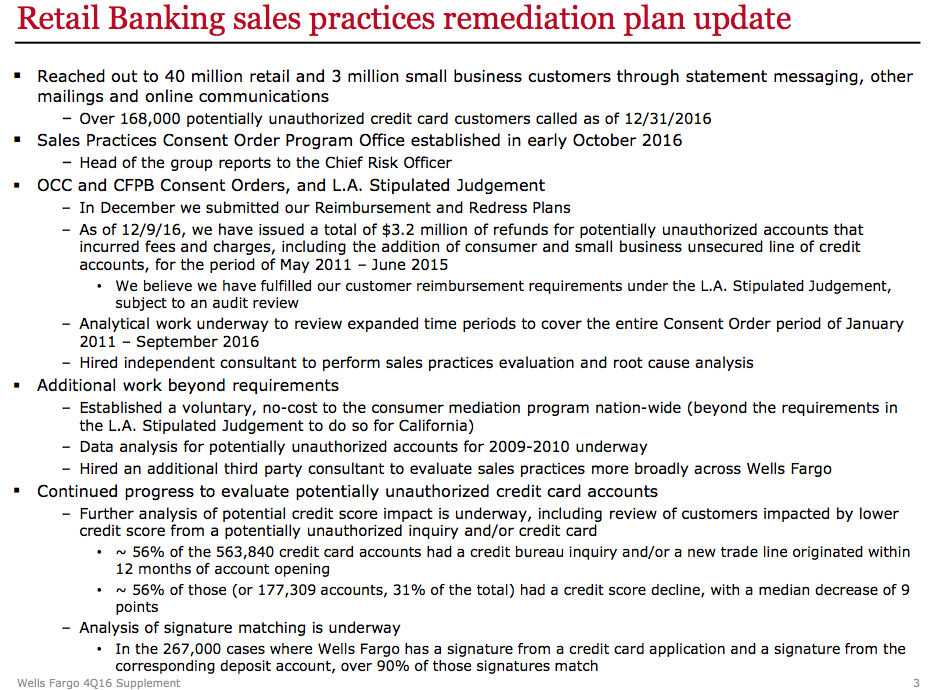 “While we have more work to do, I am proud of the effort of our entire team to make things right for our customers and team members and to continue building a better Wells Fargo for the future,” said Sloan.