After rising nine-weeks straight, mortgage rates finally recorded a decrease for the first time since the election, welcoming the year on a lower note, the latest Freddie Mac Primary Mortgage Market Survey posted.

Sean Becketti, chief economist with Freddie Mac, stated that this marks the first time since 2014 that mortgage rates opened the year above 4%.

In the two weeks after the election, the 30-year mortgage rate jumped 40 basis points, surging to to 3.94%.

Bankrate.com Chief Financial Analyst Greg McBride noted at the time that the week’s increase in mortgage rates was dubbed the ‘Trump Tantrum’, the biggest one-week increase since the ‘Taper Tantrum’ in June 2013.

Now, looking at the latest Freddie Mac report, the 30-year fixed-rate mortgage sits at 4.20% for the week ending Jan. 5, 2017, down from last week when it averaged 4.32%. However, this is still significantly higher than a year ago at this time when the 30-year FRM averaged 3.97%.

The 5-year Treasury-indexed hybrid adjustable-rate mortgage averaged 3.33% this week, moving up from last week’s average of 3.30%. A year ago, the 5-year ARM averaged 3.09%.

Check out the chart below for an overview of mortgage rates over the last year. 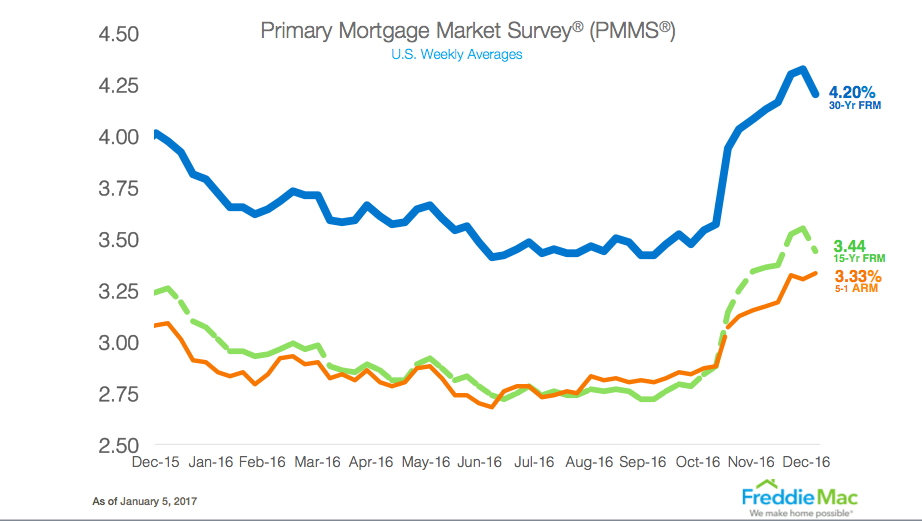